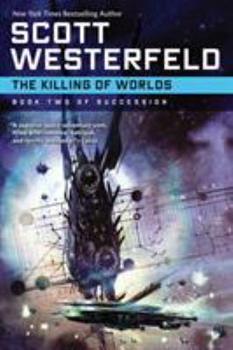 The Killing of Worlds

(Book #2 in the Succession Series)

#1 New York Times bestselling author Westerfeld continues one of the first great space operas of this century Scott Westerfeld, New York Times bestselling author of Uglies , Pretties , and Specials , reached new heights of excitement with The Risen Empire and left readers begging for more. He delivers the dazzling payoff in book two, The Killing of Worlds . The immortal Emperor can grant a form of eternal life-after-death, creating an elite known...

good end, but wish there was more!

Published by Thriftbooks.com User , 16 years ago
As the second half of a two-book series this is a pretty good book. Reccomended. Though, when you have a two-book series, the question is not so much is it worth reading the second book but is it worth reading both of them? To that I answer with a resounding yes. A great intelligent/hard space opera sci-fi book. My biggest issue with the series is that I wish it were longer. I respect the author's vision and would rather have two books full of interesting ideas rather than 6 diluted, stretched out and contrived books in a series that is just too darn long. The universe that Westerfeld masterfully illustrates left me wanting to know more about the Dead/the Grays and their motivations, more about the Rix, the Rix/Empire split, among many other things. I feel cheated that these two books are all we will get, though there are always other great books to read. Reccomended.

The tale is now complete.

Published by Thriftbooks.com User , 16 years ago
Those readers who enjoyed Mr. Westerfeld's "The Risen Empire," but were majorly (or even minorly) disappointed by its abrupt ending that left the tale half untold will be delighted to know that they can read this "sequel" without fear of being once again left hanging. Things are wrapped up nicely this time. "Killing of Worlds" serves up more of the author's character-based space opera (I called "Risen Empire" a space-soap opera), with no heroes and no villains--just people doing what they do. Once again, the tale is told from multiple points of view (whose pov you're now entering is clear from the chapter titles), with most of the characters from part I back (including the dead cats) and with some new ones as well. This time the centerpiece is a terrific space duel betwen Laurent Zai of the space frigate Lynx and a ship from the enemy empire of the tech-enhanced Rix. While the chase is going on Zai's lover, Senator Nara Oxham, is involved in a political duel of her own--against the immortal "Risen Emperor" of the Eighty Worlds, who has a secret that needs to be revealed. And in addition a Rix commander and her lover are aiding a Rix-designed AI "compound mind" that calls itself Alexander. The author moves things along swiftly to a breathtaking (and worldshaking) conclusion. Maybe you'll be surprised when the mystery at the heart of the tale (i.e., the Emperor's secret) is uncovered, but if so, you'll probably slap your forehead and think you should have seen it coming--the clues have been there from the start. Exciting. Well written. Fascinating tech. What more could you ask for? Well, a real sequel, perhaps?

Blame a "certain large bookstore chain" for the chop-job

Published by Thriftbooks.com User , 17 years ago
Westerfeld's website mentions that both books were intended as one, but a book chain balked at the 700-page length and demanded that it be cut in half (same thing that happened to Behemoth), to answer those criticizing the shortness of the two books. Anyway, this is truly smart and savvy space-opera, and without any aliens peeking their tendrils around any airlocks, and recently this has been one of my favourite types of SF book - the kind that skips over aliens entirely, which is good because most writers do an awful job of making them into more than stereotypes of some aspect of human behaviour (i.e can't make them alien enough). Westerfled would probably do a good job if he tried, but the Rix are sufficiently removed from modern humanity to qualify, and the other tribe of humanity we get a glimpse of (the Plague Axis) are also very original and a concept that does make a certain amount of sense. Having read Evolution's Darling first, I was surprised by the difference in these two books - a bit lighter but also much more fun and enjoyable, yet still with very dark elements. Definitely more mainstream than Evolution's Darling, and a better pair of books overall. Westerfeld also knows how to write-up a good rip-roaring space battle between only two ships, and give some of the terminology used in the book (Spinward Reaches? Sandcasters?) I think he may have been a Traveler player in a previous life... Overall, nothing bad to say about these books, other than the need to read them consecutively to really enjoy them. Here's hoping for a third.

strong sequel with room for more

Published by Thriftbooks.com User , 18 years ago
There's no reason to go into the background of this one since you really have to have read book one (The Risen Empire) so anyone who comes to this will already be familiar with the characters and setting. If you liked The Risen Empire, then you'll also like Succession, since it carries on the story in similar style and fashion. There are some differences. Westerfeld ups the tech-talk in this one and it isn't quite so smoothly integrated as in The Risen Empire. Or at least, it distracts a little bit more. Those well-versed in sci-fi hard science jargon might not find it distracting but as a rare reader of the genre, there were a few places where I could have done with a little less. Westerfeld employs the same structure as in book one, cutting back and forth between events in space with the captain and on-planet with the senator, as well as going back in time to their burgeoning relationship. He also cuts to the Rix warrior, but as she is on board ship with the captain for part of the novel, it's less often and less far astray setting-wise than in The Risen Empire. As in that first book, the cuts are handled deftly--they are never confusing and are often timed perfectly to keep tension high. Since there is less need to fill in societal background in a sequel, Westerfeld is freed somewhat to up the ante in terms of action and suspense; this holds especially true for the space battle scenes which have the captain leaping from the proverbial frying pan into the fire, but then adding to the proverb a few extra steps, such as throwing gasoline rather than water onto the fire. It all makes for an exciting plot which is enhanced by characters you care about and an underlying theme which leads to some larger, more philosophical questions beyond "how the hell do I get out of this." My one complaint about book one was that I thought it was slim enough so that one book would have sufficed. Succession is slim enough that I still think that holds true, but Westerfeld clearly leaves himself room (though it is an option, not a necessity) to make the work even longer. My only real complaint about the sequel (the additional jargon being a minor distraction) is that there wasn't enough of the house. I hope if he does continue it we get to return to my favorite multi-storied character.

Published by Thriftbooks.com User , 18 years ago
I loved The Risen Empire and have been waiting for the sequel impatiently. It's every bit as good as I hoped. In short, I read the book in one sitting completely unable to put it down. The Killing of Worlds begins with the space battle promised at the end of Empire. For a solid 170 pages, the Lynx and its Rix opponent struggle, employing opposing swarms of drone craft , vast clouds of kinetic weapons (manufactured diamonds), beam weapons, nano-infection attacks and stealth maneuvers. Quite simply, one of the most fascinating and intricate space battles every put on paper, and with realistic Newtonian physics to boot.Of course, the rest of Westerfeld's political and interpersonal conflicts are also playing out. The Rix commando and her hostage/lover effect incredible dirt-side assaults, and the Senate politics culminate in a dramatic trial and a revelation of cosmic significance. Even the flash-back arc bares unexpectedly wonderful fruit. A novel of wildly ambitious structure.I wouldn't read this book without having already read Risen Empire, but this extraordinary conclusion should win back those put off by Empire's cliff-hanger ending. I mean, come on, this is science fiction, a literature built on pulp dramatics, fix-up novels, and Saturday serials. With a pay-off this good, the wait was worth it.
Copyright © 2020 Thriftbooks.com Terms of Use | Privacy Policy | Do Not Sell My Personal Information | Accessibility Statement
ThriftBooks® and the ThriftBooks® logo are registered trademarks of Thrift Books Global, LLC