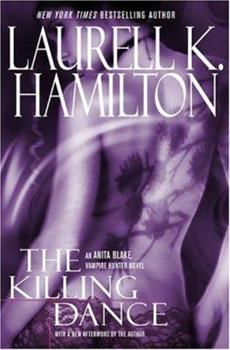 Dating both a vampire and a werewolf isn't easy. But just to complicate Anita's already messy life, someone has put a price on her head. Love cannot save her this time, so she turns to Edward, hitman extraordinaire, for help. But finding the person behind the threat won't be easy, because as both a vampire hunter and zombie reanimator, Anita has made a lot of enemies-both human and otherwise.

Published by Thriftbooks.com User , 16 years ago
Yep, this is the book. The book in the Anita Blake series where Anita finally bows to emotion and runs into the arms and bed of on of her two boyfriends. But which one? Is it studly Richard whom she hopes to marry, but who turns furry every month? Or does she run to Jean-Claude's cold but sinfully caring arms? Edward calls, and when Death calls it's never just for a friendly chat. He was offered a hit on Anita. Someone witha lot of money and hate to throw around wants Anita dead by an assasin's hand quickly. With that looming over her, the entire nation seeing her outed on tv as Jean-Claude's girlfriend, a murder investigation, a rotting vamp to fix, and Richard's full moon confrontation for the pack approaching the girl has her hands full. However the boys are playing nice together for once, and they want Anita to help them form a power triumvirate. Heady from the power and lust Anita raises an entire cemetery...and 3 of Jean-Claude's vampires. If this doesn't sound like enough action to cram into just a few days of Anita's life try this: Gabriel and Raina want her to star in one of their porno snuff films. It's an offer they won't let her walk away from. She also meets Damian, the pillaging vamp for the first time. And by the time the smoke clears, if Anita's still alive, she'll owe Death, a.k.a. Edward, a favor. Just another day in St. Louis! The rest of the series in order: Guilty Pleasures The Laughing Corpse The Circus of the Damned Lunatic Cafe Bloody Bones The Killing Dance Burnt Offerings Blue Moon Obsidian Butterfly Narcissus in Chains Cravings Anthology Cerulean Sins Bite anthology Incubus Dreams Micah Danse Macabre

As Satisfying as an Ice Cream Sundae

Published by Thriftbooks.com User , 20 years ago
I have read all of the novels in Laurell K. Hamilton's Anita Blake series and the "The Killing Dance" is one of the very best and my own personal favorite. Readers would be well-advised to start the series with the first novel "Guilty Pleasures" and enjoy the development of each of the characters instead of starting with this novel.The book explores the growth and development of each of four main characters; our heroine Anita Blake, junior-high school teacher and alpha werewolf Richard Zeeman, mysterious bounty hunter Edward, and master vampire of St.Louis Jean-Claude. A huge bounty has been placed on Anita's life by an unknown money-man and Anita must somehow protect herself until the time limit expires. Anita puts a lot of effort into survival, a skill at which she has had a lot of practice and at which she excels.Several plots run simultaneously throughout the book with the action being non-stop and rivetting. Everything ties together nicely at the conclusion, with just enough dangling ends to make us want to start the next installment "Burnt Offerings" right away.Anita's hard-boiled attitude and biting sarcasm provide several instances where the reader can't help but laugh such as her commentary on a dinner party; "There were three kinds of people at Catherine's dinner party; the living, the dead, and the occassionally furry." Her dry sense of humor serves to break the tension at just the right moment; "What do you say to boyfriend A when he finds you naked in the bed of boyfriend B? Especially if boyfriend A turned into a monster the night before and ate someone. I bet Miss Manners didn't cover this at all."Readers will devour this novel like an ice cream sundae; satisfying yet leaving you wanting some more. Top ratings are well-deserved.

One Too Many Monsters

Published by Thriftbooks.com User , 21 years ago
"The Killing Dance" opens with Anita being asked to lend her talents as a necromancer in an effort to save an ancient master vampire from a corrupting and degenerative disease. Anita agrees to help Sabin and his human servant, Dominic Dumare. Upon leaving this meeting Anita attends a party with her werewolf boyfriend, Richard, and receives a surprise phone call from Edward the bounty hunter. Someone has offered Edward a half-million dollars to remove Anita from this planet. Anita returns to her home with Richard only to walk into an ambush. Anita winds up with an apartment decorated in late assassin and an overly protective (?) hairy boyfriend.Richard has his own problems. He must share Anita with the sexiest vampire in St. Louis, Jean-Claude - Master of the City. More important, his struggle for dominance with Marcus and Raina, the current pack leaders, has split the werewolves. If Richard cannot overcome his reluctance to kill Marcus he will lose his chance, and the lives of many of his supporters will be forfeit. Even Anita knows that he must come to terms with his beast, yet she fears that she will not be able to handle it. And Jean-Claude? In the beginning, his worst problem is that Anita doesn't really want him. As the story progresses we discover that everyone else's problems are also Jean-Claude's. With this novel, Laurell Hamilton establishes herself as a master of the sexy vampire romance tale. A position previously monopolized by Anne Rice. A steady sexual pressure drives the world of vampire and werewolf politics, and Anita finds herself and integral part of the formula. Sensuality is not only a deep pulse underlying her relationships with Richard and Jean-Claude, it is also the key to pack dominance, and the power behind magical forces. Sex, in monster terms, is "The Killing Dance."Let the reader be warned that, as Anita works out her relationships with her competing lovers we will be treated to several steamy scenes that go far beyond the sly innuendo of Hamilton's previous novels. Some may be offended by the rising importance of Anita's romantic entanglements as a plot element. The author handle's this material with the same class and skill that she does the horror and suspense elements. I do feel that the Sabin subplot would have benefited from more development, and a more balanced book resulted. But there is only so much an author can do in a reasonable novel size. "The Killing Dance" appeals to a wider audience than Hamilton's earlier novels, bringing her a well deserved success.

Clear the calendar--you'll read this one in one sitting!

Published by Thriftbooks.com User , 22 years ago
I'm quickly making my way through the Anita Blake series. Any of these novels is a winner on its own, but you'll miss so much if you don't start at the beginning (GUILTY PLEASURES). DANCE, in my humble opinion, is the best book thus far in the series. The main characters (Anita, Jean-Claude, Richard, Edward) are much more developed, the relationships between them all are so well written that you start to feel like you know them. In DANCE, Anita faces the realization that a mysterious "money man" has put out a huge contract for her death. With the help of her friends (and I use that term for lack of a better word for these complex characters), she battles her way through shapeshifters, shooters, makers of shapeshifter-porno movies, vamps, psychopaths and cops. And then things get strange.... Forever undaunted, Anita arms herself to the teeth to protect her life as well as the "lives" of the men/undead/werewolf that she loves. DANCE also brings Anita to some decisions regarding her feelings for Jean-Claude, the seductive Master Vampire of the City, and Richard, the potential alpha male of the local werewolf pack. Who will she choose? Will she tell them both to take a hike? How will she reconcile her own ambiguous feelings about what it means to be a monster and what it means to be in love? All in all, this entire series is a great ride. Anita narrates each story. She's petite, she's pretty, she's tough. She doesn't need to be rescued because she's typically the one doing the rescuing! She's a necromancer with incredible powers, and these powers are more developed in DANCE through her relationship with Jean-Claude and Richard. Laurell Hamilton introduces new characters and brings in some old ones from prior novels. It's rather difficult to pin this series into one genre. It's part romance, part mystery, part detective, part horror, part gore, part vampire and all of the above. There's something here to please almost everyone. These books are fun, they're scary, and I guarantee you'll keep reading them to find out what happens next!

Published by Thriftbooks.com User , 23 years ago
Hi! I just finished reading the best series of books I've ever read. No, I'm not talking about the Chronicles of Nanya. I'm talking about the Anita Blake Vampire Hunter series written by Lauell K. Hamilton. Some of you might not like all this vampire and lycanthrope mumbojumbo, but I do. For all you who like to read about romance, humor, gore, and fantasy plus, check out these books! There are 7 books in this series which must be read in this order: Guilty Pleasure, The Laughing Corpse,Circus of the Damned, The Lunatic Cafe, Bloody Bones, The Killing Dance, and her newest one, Burnt Offerings. I remember as if it were yesterday...My friend, Keri, found the book Guilty Pleasures on her desk in music one day. She told me about it and let me read some of it in class. I loved it so much I bought the book. It took me 3 months to get to the store, but once I started, I couldn't stop! These books are like an addiction. I really want you guys to read these books because they're thrilling, suspenseful, fast-paced, and Anita, one of the main characters, always has more than one problem on her hands. Hamilton gives a very vivid description of the characters. For example, when Anita met Jean-Claude for the first time, the way uses Hamilton uses words carefully, it makes you feel as if you're sitting in the room with them. If I had to rate this book using the same scale as movie director's, I would give it an "R" because of its graphic violence, adult language and content, and nudity! Do yourself a favor - read these books!
Trustpilot
Copyright © 2022 Thriftbooks.com Terms of Use | Privacy Policy | Do Not Sell or Share My Personal Information | Accessibility Statement
ThriftBooks® and the ThriftBooks® logo are registered trademarks of Thrift Books Global, LLC