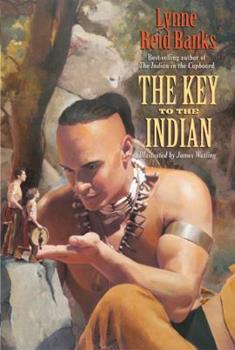 The Key to the Indian

(Book #5 in the The Indian in the Cupboard Series)

He felt a draft of cold air. Instinctively he put his arms around his body. Then he looked down at himself and got a shock. He was naked...His first instinct was to hid. he scrambled over the earth floor of the longhouse and ducked under the curtain. Beyond was deeper darkness, but he could make out a sort of room with a raised section against the wall. On this was a mountain range covered with fur, in the shape of a sleeping giant. Omri stared all...

Better than the last one-> an Indian adventure

Published by Thriftbooks.com User , 13 years ago
All of these stories by an English story teller are about historical events of plastic action figures like G.I. Joe? The magic of the box and the key are here transfered to a car key and father and son save Little Bear's band of the Mohawks by sending them north to the hard cold Canadian reservation. The admission that historically the British have been treaty breakers is probably good. Many an American knows that the Indians or Native Americans have been treated badly, even shamelessly by both individuals and government. The team of Omri and his father nearly die when white American settlers attack the Iroquian longhouse where they are staying. A well told story with a moral is worth many "magic adventures" in my book.

The Key To The Indian

Published by Thriftbooks.com User , 18 years ago
I really enjoyed reading this book. It was hard to understand at sometimes, if you had not read The Indian In The Cupboard. The adventure that Omri and his father go on is very exciting and suspenseful. If you liked reading The Indian In The Cupboard or any other of the sequels to this to this book, I'm sure that you will enjoy reading The Key To The Indian. I gave this book 4 out of 5 stars because of the thrilling adventure that Omri and his father go on. The book also includes historical features, relating to Little Bear and his bout with the Europeans trying to conquer the new land. I recomend that anyone who enjoys reading Lynne Reid Banks' work.

Legacy of the Longhouse

Published by Thriftbooks.com User , 19 years ago
Will this be the ultimate Going Back adventure for Ormi, the brave and clever boy who discovered the secret of the Indian--and a special cupboard? There is a twist this time, however, as Omri's father is in on the secret and the action. But Time Travel is hazardous even for adults; there are serious dangerss both to the travelers and those they visit in the Past. Little Bear's people are threatened with annihilation by American colonists; can 20th century British allies help them--or should they even try? It's an ethical dilemma: to balance respect for the integrity of the Past with loyalty to one's friends. In this fast-paced story the author examines the grim history of Native American vs White relations, allowing thereader to make the final judgment. But is it fair to exclude patient Mom--who passed on the family Gift to her son? And how to keep his meddling brothers in the dark as well? Family dymamics are both amusing and thought-provoking in this tale of honor and treachery, selfishness and altruism. Thanks to its deftly developed plot, THE KEY lives up to the promise of the first book in this delightful series. It's a story of Miniatures offering Maximum enjoyment. Kids of all ages will be immediately hooked.

the Indian in the Cupboard books are still good

Published by Thriftbooks.com User , 22 years ago
All the books Indian in the Cupboard series are good, but this, the latest, is one of the best. I liked how Omri's dad finds out about Little Bear and the others.
Copyright © 2020 Thriftbooks.com Terms of Use | Privacy Policy | Do Not Sell My Personal Information | Accessibility Statement
ThriftBooks® and the ThriftBooks® logo are registered trademarks of Thrift Books Global, LLC