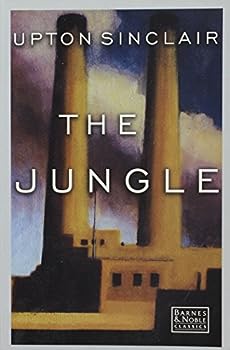 This description may be from another edition of this product. The Jungle is a 1906 novel written by the American journalist and novelist Upton Sinclair (1878-1968). Sinclair wrote the novel to portray the lives of immigrants in the United States in Chicago and...

A very important work for understanding our past and our future

Published by jayem , 1 year ago
Sinclair shows us every aspect of the plight of working class america in the early 1900's. It's easy to focus on his descriptions of the meatpacking industry, and the wrong-doings there, and miss his overall purpose. Sinclair systematically shows how unfettered capitalism destroys and discards good men and women for the purpose of profit, while capitalists live in ungodly luxury. He shows the corruption in politics and policing that benefit those in power. He then predicts the rise of workers revolution and justice that, ultimately, we see crushed in the following years in America. This is a must read.

Published by Thriftbooks.com User , 11 years ago
This is the item I was looking for and reasonably priced.I like the free shipping.

Published by Thriftbooks.com User , 12 years ago
Some years ago I subscribed to the "Biblical Archeology Review" hoping to find out what has been dug up in the Holy Land. What a dissapointment that was. The articles consisted of various scholars spewing venom at each other over their interpretations of archeological history without bothering to show any pictures. The last few reviews of The Jungle are of the same ilk. Give us a break. Sinclair was an unabashed Socialist, but I have yet to hear anyone tell us that he was lying about the conditions in the Chicago stock yards. In what pidgeon hole would you guys place Charles Dickens? He told the truth about living in poverty in England in the 19th century and was a crusader against child labor. Should the same epithets be levied against him? I was raised in an upper middle class WASP environment and had no idea how our beaten down and helpless citizens lived. When I was 17 and 18 I read The Jungle at least five times and was shocked to the point I couldn't sleep. I imagined living that way - helpless, hopeless and exploited to the point of death. It was economic slavery. And those conditions came to exist as the result of the same unbridled greed that resulted in the anti-trust laws, laws protecting workers who dared to form unions and, now, the ruination of our economy at the expense of people who need to rely on others to make a living. Now, 401(k)s are worthless and executives give themselves billions in bonuses from insolvent companies. What's the difference between now and the Chicago meat packing industry in the early 20th century other than the fact that the exploited workers don't come home filthy and odiferous? So what if Sinclair first published his book in serial form in a socialist newspaper? Do you think that Knoph or Harper & Rowe would have picked it up? Sinclair's book is a diatribe against greed and the only way out for workers were unions and unconventional social organizations. Life would be the same today were it not for unions, wage-hour laws and the minimum wage. And the unbridled greed of today will end up affecting the poor and wealty alike. Rather than spend time taking pot-shots at Sinclair, let's think about how the forms of greed he campaigned against have driven our entire country into insolvency.

Published by Thriftbooks.com User , 16 years ago
When I read Upton Sinclair's "The Jungle" in high school I had to keep reminding myself that that novel was written in 1906, otherwise I would never be able to eat another hot dog the rest of my life. Although muckraking is a term used to describe journalistic exposes, "The Jungle" functioned much the same way by bringing instant notoriety to the American meatpacking industry. In his story of the Lithuanian immigrant Jurgis Rudkus and his family, Sinclair revealed the unsanitary, dangerous, and inhumane conditions that existed in Chicago's stockyards and meat-packing houses. When the novel was published it became front-page news across the nation and President Theodore Roosevelt invited Sinclair to the White House to discuss his book. Because of this book the sales of pre-packed meat in the United States was cut in half and the public outrage would lead to the passage of both the Pure Food and Drug Act and the Beef Inspection Act. Sinclair's story was first published serially in "The Appeal to Reason," a socialist weekly and was dedicated to "The Workingmen of America." Clearly, Sinclair intended "The Jungle" to be a clarion call to socialism and a plea for the end of wage slavery, and ultimately he was disappointed by the reaction to his novel, writing once, "I aimed at the public's heart and by accident I hit it in the stomach." In this graphic novel adaptation of "The Jungle," artist Peter Kuper and his co-writer Emily Russell (who I believe is his daughter) clearly make an effort to get back to the basics and refocus the story so that this time it hits the heart. Originally published in 1991 as part of an attempt to revive the Classics Illustrated comic book line, Kuper uses a full-color stencil technique that suggests that particular period but anticipates, so to speak, the political art of the period before World War II. Jurgis Rudkus and the other characters are depicted with an almost doll-like quality, which eerily enhances the tragic story. Sometimes I think he looks like a clownish version of the Frankenstein monster, but I find that underscores the sense that Jurgis is up against a man-made monster in the unfettered capitalist economy that Sinclair depicts. To cut down the original novel to the 44-pages illustrated pages of this graphic novel, the mind numbing and health eroding work in the fertilizer plant is reduce to a couple of pages. This is why the focus in Kuper's version shifts from what Americans were eating to what is happening to Jurigs, as his personal tragedy becomes the heart of the story. Consequently, I find that this graphic novel version of "The Jungle" is not so much a substitute for reading the original novel as it is an ancillary work. More than with most such adaptations, you really have to have read (and vividly remember) the original work to appreciate what Kuper and Russell have wrought here. Even if consider socialism to be outdated, unnecessary and/or offensive, you have to admit that Sinclair

Captures the essence but not the power of Sinclair

Published by Thriftbooks.com User , 16 years ago
When reading this book, I don't know whether to be happy that more people will be exposed to the classic work by Upton Sinclair or sad that their only exposure will probably be through cartoons. "The Jungle" was a society-altering book when it exposed the graft, corruption and appalling conditions in the slaughterhouses and other work places. The main character is Jurgis Rudkus, one member of a family that immigrated to Chicago from Lithuania. He is a powerfully built, illiterate man, so he is well suited to perform the backbreaking labor that was the lot of such men. He works hard, but is injured and beats up a factory boss after he forces Jurgis' wife to have sex with him. Things get progressively worse, he is blacklisted and forced to take the most menial of jobs in the fertilizer factory. His wife Ona dies and his son Antanas drowns in the street. He then flees and becomes a vagabond; eventually returning to learn that Ona's brother Stanislovas was accidentally locked in a factory and eaten by rats. Ona's sister Marija is now a prostitute and she tells Jurgis that Ona could have supported them all had she become one when they first arrived. At the end, Jurgis is attending a socialism rally, where he feels that the speaker is talking directly to him. While this book captures the essence of "The Jungle", no cartoon synopsis can ever completely do justice to the power of Sinclair's words. My hope is that this book will be the catalyst for people to go on to read it and understand why unfettered, unregulated capitalism is a dangerous thing. It also shows why the threat of socialism was needed so that the workers could have a chance to live decent lives instead of wallowing in filth.

Unrelenting exposé of the capitalist meatgrinder

Published by Thriftbooks.com User , 19 years ago
Upton Sinclair unmasks turn of the century capitalist America in all its calculated savagery. The novel delivers a scathing general picture of the state of working conditions across the U.S., but it is best known for the mercilessly graphic descriptions of the slaughterhouses and packing houses of Chicago. The horrific and unsalubrious treatment of animals and meat is easily matched by the brutal treatment of workers, and the slaughterhouse becomes a larger metaphor representing the inhumane functioning of capitalism as a whole.Beyond the horrors of the factory floors, the narrative is also used very effectively to illustrate the complexities of graft, suppression of worker solidarity, media manipulation, duplicitous mass-marketing, etc., and it is a picture that remains highly relevant in today's world. True, the machinery of exploitation is more refined these days, and outright brutality, at least in North America, has been reduced. The fundamentals, however, are all depressingly familiar in spite of the passage of one hundred years.The story itself is ostensibly a 'bildungsroman' which follows the experiences of Lithuanian immigrant Jurgis Rudkus from his arrival in the U.S., to the horrific experiences he and his family suffer at the hands of the meat-packing industry, to his eventual conversion to Socialism. The bulk of the book traces the erosion of the community values which Jurgis brought over from the continent and their replacement with the dog-eat-dog mentality of individualist America. Jurgis eventually learns the ropes, but in the process, he is transformed into an unscrupulous monster consumed by self-interest. But at the very end of the book, even as he faces total financial and emotional ruin, an inspirational speech opens his eyes to an alternative vision of hope: that of International Socialism.This latter part of the story - which takes up the last 40 pages or so of the 400-page book - is much weaker than the rest. It is not because of any inherent weakness in the ideas, but rather it is the way Sinclair seems to have tired of bringing them alive with a credible narrative. Thus, for example, the emotional implications of Jurgis's epiphany are explored only very superficially (as opposed to the relatively thorough treatment given to the disasters which befall him earlier), and this sudden change of focus leaves his transformation looking somewhat contrived.Nevertheless, if the last 40 pages are a disappointment in literary terms, the previous 350 are absolutely outstanding. Five stars are well-deserved, even if the fifth is slightly tarnished....

The Jungle Mentions in Our Blog