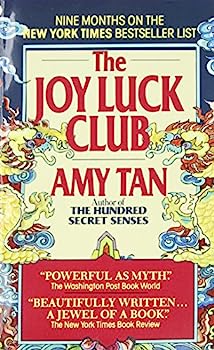 "The Joy Luck Club is one of my favorite books. From the moment I first started reading it, I knew it was going to be incredible. For me, it was one of those once-in-a-lifetime reading experiences... This description may be from another edition of this product.

excited to read but the condition of the book is awful

Published by PiggyMom , 2 months ago
Water stains, pages folded, one corner ripped off. The condition is in no way near "very good." But it's a good read. Definitely recommend the content!

the book is gone yellow

Published by Shirley , 5 months ago
I really disappointed in the book condition. The book is very old and papers are all yellow colored. What's more, one corner of the back cover was cut.

Buyer Beware - book was in Russian!!!

Published by Het , 1 year ago
I bought this book used and no where in the description did the say the book was in a Russian translation!!! Supremely disappointed when I received the book and had to BUY IT AGAIN. Hoping this time it is in English.

Published by Thriftbooks.com User , 18 years ago
What did you think the book was? The title is in Spanish!!

A Tapestry of Stories

Published by Thriftbooks.com User , 18 years ago
Amy Tan's novel of many voices has become required reading in high school and college contemporary literature courses - and for good reason. Its intimate look at Chinese immigrants and their children opens up a wealth of questions about cultural acclimation in a country dominated by another race. Set in San Francisco and China, the novel begins with Jing-Mei ("June"), who has been asked by her father to take her recently deceased mother's place in the Joy Luck Club, ostensibly a mah jong gathering of her mother's closest friends, but also an investment club, symbolizing the merging of the two cultures. June agrees, although she doesn't feel she makes an adequate substitute for a woman who seemed so unlike her. When her "aunties" urge June to tell her sisters, women she has never met and who were left at the side of a road in China, about her mother's life, they are troubled when she confesses that she did not know her mother except as a mother. She sees that they fear that their own daughters might not know about them, and so she impulsively promises to find her mother's long lost children and tell them about their mother. In this way, the novel sets up its structure of interrelated stories. Although the stories of June and her mother Suyuan frame the others, those of An-Mei, Rose, Lindo, Waverly, Ying-ying, and Lena are no less important. These women and their daughters form a complicated quilt of what it means to be a Chinese-American, whether born in China or in the United States, and they highlight the difficulties of bridging two cultures. The choices each woman makes are always difficult and often heart-breaking. Students might want to explore the difference in attitude between the Chinese women and their American daughters. Other topics for discussion include comparing and contrasting the relationships; the meaning of "Chinese blood" in the context of what unfolds; whether this is a true novel or a collection of stories; the ways in which the title refers not only to the actual Joy Luck Club but to the book in general; and the use of voice to convey characterization. This accessible, well-written first novel is not Amy Tan's most accomplished (see The Kitchen God's Wife and The Bonesetter's Daughter), but it is her most widely read. Highly recommended for a general readership.

Heart-warming story of four mothers and their daughters

Published by Thriftbooks.com User , 23 years ago
Amy Tan writes about four mothers struggling through the hard times in life in order to live a better one in the future. The Joy Luck Club formed by four women in China allowed them to share their stories and forget their worries. These four mothers hoped that raising their daughters in America and raising them the American way will give them a more successful life. They hoped that their daughters will learn to take better steps in life, than to take the wrong ones that their mothers have taken in the past. But the relationship between a mother and a daughter is so deep that they learn that a piece of their mother's personality traits will always be with them. And no matter how Americanized a child may be raised, she will still see a Chinese part of herself inside. Amy Tan really has her own style of writing. She includes Mandarin lines which makes it interesting and her book is so detailed that it seems believable and very realistic. Each page is so touching that it makes me want to go onto the next to read what happens after. I would say that this is one of the best books I have read.

The Joy Luck Club Mentions in Our Blog