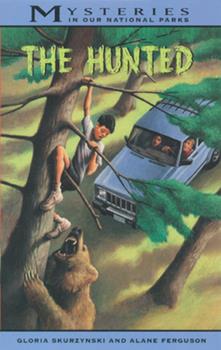 The Hunted (Mysteries in Our National Park)

(Book #5 in the Mysteries in Our National Parks Series)

This description may be from another edition of this product. Grizzly cubs are disappearing from Glacier National Park, and the Landon family must figure out why But for Jack, the real mystery is his sister Ashley's strange behavior. What was she doing alone in...

Published by Thriftbooks.com User , 15 years ago
The Hunted I thought this book was absolutely great. It had excellent detail and was very suspenseful. This book is in a series, but I've only read a few of the others. I think this is one of the best ones because it is thrilling and suspenseful and it makes you want to keep reading and reading. This is a book about Jack and Ashly and their parents going to Glacier National Park to solve a mystery on the missing grizzly cubs. They read a newspaper about a Mexican boy who crossed the border 3 times. Twice he got caught and got sent back, but this time they can't find him then Jack finds out that Ashley is hiding him in their trailer. The next thing they know they are face to face with a crazy grizzly ready to attack. I recommend this book to someone who likes mystery books or someone who is 8-13 year old.

The Hunted by Gloria Skurzynski

Published by Thriftbooks.com User , 16 years ago
Jack and Ashley Landon are the main characters of the book. Jack is older and somewhat bossy. He is also an ameture photographer. His sister, Ashley, read a book she was not supposed to read about grizzly bears and she was very afraid of them. Also, she helps a mexican boy in this book. The plot is when grizzly bear cubs start disappearing. Then, the Landons go to see what's happening. Then, Ashley tries to help a mexican boy named Miguel. Then, they find poachers stealing the bear cubs. After that, the grizzly bear mom charges Miguel. Last, the thievery problem was solved. Along, with many others. The setting is Glacier National Park, several years ago. The theme is saving the bear cubs. The main reason i like this story is the fact that the grizzly bear mom and the rangers came to the rescue of the three kids.

Published by Thriftbooks.com User , 16 years ago
the thing i liked about it was it had a good ending and that not only the adults where apart of the mystery. also how the kids tryied to do stuff by theirselves. i didnt like how the mystery was solved so fast. this was a good book and i would suggest you tead it. it is a good and intresting book.

Published by Thriftbooks.com User , 21 years ago
WOW! I ordered this book for my 10 year old daughter, but read it first. I loved it and so did she. The adventure takes place at Glacier National park in Montana with brother and sister Jack and Ashley Landon. This is a series of books that takes the duo on many adventures to the various national parks in the United States. There is always a hair-raising experience, plus the added benefit of learning about nature, geography, history and wildlife. My daughter particularly enjoyed learning so many amazing facts about Grizzleys. I highly recommend this book--not only will your child love it, but so will you!
Copyright © 2020 Thriftbooks.com Terms of Use | Privacy Policy | Do Not Sell My Personal Information | Accessibility Statement
ThriftBooks® and the ThriftBooks® logo are registered trademarks of Thrift Books Global, LLC