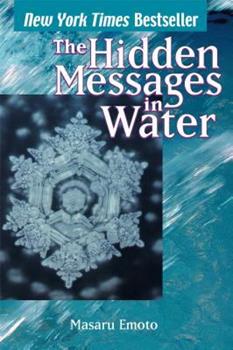 In this New York Times bestseller, internationally renowned Japanese scientist Masaru Emoto shows how the influence of our thoughts, words and feelings on molecules of water can positively impact the earth and our personal health. This book has the potential to profoundly transform your world view. Using high-speed photography, Dr. Masaru Emoto discovered that crystals formed in frozen water reveal changes when specific, concentrated thoughts are...

Published by Kasperdoo , 1 year ago
This is one in a series of books that are must haves for your library, if you are involved in the stewardship of our planet, interested in the metaphysical or just plain curious. Masaru Emoto came up with a theory that just makes sense- and as you read, you will agree- Not only in words, but also in pictures. We are made of mostly water, and are influenced not only in a physical level, but also on subtle levels. I say this as a scientist, but also believing in the spiritual nature of the Universe. I had the great fortune to meet Masaru Emoto before his death, hear him speak, and to have him sign my books. Unfortunately, they were stolen, and although I can replace them, I can never replace his precious signature. Even if you do not fully agree with his theories, take the time to let them initiate profound thought towards our Universe, our planet, and our interconnectedness.

Published by Lee , 2 years ago
This book talks about the power of water and how we can influence. Amazing read.

Published by Tarnished Knight , 3 years ago
Dr. Emoto presents the results of his research on water, in such a way that it compels you to consider these results and the significance they may have on our daily lives. As presented in this book, water is not just a requirement for our survival, but almost a living, sentient, ally (or enemy) to our well being as well as our existence. A must read for anyone interested in Folk remedies, Homeopathic or Riki healings, or similar organic based health and healing regimes.

Published by Difundelaluz , 3 years ago
Fascinating book. If you understand how plants respond to music and utilizing a soothing voice around them, it's not much of a leap to wrap your mind around the concept that water is also alive and responds to the vibrations around it.

Published by Thriftbooks.com User , 16 years ago
Other reviews that criticize the fact that Dr. Emoto does not use the peer review process fail to appreciate the fact that this is observation, not experimentation. All good academics know that observation is something that is easily duplicated (or not) under an individual microscope. To present a paper on observation is folly -- it would never get published. Therefore, these criticisms are pointless. Get yourself a microscope and see if what he observed is what YOU observe. The beauty of this book is its timeliness. But are we, as a species, ready to think about what this means -- provided it is duplicated under the skeptics' microscopes? Dr. Emoto's observations are graciously shared with those who openly embrace the lessons that he observes. Perhaps they should have come centuries sooner, but they are here now for those who are ready and want to learn a little more about the real meaning of the old cliche "water is life".

"Not only is the universe stranger than we believe...

Published by Thriftbooks.com User , 16 years ago
it is stranger than we can imagine..." so suggested America's last Renaissance man, Issac Asimov. Masaru Emoto clearly subscribes to this proposition, and while no doubt incurring the wrath of many who kneel at the alters of those twin deities, Rationalism and Scientific method, he has authored a book and expoused theories which place him in pretty heady company: Arrhenius who was given many trips to the woodshed for suggesting that atoms were composed charged particles when it was heresy to suggest that atoms were anything but indivisible; Hans Alfven, the father of galaxy-scale plasma dynamics, who was derided for decades for suggesting what is now a given concerning solar physics: the idea that plasma physics is of equal or greater importance than gravity; Subrahmanyan Chandrasekhar who was fairly driven out of England by his colleague Eddinton in 1930 for positing the exisence of black holes--a notion which ultimately brought other scientists a Nobel prize. The, too, there was C.J. Doppler, infamous in 1842 for identifying the effect now named after him; William Harvey who postulated the ludicrous notion that blood circulated through the human body; Galileo, Karl Gauss (the father of Non-Euclidian Geometry), Lister who advanced the concept of sterilization, and Marshall who believed stomach ulcers were not caused by acid but by h. Pylori bacteria. We could conclude this far-from-all inclusive list with my personal favorite among demonized scientific trailblazers, Ignaz Semmelweis, who eventually died in an asylum for expousing the ridiculous notion that the simple act of handwashing by examining physicians and nurses could stop puerperal fever, a virulent disease that killed large numbers of new mothers. Well, I'm sure you get the point. Now, we have water that thinks, or, at least, water that reflects in its structure thought patterns--a substance that florishes to Bach and Handel but that languishes if subjected to Metallica. This notion, not surprisingly, violates some of our most fundamental, common-sense beliefs concerning nature. However, it would seem not such a vast leap of faith to assume that water could be affected in some way by human thought just as red blood cells were found by Braud, Davis, and Wood in 1988 to undergo a decreased rate of hemolysis when 32 volunteers visualized protection of the cells. (This result was far greater than would be expected by chance, p Emoto has given the reader who can apply William James' "willful suspension of disbelief" a facinating and uplifting read. His thought-provoking photographs seemingly possess the power to elicit either disdain or a sense of astonishment and empowerment, depending on one's core beliefs. As a final note, there are two mistakes we can make with respect to extrordinary claims: we can believe everything we hear or we can believe nothing. The middle path of the aformentioned "willful suspension of disbelief" would often seem the most intellectually honest positio

Hoax or not, Love & Gratitude are a good idea.

Published by Thriftbooks.com User , 17 years ago
"If we fill our lives with love and gratitude for all, this consciousness will become a wonderful power that will spread throughout the world. And *this* is what the water crystals are trying to tell us." p. 146 I began this review with the above quote, because in the speculation of whether Emoto's work is legitimate or a hoax, this message often gets lost. Masaru Emoto is a science hobbyist in Japan, who photographs ice crystals under a microscope using a technique described in the book's prologue. (His doctorate degree is from a 2-year alternative medicine correspondence course in India.) He says that when he exposes the pre-frozen water to positive energy such as classical music or the words "love and gratitude," the crystals are beautiful and well-formed. On the other hand, crystals exposed to negative energy such as heavy metal music or the words "you fool" are ugly and malformed. Forty percent of the book is devoted to photography of crystals exposed to various music (including Elvis' Heartbreak Hotel and Austrian yodeling), energies (including the words "You make me sick!") and crystals from various polluted and non-polluted bodies of water around the world. The one-star reviews claim this is not science, end of story. Having read every word of this book, I conclude this: Emoto's claims, whether legitimate or false are too important to be ignored. If they are true, then here is tangible evidence that our thoughts and the words of others can change our body chemistry, given that our bodies are approximately 70% water. This would make sense in light of other research on the effects of prayer and on the mind/body connection. If his claims are false, than hundreds of thousands of people have bought books showing beautiful crystal photography and have held the vibration of "love and gratitude" in their hearts. Emoto has a degree in international relations, so it's possible he's embarked on a creative way to reach world peace one reader at a time. The way to judge whether this is a hoax is to attempt to replicate Emoto's research. In this book, Emoto himself invites people to replicate his work. This invitation, as well as the rest of Emoto's book strike me as sincere. While it's premature to say whether this is a hoax, faulty science, or legitimate, I think it is a good idea to hold the vibration of love and gratitude and listen to soothing music. This book also discusses related experiments, such as British scientist Rupert Sheldrake's work on morphic fields and telepathy, experiments of hundreds of individuals standing around lakes attempting to improve the water quality through chanting and prayer, and experiments where dozens of Japanese families exposed grains of rice to positive or negative energy or simply ignored the rice. Whether a water crystal, an entire lake or a grain of rice, positive energy was found to have a positive impact. It makes sense, after all, positive energy positively impacts other humans and
Trustpilot
Copyright © 2022 Thriftbooks.com Terms of Use | Privacy Policy | Do Not Sell or Share My Personal Information | Accessibility Statement
ThriftBooks® and the ThriftBooks® logo are registered trademarks of Thrift Books Global, LLC