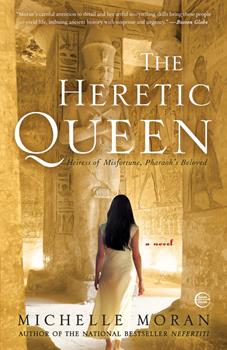 In ancient Egypt, a forgotten princess must overcome her family's past and remake history. The winds of change are blowing through Thebes. A devastating palace fire has killed the Eighteenth Dynasty's royal family--all with the exception of Nefertari, the niece of the reviled former queen, Nefertiti. The girl's deceased family has been branded as heretical, and no one in Egypt will speak their names. A relic of a previous reign, Nefertari is pushed...

Published by Melissa , 2 years ago
I love this author and her books, so I was hoping to receive the quality I requested. Unfortunately my book is missing the beautiful dust jacket. I will still read the book obviously since it’s not extremely important, but I was a bit disappointed.

Published by Thriftbooks.com User , 13 years ago
This novel commences several years after the events of her first novel, Nefertiti and so is about a different generation than Nefertiti, but it still ties up any loose ends you were wondering about from the previous book. As the sole survivor from the previous royal line the orphaned Princess Nefertari (who assumes the role of story narrator this time round just as her likeable mother Mutnodjmet did in Nefertiti) is much more like her mother than her aunt (Nefertiti). She has been raised at the court of the current Pharaoh, Seti I, and alongside the royal heir, Ramesses. As she grows up, the a friendship blossoms between Nefertari and Ramesses though its her bitter rival Iset who secures marriage to Ramssess first and that threatens to snuff out the unmarried princesses ambitions for romance and glory. Its all made worse given few at court want Nefertari as Egypt's queen (given her connections to "the Heretic Queen of past: Nefertiti) and her enemies try to turn the people against her, too. But neither obstacle, conflict, or Iset will prevent this woman of beauty, energy and intellect competing for the throne of Egypt in an breathtaking and absorbing journey. I would dub it a contest of the better match for Ramesses vs the better match for a superstitious people. The story formula is as per her successful debut novel "Nefertiti" ie dueling contenders for the Egyptian throne, lashings of romance, doses of court intrigue and powerplays in an historical three way romance. But the major difference with this work is that Nefertari and Ramsesses II unlike the self indulgent and massively obsessed Akhenaton and Nefertiti are characters one can truly admire (in both story and real life). The change from a large "anti hero/heroine" work like Nefertiti to "worthy hero/heroine" work in this case gives is the one major difference readers will find in the 2nd work. So if you like Morans style but prefer something more uplifting morale wise than "Nefertiti" then this is it. Kudos for Moran though is she is rapidly gaining on my favourite Egyptian authoress Pauline Gedge in terms of ability combining intricate beauty and lucidness of prose with a penchant for great story telling. If you can set aside a slight literary licence taken by the authoress (for Nefertari and her connection to Nefertiti is questionable) then you truly enjoy an engrossing and fascinating pager turner. The constant conflict is splendidly handled (riveting in fact), the characters more fleshed out in this the authors 2nd novel and the palaces and landscapes of Ancient Egypt are also described in far greater and more skillful detail than in "Nefertiti" such is maturation of the authors prose. Its a case of less fluff and more substance to her prose on this outing. Look out too for an Egyptian calendar at the end of the book, not something I can say I have come across but an interesting "extra" for those keen to match it with our own modern calendar. Cant wait for the next work: Cleop

Published by Thriftbooks.com User , 13 years ago
Michelle Moran is my newest favorite author. Her books are well crafted and meticulously researched. The historical part of her work is amazingly vivid; she really brings ancient Egypt to life. But this can be a problem for some authors; while they excel at research and writing a historical scene, their characters are flat. The fiction part of their novels are left wanting. Thankfully, Michelle is just as talented at writing her characters as she is at researching them - her novels really are not to be missed. I would really recommend reading Nefertiti before The Heretic Queen. It's not necessary; they are written as stand alone novels and function well as such. But in order to understand the hurdles that Nefertari must clear, it is helpful to have read an account of her aunt's tumultuous reign. Nefertari herself is a wonderful character. She is smart and rational, but at the same time, she is very vulnerable. Her mother, Mutny, was the narrator of Nefertiti, and was definitely the most sympathetic character in the book. Nefertari is the same way, though I do like seeing the book through her eyes, rather than the eyes of someone watching on the sidelines. Moran made a wise choice in narrators, making her voice clear and strong. Moran's next novel, Cleopatra's Daughter, will be about the surviving children of Cleopatra and Marc Antony. It sounds like it will be an amazing read, and I can't wait for its release next year.

Michelle Moran hits a home run with her second novel!

Published by Thriftbooks.com User , 13 years ago
Having read and enjoyed Nefertiti, I was really looking forward to reading this novel. I admit it was with a little trepidation as so often a much anticipated novel fails to live up to expectations, at least mine anyway!! I'm happy to report that this novel not only lived up to its hype but it exceeded it by far. This is the story of Nefertari, niece of Nefertiti, the "Heretic Queen" and Ramses II. There is a beautiful love story between Ramses and Nefertarti, plenty of palace intrigue and plotting and scheming, battles, wars, pirates, evil priests, loyal friends, grand palaces, and even grander tombs. The author does such a good job of describing ancient Egypt that even though I know next to nothing about it, it came alive for me as I read. I could smell the figs wafting on the breeze, hear the roar of crowds, and practically see the grandeur of Egypt's Nineteenth dynasty. Nefertari was a far more likeable heroine than Nefertiti and Rameses was a real hero as opposed to the self absorbed slightly psychotic Akhenaten from the author's first novel. The love story between Rameses and Nefertari was all the more special because it is real. Declarations such as: "My love is unique--no one can rival her, for she is the most beautiful woman alive. Just by passing, she has stolen away my heart" have stood for centuries as testament to one of the greatest love stories in history. If you liked Nefertiti, you will love The Heretic Queen. I highly recommend it! 5/5 stars

Walk like an Egyptian..all the way to the book store & pick this up!

Published by Thriftbooks.com User , 13 years ago
Ever since I was a little girl I have had a fascination with Egypt. My mom would buy me books with pictures of Egypt; the pyramids and artifacts and I would just eat it up! I'm not sure what's behind all the fascination, but I like to think that maybe I was there in another life. Michelle Moran brings me back home in The Heretic Queen. It is a tale of Nefertari, who was hailed as the Warrior Queen by the people in Egypt and was known for her knowledge of 8 languages. Nefertari was the Chief Wife to Rameses II (Rameses the Great) and it was truly a love match. The Heretic Queen follows the life of Nefertari as she becomes one of the most well-known Queens of Egypt. This is a story filled with passion, deception, intrigue, adventure and best of all, love. And we all know...all you need is love! Rameses and Nefertari were very much in love, and it shows by the passage Rameses had written on her burial chamber wall: "My love is unique and none can rival her...Just by passing, she has stolen away my heart." This is a fantastic novel that I recommend to anyone! Moran is an excellent writer and can pull you right into the story...right into Egypt...smell the incense....taste the pomegrante wine. This is a book where you can just disappear into another world for hours on end and not ever want to leave. This is the kind of book that gets me in trouble because I tune out/ignore everything and everyone around me! I am so excited for her next book, Cleopatra's Daughter, which is about Cleopatra's children with Marc Antony. The release date is September 15, 2009.

Michelle Moran does it again!

Published by Thriftbooks.com User , 13 years ago
As we all know the Heretic Queen is Ms. Moran's second book. Once again she explores the ancient world of Egypt, something very few historical fiction authors have done. The novel is about Nefetari who is well versed in various languages, doesn't shy away from warfare and is a very intelligent young woman. However, she is niece of Nefertiti and with that comes a lot of baggage. Since her aunt is called the "heretic queen" Nefertari is seen as an unimportant princess. Nefetari is dislike by the people, those at court don't want her around, and people shun her. Nefetari's family name has been tarnished and their sins cast a shadow over everything she wants to accomplish in life. How can she become the wife of Ramesses when everyone around Nefetari hates her? Iset, Ramesses first wife, seeks to become his Chief Wife and keep Nefetari at bay. Determined to have the world remember her family's name she seeks to win Ramesses heart and become Chief Wife while those around her try to destroy her. For those looking for the biblical Mosses he's not in it, and Ms. Moran explains why she left him out in her historical note. Personally, I'm not a fan of biblical stories so I didn't miss Moses in the novel. I know nothing about Egypt. I think most of us have studied it in high school, and maybe took a course in college. I don't remember much, and when I read The Heretic Queen I was pleased to see Ms. Morgan gives sufficient details in her novel without it becoming longwinded or like a history lecture. There is a fine line to be walked, and I think she did it wonderfully. As a reader I felt immersed in Egyptian culture. At the back of the novel there is also a glossary of terms and a religious calendar to help readers. Also, there is an essay in the back about how Ms. Moran used historical facts, but when needed she bridged those facts with some creative writing. For those who enjoyed Nefertiti they will enjoy the Heretic Queen because it has the same blend of interesting characters, back stabbing plots and great historical detail. I look forward to Cleopatra's Daughter!
Trustpilot
Copyright © 2022 Thriftbooks.com Terms of Use | Privacy Policy | Do Not Sell My Personal Information | Accessibility Statement
ThriftBooks® and the ThriftBooks® logo are registered trademarks of Thrift Books Global, LLC