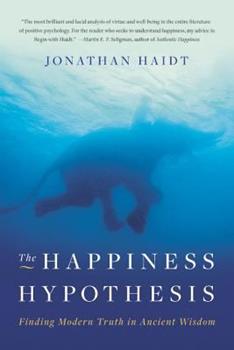 "The most brilliant and lucid analysis of virtue and well-being in the entire literature of positive psychology. For the reader who seeks to understand happiness, my advice is: Begin with Haidt." --Martin E.P. Seligman, University of Pennsylvania and author of Authentic Happiness The Happiness Hypothesis is a book about ten Great Ideas. Each chapter is an attempt to savor one idea that has been discovered by several of the world's civilizations--to...

Happy I Read It

Published by Thriftbooks.com User , 15 years ago
Well, this is a darn challenging book. The Happiness Hypothesis by Jonathan Haidt takes a look at the "modern truth in ancient wisdom." How to be happy? Dr. Haidt looks at the world's major spiritual beliefs, and distills their messages down to what they all agree on. It's enlightening and informative. And how you know he's a college professor is this: H = S + C + V. H is, of course, for Happiness. S represents our biological "set point". If your mama was a grouch, you may have inherited her grouchiness. However, if your mother was more like Doris Day, you may have inherited a higher set point. You may innately see the glass as half full. C represents the conditions of your life. Things like the quality of your daily commute, the noise or peace you encounter, your level of control in life, your feelings of shame or competency, and the nature of your key relationships. Address any problems in C and you will dramatically raise your H. Finally, we come to V. V is for your voluntary activities -- the things you don't have to do but choose to do. Things like meditation, prayer, exercise, yoga, volunteering. Dr. Haidt's research shows that there is a strong link between altrusim and happiness. Intriguingly, adults who volunteer get more satisfaction from that act than do teens. And seniors? They get the most benefit from "giving back" than any other group. Studies have shown that people who volunteer of their time and talents actually live longer than those who don't. If your S is generally pessimistic, you can try to increase H by consciously trying to be more optimistic, but the real H payoff comes from making even small changes in C and V, according to Dr. Haidt (and your friendly neighborhood life coach). I was particularly drawn to the last part of Dr. Haidt's book -- where he discusses the differences between the ethics of liberals and conservatives. I won't give away the ending -- suffice it to say, I now have a different construct in which to view the endless debates between the "left" and the "right".

Published by Thriftbooks.com User , 16 years ago
Bits of wisdom fly at us constantly from fortune cookies and the like. Perhaps because of this, you may only rarely stop to savor a great idea and make it your own. Author Jonathan Haidt provides a remedy to modern habits of superficial thinking with this accessible update on 10 great ancient philosophical themes, examined within a scientific framework of positive psychology. He demonstrates that the questions of the ages are still worth kicking around. We recommend this book to those who want to know why change is so difficult and happiness so elusive. It will give you plenty to think about and possibly change your life. At the least, it will point you in a positive direction.

Terrific! Likely to Be in My Top Ten Books of the Year: An Outstanding Contribution

Published by Thriftbooks.com User , 16 years ago
This is a remarkable book, that gives the lie to the old statement that people who have something to say can't normally express themselves, but those who are good at expressing themselves don't normally have much to say! Using delightful sparkling prose, Jonathan Haidt has written a meaty and worthwhile book about happiness, emotion and the creation of personal meaning. It is so rare nowadays to find people who can place their work in a broad historical and cultural context. Yet Haidt does just that. Here we have a book in which discussions of the brain rub shoulders with the sayings of the Buddha. I am sure that nobody is going to agree with everything that he says. But neither would he want us to: he is informing and provoking discussion and understanding. I worry a little about the scientists and writers who try to reduce complex behaviors to neurons and hormones alone, and Jonathan avoids that trap. This is an insightful book that belongs on the shelf of anyone interested in some of the fundamental problems of living a happy, fulfilled life, and of making a positive contribution to the world. Very highly recommended.

Published by Thriftbooks.com User , 16 years ago
So many people with brilliant insight can't let go of "school writing" to produce a book that reads like a book instead of a paper. Jonathan isn't one of them. His breadth of knowledge spans literature, philosophy, history, religion, psychology -- and he alludes to thousands of sources -- and it all just flows together as if he sat down to have a chat with you about his ten great ideas. I already feel that reading this book has changed my life. In some ways it confirms what I've always suspected (e.g., Buddha's special circumstances for developing Buddhism) and in many other ways it is opening me to new ways of thinking about love, work, life and the pursuit of happiness.

One of the BEST BOOKS I've read in the past year

Published by Thriftbooks.com User , 17 years ago
This book is absolutely incredible - so much fascinating information, and so readable!! First of all, the main hypothesis, that people make decisions with their gut and then use their brains to rationalize those decisions, is well supported. The examples are clear, real, and alive. You'll walk away from the book thinking, there are so many things that I do that I'm completely unaware of. Secondly, my favorite thing about this book was that it was SO READABLE: it sounds like Jon Haidt is sitting across from you and speaking to you. (For example, you may have heard of the one and two marshmallow studies, but the story-like way that Haidt describes it will really capture your attention). Even the headings and section titles kept my curiosity up: what could that next section be about? Third, the section on why human beings are hypocrites (ch. 4) is extremely interesting. Finally, there is so much philosophy and history of psychology interwoven into the hypothesis of the book that you feel like you keep entering a new theatrical stage: one stage after the other, going to the center of a performance. And the best thing is, all the history, etc. is presented as "here is this story that shows why this happens" and "here's this other story."
Trustpilot
Copyright © 2022 Thriftbooks.com Terms of Use | Privacy Policy | Do Not Sell My Personal Information | Cookie Preferences | Accessibility Statement
ThriftBooks® and the ThriftBooks® logo are registered trademarks of Thrift Books Global, LLC