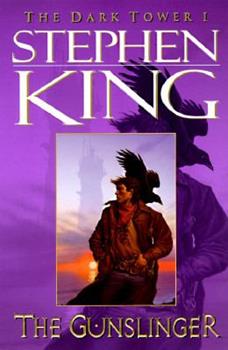 The Gunslinger (The Dark Tower, Book 1)

(Book #1 in the The Dark Tower Series)

Eerie, dreamlike, set in a world that is weirdly related to our own, The Gunslinger introduces Roland Deschain of Gilead, of In-World that was, as he pursues his enigmatic antagonist to the mountains that separate the desert from the Western Sea. Roland is a solitary figure, perhaps accursed, who with a strange singlemindedness traverses an exhausted, almost timeless landscape. The people he encounters are left behind, or worse-left dead. At a way...

Travel to the dark tower... and prepare yourself for adventure!

Published by Horror crazy , 10 months ago
I’ve read the first four books in the Dark Tower series, which disappoints me because these four books were amazing! I want more! The Gunslinger, the first volume in this series, was the least spectacular to me, but it was a good book! The thing I liked most about it was simply getting to know the series’ hero, Roland, the Last Gunslinger. I would still recommend this book to readers because it was enjoyable. The world Stephen King draws you into is bleak, but imaginative. Learning about Roland’s past presents an intriguing character study, allowing us the chance to get the protagonist, a man we already know we will like, because, despite his tough exterior, he’s essentially a really nice guy at heart. Thanks to his first chance encounter with a boy who will eventually become one of his allies, I didn’t like the ending because of what happens to Jake, the boy. So, like I said, I wasn’t that impressed with the first book in this series, but that’s okay because the series improves with future entries. The second book, for example, does a satisfactory job of resolving Jake’s fate in this book. I will not explain, for I do not want to spoil anything that happens in this book, or in the ones that follow. But I agree with all who call this book a good introduction to the series!

Published by xwonkaxstarx , 11 months ago
Great build up story. Can be slow at times but builds us to help understanding of the future novels in this series. Good read!

If you're a fan of this series.

Published by Meghan , 1 year ago
I am a huge King fan and I found this pretty interesting. It was not the best out of the series, but an interesting start.

Incredible story of good versus evil

Published by ryvaut , 1 year ago
I love Stephen King and this is probably his favorite series. The Gunslinger is locked in a never ending battle with the Man in Black. The Gunslinger must keep the Man in Black from toppling the Dark Tower which is the secret key that holds the universe together. These two collide in the ultimate battle between good and evil. The movie fails to capture the scale of this masterpiece.

One of my favorites of all time!

Published by Thriftbooks.com User , 2 years ago
Seriously incredible story, character development, and writing style. Do yourself a favor, read it!

"Ending is just another word for goodbye."

Published by Thriftbooks.com User , 16 years ago
I closed the book after turning the last page, and sat for a time, thinking. How can I possibly sum up what I was feeling at that moment? I've been reading about Roland and his companions for about 16 years -- just over half my life, do ye ken it -- and now it's finally done. King reached the ending to his long tale, and I came along for the ride with him, all the way to the very end. Though some moments were wondrous, some terrifying, and some sad beyond words, I saw it through. Because King saw it through. Because Roland saw it through. I owed them this much, after all they've given me. Having finished, I know I owe them more than that. This final volume, over 800 pages long, did not want me to put it down once I had opened it. Quite simply, it never lets up. Soon after beginning it, I found myself spending every spare moment reading it. Racing through it. Devouring it. I was compelled, by the power of the tale King was spinning and by the palpable presence of the Tower itself to reach the end of this long quest. Is it good? Oh my, Constant Reader... it is much more than that. "The Dark Tower" is a fitting conclusion to all that came before, and that is saying a great deal. In this book there are wonders to behold and terrors to chill the blood. Surprises abound within these pages, both good and ill. There is little here that is predictable, but there is much to satisfy. This is a book with much meat on its bones, and this reader will likely be digesting the rich banquet of the Gunslinger's tale for quite some time. In this book, Stephen King presents us with the final course in a meal for the imagination, and it is one which I will not forget. This is a tale which will remain with the reader long after the final page is turned. I will not give any of its substance away here, I will leave that for sai King to do in his own way, that the reader may enjoy it all the more. The ending, which I have been anticipating and dreading with equal fervor, comes with a touch of sadness, because as sai King himself has pointed out, endings are heartless. "An ending is a closed door no man can open," and having walked through that door, I find it difficult to look back without sadness. King has brought this story and these characters to life for me, and frankly it breaks my heart to have reached this ending. I knew it had to come, and I would be drawn to it as Roland was drawn to the Tower, but having reached it my heart is shrouded. "Ending is just another word for goodbye," and now it is time to say goodbye to this story, to these people who give it life. And to give my thanks for their story, which I have treasured unlike any other. Thankee-sai to Oy, of Mid-World. Thankee-sai to Jake, Gunslinger of New York. Thankee-sai to Eddie, Gunslinger of New York. Thankee-sai to Susannah, Gunslinger of New York. Thankee-sai to Roland, Gunslinger of Gilead. And most especially... thankee-sai to Stephen King, Wordslinger of Maine. We were well-met on this path

It's not just a guy thing

Published by Thriftbooks.com User , 17 years ago
I've just completed the first in The Dark Tower Series, and I have to say, I think, this is one of King's best told stories yet. I was a little disappointed to see one review suggesting that this book is "a guy thing"; so, ladies especially, I wanted you to know (coming from a woman, mother, wife, etc. and long-time King fan) that this book has a little bit of everything told in a parallel world that will keep you turning the pages, in true Stephen King style. Roland, the last Gunslinger, is a likeable, and realistic character who shares a wide range of feelings and reflections that will make you love and hate him. His dealings with his women, his mentors, and his too brief travel mate, Jake, make him a rugged, yet soft-hearted hero, one that I will not too soon forget. The book is hard to put down, and will make you long for the next pages in the saga, even before you've finished.

Published by Thriftbooks.com User , 21 years ago
At under 300 pages, "The Gunslinger" - the first book from Stephen King's "The Dark Tower" series - may seem oddly short, especially when compared to the latest volume from the epic, weighing in at around 700 pages. And still, Constant Reader, there are thousands more to go!According to the afterword from this book, it took King twelve years to complete the writings. He wrote the opening line, "The Man in Black fled across the desert, and the Gunslinger followed" while an undergraduate, the middle portions when "`Salem's Lot" was going bad, and was inspired with another concurrent writing: "The Stand." For King to have kept the Gunslinger, the Man in Black, Jake, and the other characters - and really the entire world of the Dark Tower - alive for so long in his mind is a testament to not only the power that this held over the author, but holds over us - his Constant Readers. Moreover, since the first publishing of "The Gunslinger," around twenty years have passed, a number of newer volumes in this series have come and gone - yet with this first, partially inspired by Robert Browning's poem, "Childe Roland," and partially inspired by reams of green paper (read the afterword to the book), you know that this was a very special creation indeed.I am not a fan of King's horror fiction. But when he gets down to writing about "other worlds than these," such as "The Stand," "Insomnia," "The Green Mile," and "The Talisman" (co-authored with Peter Straub) - there is no one better. His is an imagination to be jealous of. There is always a feeling that alternate universes exist, next to our own. King imbues his other worlds with just enough of our own so that we feel a tantalizing connection between our own perceptions of reality, and those that King entertains us (Constant Readers) with. At any rate, "The Gunslinger," at under 300 pages, is just right to introduce us to the world of The Dark Tower, and keep us on course, with a desire to continue (and to wait, ever so patiently for the next volume in the series) the journey the Gunslinger started many years ago.

A story of Roland of Giliad; A story of all mankind.

Published by Thriftbooks.com User , 21 years ago
King takes his reader on a journey to the dark tower. This book is the perfect introduction. This book is not only about a journey of Roland of Giliad, but a book that takes its readers on a journey. From page one, It is me who is on the journey, hopeing to find why my world is falling apart. Roland is the character of mankind. King does a great job of making that character come to life and envelope all of us. This book relates a story that is ages old. Ever since humans have been seeking, they have lived this story. I would recomend this book to anyone who searchs for meaning and purpose in their own lives. It is more than a book. It will take hold of you, so be careful.

The Gunslinger Mentions in Our Blog