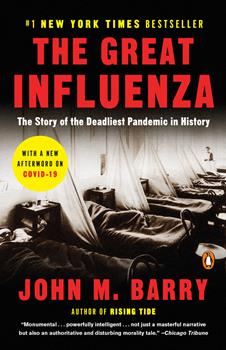 The Great Influenza: The Story of the Deadliest Pandemic in History

#1 New York Times bestseller "Barry will teach you almost everything you need to know about one of the deadliest outbreaks in human history."--Bill Gates, GatesNotes.com Monumental... an authoritative and disturbing morality tale.--Chicago Tribune The strongest weapon against pandemic is the truth. Read why in the definitive account of the 1918 Flu Epidemic. Magisterial in its breadth of perspective and depth of research, The Great Influenza provides...

Published by MichaelSTL0129 , 1 month ago
I bought this book in paper back like new condition and it is not what was suspected. The binding is loose, there is markings all over the pages and it is water warped. It is readable but definitely not something I will keep on my shelf after reading. Unhappy.

Published by Thriftbooks.com User , 16 years ago
I bought this after seeing a recent television show which focused on the avian flu and the possibility of another flu epidemic. I was convinced that we're due (maybe way OVERDUE)for one soon, whether it is the particular avian flu that has people so alarmed now - or another strain we can't even imagined. Bottom line - at some point, odds are high that a virus will be transmitted from human to human, after going from bird to human first...and that the consequences will be catastrophic - IF we don't start making some changes now. And IF the people on that show were right about the effects of the flu, Baby Boomers owe it to their children to learn about the flu because, ironically, it tends to hit those between the ages of 20-40 the hardest, NOT those who are very young or those in their 50s. Oh, yeah, it also (according to some experts) killed 55% of ALL pregnant women who got the flu (has to do with vagaries of the immune system during pregnancy that put these women at special risk). Even if you aren't into dark speculations or "What ifs", you're likely to find this book fascinating, mainly because the author put such time, effort and research into producing a recreation of the history of one of the truly seminal events in human history. The result? A riveting portrait of a time when people were literally dying by the thousands, when trenches had to be dug to bury all the dead (no time to make enough coffins or bury the dead in a timely, honorable manner). In short, things got very, very grim. Reading about how people dealt with the epidemic couldn't help but get me to think about how we'd deal with now, especially in a world that has a global economy of massive proportions. I think the results would be far more devastating than they were then, especially since so many of our products come from overseas, including much of our medications. What happens to those products when and if borders are closed? Whether you simply want to read about history or you want to use this as a jumping off point for thinking about the future, The Great Influenza deserves top billing on your "to do" list. Admittedly, there are some flaws in this book and the author does tend towards the overly dramatic at times but the strengths of this book far overcame those and I couldn't bring myself to give it less than a "5" because I think it is a book that should be read by as many people as possible right now. Some chapters stand on their own, so if you are the type of reader who likes to "browse" through sections of books, you could actually do that with parts of this book (especially the parts which focus on good science and bad science). But I'd recommend you start on page one and read it straight through in order to get a better perspective.

In The Great Influenza, history is anything but dry

Published by Thriftbooks.com User , 16 years ago
I found John M. Barry's book on the 1918 influenza pandemic riveting. I am a certified nurse-midwife, and I found the discussion of the scientists involved in the search for a cure especially fascinating. He brought these men and women alive for me. I could almost feel the pressure they must have felt to find some way to stop the mass dying. His coverage of the government's (Woodrow Wilson, to be specific) mishandling of the crisis shocked me - it forever changed my concept of Woodrow Wilson as a man and as a president. I am a real history lover, and I would recommend this book to anyone interested in the time-period, the subject matter or medical science in the early 20th century. It was excellent.

The Great Influenza: The American Experience

Published by Thriftbooks.com User , 18 years ago
In The Great Influenza, John Barry has produced a massive and exhaustively researched description of one of the greatest disasters of human history. At least, from the American point of view. While there are a few glancing references to what was going on in the rest of the world, there is no serious discussion of any attempts to deal with the pandemic in other countries, even in other industrialized countries. On the other hand, Barry has chosen a very specific point of view: the transition of American medicine and medical training from folk wisdom to science. It's a compelling point on which to balance a long and exhaustive (there's that word again) study of how America and, specifically, American medicine confronted an epidemic in which people were dying faster than the technology of the time could handle, an epidemic in which society itself was nearly overwhelmed by death.As other reviewers have noted, the book's weakness is a tendency towards melodrama, as in the far-too-often repeated tag line "This was influenza. Only influenza." After a while, you think to yourself, "Yes, we get it. Give it a rest."On the other hand, the book has one of those quirky displays of real brilliance in the last two chapters in which Barry deals with how science is done well (in the case of Oswald Avery) or done poorly (in the case of Paul A. Lewis). These two chapters are so strong that they could stand on their own, and what they have to say about the process of scientific thought itself is fascinating. Avery's story is that of a man who was just relentessly focused, who kept digging deeper and deeper into a single issue until he discovered the source of heredity itself. Lewis's story, on the other hand, is that of a man who simply lost his way. Distracted by the need to administer an institute, the need constantly to raise money, to deal with the politics of science, the need to socialize and just plain hustle to support the work of others, Lewis lost the focus that Avery had and ending up flailing in a sea of theories and methodologies. In fact, if you don't read any other part of this book, read these two chapters.There is no question about The Great Influenza being a monumental work. It's so good that you just have to overlook the bits of melodrama that pop up from time to time. The research is, well I obviously can't use "exhaustive" again, so let's say nearly encyclodedic. In fact, there's so much research, and so much documentation that Barry has used an odd method of footnoting. Instead of using footnote numbers that refer to the notes section at the end of the book, you have to turn to the notes section and find the specific page and text being referenced. Unfortunately, as a result you don't know while you're reading which bits have footnotes and which don't. I'd prefer actual footnote numbers. Ah, well. I'm sure it seemed like a good idea at the time.In any case, Barry has produced a massive and important work of epidemiological history which is, at

The Time of Death -- a timely and chilling reminder...

Published by Thriftbooks.com User , 18 years ago
A startling fact about a plague that devastated humanity --one which occurred within the lifespan of many still alive today-- is the collective amnesia that so often surrounds that event. Few Americans realize that it's probable that they have a family member only a generation or two ago who fell prey to the deadly Spanish Flu pandemic; tales of when the cry "bring out your dead!" echoed along American streets were seldom passed from those who witnessed it to those of us who descended from the survivors. It takes a trip to virtually any cemetery to bring the death toll home to us, as marker after marker identifies the victims of the 1918 flu pandemic.With THE GREAT INFLUENZA, author John Berry provides illumination on what is perhaps the most horrific epidemilogical holocaust in human history-- the deaths in 1918-1919 of at least 40 million humans, and very likely as many as 100 million, within a timespan measured in months.Chillingly, Barry's examination of the Spanish Flu worldwide epidemic is timely indeed. As I write this, an avian influenza virus not unlike that which triggered the 1918 pandemic, if forcing the mass slaughter of chickens and other birds throughout Asia. It is an attempt to forestall the very real possibility that the virus (which already has infected human victims through bird-to-human transmission, and currently has a 70 percent mortality rate among human victims) could acquire genes which would allow for human-to-human transmission. During research for my own novel, FINAL EPIDEMIC, I interviewed dozens of medical researchers and epidemeologists. Without exception, each stated that their greatest fear was a resurgence of a influenza virus similar to the 1918 variant, which through incubation in humans mutated into a unprecedented killer of humanity. Based on the cyclic nature of flu pandemics, I was told, mankind was already overdue-- and, worse: woefully unprepared-- for such an emerging viral Shiva.Barry's research is intense and impressively documented; he cites in detail the historical record so painstakingly compiled by such fellow medical historians as Alfred W. Crosby, author of the definitive AMERICA'S FORGOTTEN PANDEMIC: THE INFLUENZA OF 1918, and draws compellingly upon the news accounts and diaries written during as the lethal pandemic raged worldwide. His detailed account of the individuals who revolutionized medicine in the U.S. --in the process, fortitiously preparing medical science for the coming conflict with influenza-- provides a valuable perspective on the portrait Barry paints.Barry writes in a style that is gripping yet avoids the tone of sensationalim he could so easily have fallen into, given the terrifying nature of his subject. Influenza was, and remains, a universal threat: As A.W. Crosby wrote in his own classic examination of the 1918 Spanish Flu, "I know how not to get AIDS. I don't know how not to get the flu." THE GREAT INFLUENZA deserves to be ranked among the best medical-oriented histori
Trustpilot
Copyright © 2022 Thriftbooks.com Terms of Use | Privacy Policy | Do Not Sell or Share My Personal Information | Accessibility Statement
ThriftBooks® and the ThriftBooks® logo are registered trademarks of Thrift Books Global, LLC