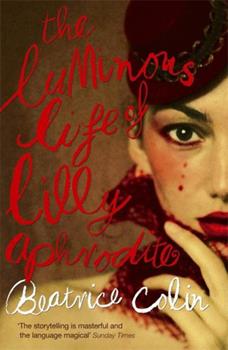 The Luminous Life of Lilly Aphrodite

This description may be from another edition of this product. A celebration of cabaret in Berlin and the birth of cinema, set against the rise and fall of Germany between World War I and World War II As the clock chimed the turn of the twentieth century, Lilly...

Published by Thriftbooks.com User , 12 years ago
I bought this one on a whim and was hooked from the first page, shutting out everyone and everything until I could finish this book. A mesmerizing story of pre-War Berlin and the magic behind the early German movie industry, this book highlights the plighta of the average citizen during the time, including economic crisis, poverty, inflation, disease, and strife. Lilly is the most amazing character and the book is so riddled with heartache and wonder that it is almost unbelievable. I can't recommend this book highly enough - it's the kind of book you wish you could go back and un-read just so you could read it again.

Published by Thriftbooks.com User , 13 years ago
The Glimmer Palace is historical fiction at it's best. It is a tale rich with imagery that take you to this time period and city. Lilly is an amazingly complex character who shows the tenacity and smarts to get her through the terrible hardships she endures. Some of the scenes are so heartbreaking you can feel her pain. We follow her life starting at the bottom trying to survive in an orphanage, to starvation during the depression, and then to her success as an actress. The author, Beatrice Colin did her research. It was so interesting to learn about the history of the silent films era. Her attention to detail shines. If you enjoy historical fiction then I recommend putting this book high on your list.

Published by Thriftbooks.com User , 13 years ago
The Glimmer Palace is one of those rare, immersive novels that fully transports the reader into a place and time far removed from this modern twenty-first century. Beatrice Colin's book took me back to Berlin at the beginning of the twentieth century, when that legendary city was blossoming and its film stars and cabaret performers were the most sought-after flowers of the entertainment world. At the dawn of this new world is born Lilly Nelly Aphrodite, the illegitimate daughter of a cabaret performer. Within a few months the little girl is orphaned, and she begins a life of restless transition and searching. Never sure of her identity, Lilly constantly reinvents herself as she seeks her place in the world: orphan, maid, poet's muse, bride, widow, barmaid, typist, and star of German film. Lilly's growth and happiness are implicitly tied to the city she calls home: as Berlin's star rises and falls, so does she. Colin brings drama and bubbling, breathing life to every page. Lilly's flashing, lovely eyes are witness to some of the greatest changes the world has ever seen. She proves herself to be as delicate as a hothouse flower and tenacious as a weed as she survives a childhood in an orphanage and slow starvation in post-WWI Germany, yet rising to live the life of a glamorous film star in Berlin and Hollywood. Throughout it all I rooted for her. I wanted her to win. It is clear early on that she becomes a huge star (references are made to interviews conducted after she's "made it") but when she's fighting in the streets for horsemeat I was just dying to know HOW she was going to get through. Knowing that Lilly would be OK did absolutely nothing to dispense the tension and suspense. I just could not put this book down. As Arthur Golden's Memoirs of a Geisha brought Japan's floating world to life, The Glimmer Palace brings the mysterious world of Berlin and cabaret back from the hazy past like a shimmering dream.

Published by Thriftbooks.com User , 18 years ago
Friends raved about it. But I must admit, I was a bit skeptical when I first picked up this book. What could circuses and alchemy have to do with each other?- let alone a story of a woman disabled by a circus accident. Two pages in however ...Wow! The wild storyline took off and I had to leave my prejudices far behind. What really makes this novel so original and comical is its colorful array of characters. There is Constantine - the alchemist, perpetually failing in his attempts to capture the elixir of life; Clara Valentine - the shop-a-holic wife of the circus master now fallen from the grace of the high wire and spending her former glories; Julie the brow beaten social worker who takes her charges to shopping malls for self esteem building sessions - a wonderful array of tragic-comic incidental characters who will ensure , when you come across them, that you put the book down just to laugh for five minutes. But most of all there is Little Wing, the story's protagonist.Wing - who lost the use of her legs and now discovers the secret of her conception and abandonment , while awaiting the verdict on her social housing - who fights her social worker with an almost Rabelaisian wit. She is a modern-day Quixote beset by the banality of the modern age. Her ironic stance against her fate reveals a deep streak of melancholy beneath the antic humor.If I said that it was the characters that make this story I'm probably wrong. There are some big themes running through this deceptively playful novel, which I won't even try to summarize for fear of looking silly. What is for sure though is that the story carries its uplifting message as much through the sheer vitality of the writing as through the manic inventiveness of the storytelling. A freakishly wonderful novel.

Published by Thriftbooks.com User , 18 years ago
A cast of eccentrics, dual plots that suspend belief, and comic touches that made me laugh out loud. Disappearing Act drew me in to a weird and wonderful world of romance, realism, mystery and science, all the way to its poignant end. A fun, fast, and interesting read.
Copyright © 2020 Thriftbooks.com Terms of Use | Privacy Policy | Do Not Sell My Personal Information | Accessibility Statement
ThriftBooks® and the ThriftBooks® logo are registered trademarks of Thrift Books Global, LLC