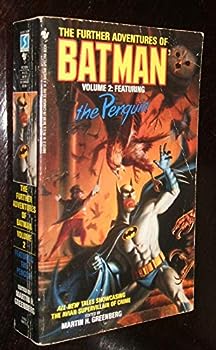 The Further Adventures of Batman, Vol 2, Featuring the Penguin

(Book #2 in the The Further Adventures of Batman Series)

This description may be from another edition of this product. Great adventures for batman lovers and you will enjoy this a lot. we ship daily.

The best statistically of the series

Published by Thriftbooks.com User , 11 years ago
THE FURTHER ADVENTURES OF BATMAN VOLUME 2: THE PENGUIN Eleven short stories, nine of which feature that Black Bird of Banditry the Penguin. The Penguin---along with the Riddler---due to the intelligence and care the characters require---have usually flumoxed post Golden and Silver age writers. The Penguin is a very well defined character who operates in very specific ways and consequently he has resisted all attempts to dumb him down into either yet another of the inmates of Arkham asylum crowd, a mere gangster or whatever the hell Tim Burton thought he was doing in BATMAN RETURNS. A writer either meets the challenge of the Penguin......or lays an egg. Two writers here actually chicken out. SEIZE THE NIGHT by Will Murray about criminal doings down Mexico way and FAT TUESDAY by Nancy Collins about crime down in New Orleans--while both quite good---do not feature the Penguin at all. Meanwhile foul rotten eggs are delivered by Steve Rasnic Tem---who has produced perhaps the silliest and most wrongheaded Penguin story ever written---and Brian Thomsen. That said the collection does feature several extremely good stories that are either nearly or complete successes. ROBBER'S ROOST by Max Allan Collins. Collins--who has written for the character before and demonstrates a genuine affection for him--produces a pleasing story of a newly released from prison Penguin attempting to committ some villainy under the watchful gaze of Batman but when the Caped Crusader discovers what the crime is, it becomes a question not of can he stop it but will he want to? HIDE AND SEEK by Kristine Kathryn Rusch. A touching disturbing story involving abused children being kidnapped by the Penguin. Extremely good and an example of the type of story that only the Penguin could have been featured in. It would not have worked with any other of Batman's rogue's gallery. THOSE WERE THE DAYS by Jerry Novick. Someone is committing a series of horrific murders that seem to implicate the Penguin. The motives lie deep in the feathered fiend's past. Can Batman solve these crimes before they attract the attention of the master villain himself? Actually no. He cannot. ENDANGERED SPECIES by Greg Cox. Except for a whopper of mischaracterization of the author's part---who obviously did not do his research---regarding the character, this is still an exciting story as the Penguin steals and holds two rare birds for ransom...or else. GOING STRAIGHT by Laurie Septon and Charles Von Rospach. Another misguided attempt to portray the character as being mentally deranged but still a fun story as Oswald C. Cobblepot alias the Penguin does indeed go straight but happily he gets better. BROTHERS IN CRIME by William F. Nolan. A very well written story with superb handling of the character by the author as the Penguin breaks out of jail with the help of his heretofore unsupected younger brother. The only qualm here is that the story is way t
Copyright © 2020 Thriftbooks.com Terms of Use | Privacy Policy | Do Not Sell My Personal Information | Accessibility Statement
ThriftBooks® and the ThriftBooks® logo are registered trademarks of Thrift Books Global, LLC