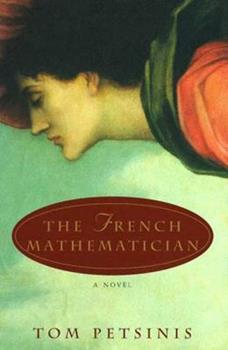 The French Mathematician is a fictional memoir of Evariste Galois, the mathematical genius who made innovations in algebra before his untimely death in 1832. Galois narrates the book, describing how... This description may be from another edition of this product.

Beautifully Written Novel of a Grand and Tragic Life

Published by Thriftbooks.com User , 20 years ago
I have been interested in the life of Evariste Galois for some years now so I was delighted to find this book. Galois was a brilliant French mathematician, who may or may not have suffered from some form of epilepsy or depression and who, sadly, was killed under mysterious circumstances at the young age of twenty.Galois' life is cloaked in mystery. We do know that he dreamed of solving the quintic, a complex mathematical equation that had eluded all the best minds of his time. He was the first person to formulate the concept of a finite group theory and then to apply this theory to solve one of the major mathematical problems of his era.Although Galois seemed to live for pure mathematics and pure mathematics alone, he mysteriously gave up his feverish study to devote most of his time to the revolution that took place in France in 1830. Why Galois, who seemingly had little interest in politics, would brandish a knife and threaten the king, in front of Alexandre Dumas, no less, forms the basis for much of this book.In this book, we learn of a most important letter Galois wrote on the night of May 29, 1832 to his friend, Auguste Chevalier. What we don't learn about, and what has been lost to history, are Galois' other manuscripts and, most interestingly, his brief love affair with Stéphanie du Motel. We also know that Galois fully expected to die when he did, but what we don't know is why he died or why, precisely, he expected his death to come about exactly as it did.You certainly don't have to be a mathematician to love this book. You really don't even need much of an interest in math. Galois is such a compelling character that he makes a wonderful character study no matter what he was interested in. This book, aimed at the general reader, does not dwell unnecessarily on mathematical concepts and even when it does, it does so in such a way that it only adds beauty to the narrative and depth to the character of Galois.Petsinis seems much more interested in capturing the psychological essence of Galois than in cataloging his mathematical and political conquests and, in my opinion, he succeeds wonderfully. This is a beautiful book and one that is a joy to read. Petsinis worked a seeming miracle in weaving the actual events in the life of Galois into his fictional narrative. We are left with nothing but the belief that Petsinis' Galois is the real Galois; that these were his thoughts and his feelings and his reasons for being.Galois struggled with his emotions for most of his twenty years and Petsinis lets us feel this struggle. For example, Galois, even though being mesmerized by the enchanting du Motel, had an intrinsic aversion to both sex and romance. He was a genius par excellence, yet he was a dreamer as well, and sometimes this dreaminess would cause him to slip from the factual world of the mathematics he loved into a horrific fantasy world of which he wanted no part.The life of Evariste Galois makes for a very difficult characte

A wonderfully written novel, you don't have to like math!

Published by Thriftbooks.com User , 22 years ago
I would highly recommend "The French Mathematician" to fans of math, french history and even those who could care less about math. This book follows Galois' discovery of his talents in mathematics and the conflicts in France that make him decide if he will follow his genius and study math, or join the revoultion for democracy in France. This book is well written and is full of wonderful imagery that puts you right in revolutionary France. I would guess that most people could understand the passion for democracy that the characters in the book have, but this book also helps you understand Galois' passion for mathematics.
Trustpilot
Copyright © 2022 Thriftbooks.com Terms of Use | Privacy Policy | Do Not Sell My Personal Information | Accessibility Statement
ThriftBooks® and the ThriftBooks® logo are registered trademarks of Thrift Books Global, LLC