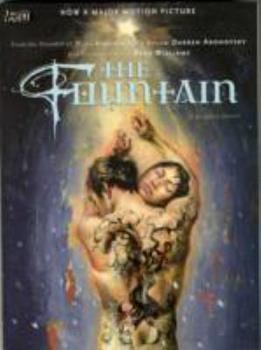 Written by Darren Aronofsky Adapted by Kent Williams Art and cover by Williams This fall, Darren Aronofsky - the acclaimed director behind such critically acclaimed films as Pi and Requiem for a Dream - releases The Fountain, his most ambitious movie yet. Now, in time for the film's greatly anticipated debut, is the softcover edition of last year's sought-after THE FOUNTAIN graphic novel, which earned artist Kent Williams (Blood: A Tale, Havok/Wolverine:...

Awesome supplement to the movie.

Published by Thriftbooks.com User , 13 years ago
I watched the movie about 8 months ago and by the end of it I had no idea what happened. I gave it another couple months and I watched it again. It all clicked! The movie definitely ranks on my top ten movie list for its genre. What an awesome surprise it was that it was a graphic novel. After reading through it, it makes a lot of the movie make more sense. A must read if you like the movie.

Published by Thriftbooks.com User , 14 years ago
Before buying this, I took the risk of finding out whether I would receive the photo book or the actual graphic novel. It turns out, thank God, that I received the graphic novel. (For those who are interested, it is pretty much perfect and just as intriguing and multi faceted as the movie.) I just wanted to point something out. Some reviews have said that when they bought this item, they received the coffee table photography book (which I plan on buying due to the overwhelmingly good reviews). Be careful when buying this. Make sure this is the cover you see in the cart and not the one of the photography book. As for a formal review of the graphic novel itself, that will come this weekend when I read it over for the second time. I hope this was a little useful to all future buyers.

Published by Thriftbooks.com User , 15 years ago
Truly an awesome story and quite simply amazing artwork. I am very happy to have bought it. Its philosophical and the author leaves some things up to the reader to interpret. Very nice indeed

Excellent and thoughtful work as expected by Aronofsky

Published by Thriftbooks.com User , 15 years ago
I have to admit that after reading The Fountain I am glad that they cancelled the movie...because now one will be able to enjoy two stories by Darren Aronofsky - first the original script made into a really beautiful and well-told graphic novel and somewhen later another movie about the same subject. But now some more about the comic itself: The story is told in a rather unusual way - with lots of the boxed texts reminding of a movie script. As a frequent reader of comics I had to get used to that first but after a while found that it actually serves the storytelling very well. The story itself is very nice although one very quickly gets what the point is going to be in the end (but since it's a good story well told one anyway wants to continue). The pictures are very good indeed - there is not much else to tell about them except - they are worth indulging in for a good while. All in all a very good book that can only be recomended further to everybody!

Published by Thriftbooks.com User , 15 years ago
I first read through the story, and simply scratched my head and said "Well, that was a good read." There was no more to it than that- I simply enjoyed the time I had just spent with the story, which spans centuries as though they were minutes, and nothing more. I was done with the story. But the story wasn't done with me. The ancient New World. . . the modern day, swathed in blues and oranges and other colors. . . the future, abstract and an amazing sight, with ghosts and dying stars abound; all these images stuck with me, haunting my waking eyes. Kent Williams has painted a dream, and the story sticks with you like a pleasant dream with echoes of pain in it as well. And in many instances, the images are works of art- the splash pages near the end, or the cover art are what proves it for me. As far as the story goes, Aronofsky has written a beautiful and revelatory story about life and love and death itself. Many of these facets are not immediately apparent on the first reading, but with subsequent readings it becomes more and more apparent; there are so many levels working here that it takes time to process them all. While the price of the book may discourage some, and the mere fact that this is a "graphic novel" by definition, if you are considering buying this then please give it a chance. After the first go around, you may not be immediately impressed. But give it a night or two, and I promise you that the story will resonate within you, thus justifying you purchase. Deserves the 5 stars easily.
Copyright © 2020 Thriftbooks.com Terms of Use | Privacy Policy | Do Not Sell My Personal Information | Accessibility Statement
ThriftBooks® and the ThriftBooks® logo are registered trademarks of Thrift Books Global, LLC