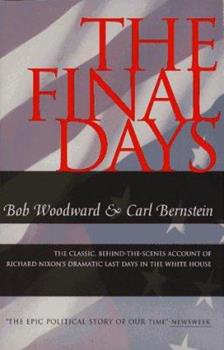 by Bob Woodward and Carl Bernstein

The Washington Post reporters draw on interviews, leaks, and investigations to reconstruct the events and circumstances, in and outside the White House, during the unsettled and unsettling final weeks of the Nixon administration.

The self-destruction of a President

Published by Thriftbooks.com User , 19 years ago
Bob Woodward and Carl Bernstein helped to bring about the fall of the Nixon Administration, so it is only fitting that they were there to chronicle its demise. In 456 fascinating pages, they bring us the blow-by-blow of the downfall of Richard Nixon and the Byzantine regime he created while serving as our 37th president. The first part of the book gives us the background of the Watergate mess and how Nixon dug himself deeper and deeper in, through lies, deception, and more lies to cover up the lies he had already told. We watch almost awestruck as this chief executive shoots off each of his toes in turn, then both feet, then both legs... we want to open up his cranium and peer into the mind of this tortured man and find out what in the world was he thinking of when he actually bugged himself, showing himself in all his ugliness and venality. Did this man even think, or was his denouement a series of blind reactions to events of his own making that did him in? The end of part one brings us to the final lit fuse that will blow the Nixon presidency wide open: the decision of seven Republicans on the House Judiciary Committee that they will vote with the majority Democrats to impeach a Republican president for obstruction of justice.From there, the demise of Nixon was an ordained conclusion, but Woodward and Bernstein follow it to its end in part two, which is a day to day account of the final seventeen days of Nixon's presidency. The House Judiciary Committee votes to bring a recommendation of impeachment to the full House of Representatives, and the Supreme Court rules unanimously that Nixon cannot take shelter behind the specious shield of executive privilege and refuse to release the tapes that document his complicity. Nowhere to run, and nowhere to hide... We watch Nixon's fellow Republicans abandoning him one by one as the evidence of his complicity piles up and he realizes he has no support any more, nothing to fall back on. The excruciating scene of his meeting with Kissinger after he has decided to resign his presidency rather than be ignominiously kicked out is gut-wrenching; we are both fascinated and repelled by Kissinger's evident lack of discretion and sensitivity in telling it afterwards, as he must have done. In the end, we almost feel for this man who has fallen from the highest office in the world into a disgrace which will remain with him for the rest of his life; abandoned by most of his former friends and allies, despised by a wife who hasn't loved him for years, and supported only by the blind devotion of his children... until we read his farewell speech to the nation and shake our heads as we realize that, at the end of his presidency all the way to the end of his life, Nixon simply did not get it.

Essential reading in the history of journalism

Published by Thriftbooks.com User , 19 years ago
"All The President's Men" & "The Final Days" are an essential part of political history: They are also an essential part of journalism history. Watergate & the revealed power of the media to topple a president changed journalism -- and inspired a generation to enter the profession. ... Read "All The President's Men" first ... & , as you read it, know that the better book is still to come. "All ..." is vital to understanding what happened; "Final Days" is a far superior book. ... "All ..." reads as though the authors were still shell-shocked from what had happened & what they -- in their 20s -- had participated in. "Final Days" is a much more mature & calmer book. It offers a better understanding of what Nixon did wrong than the first book. Its portrait of Nixon is far superior ... even empathetic. ... I am a Republican ( & a journalist) & someone who finds much to redeem Nixon ... & I thoroughly enjoyed this book, which is remarkably unbiased & deft at presenting even the least likeable participants as human. I also was jolted at some of Nixon's extremes, which I had prefered to forget because in some ways (i.e. foreign policy) he was a great president. ... Aspects of this story are remarkably dated ... would Nixon have fallen now? (Reagan didn't. Clinton didn't.) Are we as easily shocked? As naive about power? Do we even fantasize anymore that our leaders will be flawless? ... The comparisons with Bill Clinton are striking & obvious. Would Clinton's story have ended differently if he had been president 25 years earlier & before Watergate & Iran-Contra? ... For a real immersion in the story through popular culture, read the two books in order & see the movie of "All The President's Men" & see Sir Anthony Hopkins' brilliant performance in "Nixon." ... "Tragedy" is an abused word, but Nixon's story WAS a classic tragedy: Hero undone by fatal flaw.

Published by Thriftbooks.com User , 19 years ago
Well, Bob Woodward has a bestseller again -- "Bush at War" debuted at #2 on the New York Times bestseller list today. What's Carl Bernstein up to? Never mind about that. "The Final Days" is still not to be missed, over 25 years since it, too, became a best-seller. The country has moved on to other pressing political matters, but interest in the unravelling of the Nixon Administration remains high. Books speculating about the identity of Deep Throat seem to come out annually."The Final Days" is marked departure from "All the President's Men", the first Woodward/Bernstein book and obviously the one that put them on the map. Whereas "President's" was the inside story of two journalists chasing down a story that led higher into the U.S. government than they ever dreamed imaginable, "Final Days" is a step back, since neither Woodward nor Bernstein (nor Deep Throat, for that matter) appear as characters. The focus turns to Nixon's family and close political advisers. Many of the oft-mentioned names remain relevant today: Pat Buchanan, Diane Sawyer, Henry Kissinger. It's also about twice as long as the earlier book, but reads just as quickly."Final Days" is divided into two parts. First is a general overview of the first two years of the Watergate Crisis, this time told from the view of all the President's men rather than from the Washington Post. Next is a dizzying chapter-a-day sequence of the final 17 days of the Nixon administration.In the midst of the research are some surprisingly interesting detours. Nixon's final foreign journey as President is to the Middle East. A funny aside details how the White House press office had to avoid mentioning Israel on the same page of press releases naming other countries in the region, to avoid offending Islamic governments. Also amusing is the lengthy description of Nixon son-in-law David Eisenhower's obsession with fantasy baseball.25 years, numerous Presidential scandals, and a war or two later, the undoing of Richard Nixon remains riveting and required reading. The Woodward/Bernstein books blaze with a you-are-there immediacy, and even the overuse of passive voice doesn't slow down the narrative. Every hour of mind-numbing research underpinning the book has paid off, because the story told is seamless. There's dramatic tension to every decision Nixon makes in his final month in office: to resign or stay in office? To surrender his private tapes, or continue the legal battle? Nixon himself even becomes a sympathetic figure, as the debilitating nature of his phlebitis is explored.Perhaps you're busying reading Woodward's latest effort now. Perhaps you're numbed by his almost annual hardcover tomes about the private lives of American presidents, each less relevant than the last. At any rate, "The Final Days" is a detour well worth your time, whether you're on the left, the right, or above all that. It's surely no coincidence that Barbara Olson's excoriation of the Clinton White House bea

Published by Thriftbooks.com User , 19 years ago
A very good book, for my money it is better then All The President's Men. I could not put it down, it really read fast. It really gives you a view into Nixon under pressure. It has all the detail that you would expect from a Woodward book and also brings out some of the personalities involved. It also gave me a much better understanding of what Nixon actually did in the way of crimes. This book should be on your list if you are a political junkie. To gain a good understanding of the Watergate affair read both All The President's Men and The Final Days together. I highly recommend this pair of books to anyone looking to understand this period of American history.

Published by Thriftbooks.com User , 20 years ago
This is an amazing account of the last few months of the Nixon presidency leading up to his eventual resignation. The first half of the book deals in larger chunks of time, but by the time the second half begins, each chapter encompasses a single day. As in ALL THE PRESIDENT'S MEN by the same authors, the reader may find the onslaught of different names to be intimidating; fortunately, the cast of characters list at the beginning of the book helps a lot. All the people involved are treated with a lot of respect, and their motivations are made very clear throughout with only a few exceptions.Unlike ALL THE PRESIDENT'S MEN, this is not told from the viewpoint of the two authors. Through interviews and other methods, the two journalists have reconstructed what they believe those last few months to have been like. The result is an amazing and richly detailed look at the aftermath of one of the most important scandals in recent US history.One of the real strengths of this book is that it allows the reader to see how the scandal affected many of the different people that were close to the President -- his aides, his family, the lawyers defending him, congressmen, fellow Republican leaders, etc. We see how his team tried (and eventually failed) to fight the accusations made at President and how his staff continued to get the work done even as he retreated farther and farther into himself.Before I read ALL THE PRESIDENT'S MEN and THE FINAL DAYS, I really didn't know too many particulars about the whole Watergate scandal. I highly recommend this pair of books to anyone looking for detailed, yet highly readable sources of information.
Copyright © 2022 Thriftbooks.com Terms of Use | Privacy Policy | Do Not Sell My Personal Information | Accessibility Statement
ThriftBooks® and the ThriftBooks® logo are registered trademarks of Thrift Books Global, LLC