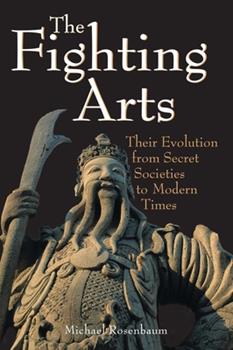 The Fighting Arts: Their Evolution from Secret Societies to Modern Times

A fascinating and informative survey tour

Published by Thriftbooks.com User , 19 years ago
The Fighting Arts: Their Evolution From Secret Societies To Modern Times by Bando, Judo, and Boxing expert Michael Rosenbaum, provides the interested reading with a fascinating and informative survey tour of martial arts from the depths of history down to the modern day. From the ancient cultures that first helped shape these personal combat arts to their assimilation into contemporary Western society, The Fighting Arts covers the changes in the styles, the reasons why the modern military doesn't train in "classical" martial arts, and so much more. The Fighting Arts is a wealth of information and reason, and confidently recommended for anyone looking to learn more about how these martial arts came to be what they are today.

Well worth the read

Published by Thriftbooks.com User , 19 years ago
Rosenbaum's approach is far from a how to or how to do martial arts..Instead he explains in a very easy to understand manner just how the fighting arts evolved due to our cultural moors and traditions, not just Asian but other counties as well. From thisfoundation he then clear points out the differences between oldworld battlefield martial arts and their evolution and our modern quasi martial arts that consist of many things most not of a martial nature. It is well sourced and historically correct. He uses various systems and styles as examples of to explain his points, from Tae Kwon Do to JKD, UFC and others well known today. His views are at times blunt in their ascessments of todays fighting arts especially when compared to those practiced 100-200 years ago. All in all I really enjoyed it, found it refreshing,educational and even at times challenging compared to what I have been led to believe about the marital arts.

Published by Thriftbooks.com User , 19 years ago
First of all, the soul of the author is very much reflected in the forwards in both of his books. Then he gets down to "brass tacks." This book is thought provoking, straight forward, well sourced and well written.I really enjoyed the cultural perspectives and the analysis of both classical and modern systems. It's a must read.

Published by Thriftbooks.com User , 19 years ago
It seems that this book picks up with the same theme as his last:Okinawas Complete Karate System Isshinryu. Except in this book (Fighting Arts) he explores not only the foundations on which Asian fighting arts were laid but European ones as well. He clearly points out that the long held belief of the KNights and Samurai being Honerable and noble men who fought only for good is a big myth. His examination of the modern military and its hand to hand combat systems is very enlightening. The author makes no qualms about stating up front that your Ranger Marine or Paratrooper will shoot first, and go hand to hand only as a last resort. Likewise his examination of the role played by modern day systems points out that much of what we do would have little or no place on the battlefield be it either during pre 20th century times or even todays. His approach is very inclusive covering not only karate, but Judo, Tai Chi, Bando, Silat and the UFC stuff as well. I'd buy the book just for the bibliography alone. It's one that will definately make you stop and think about what your training is for.

One of a kind

Published by Thriftbooks.com User , 19 years ago
First off this is the only martial arts book that I've ever seen that has it's forward written by a pulitzer nominee. The approach the author takes is very unique in that he focuses on the development of the fighting arts from cultural perspectives, religon, ethics,warfare, geography, etc and points out how these played key roles in the development of martial arts both of Asian and European heritage. He breaks the book down into two major areas, classical systems and modern ones and then compares the two. If you think that your a fighter on par with the knights of old or the ancient samurai this book will bust your bubble and fast. Likewise if you think that just because you do karate you hold the same mindset as the military elites, Seals, Green Berets, Rangers you will also be in store for some shocks. The book is well sourced, over 100 footenotes and it covers not only civilian fighting arts but those of our modern day military as well giving insights into the differences between them and how they are used. The chapter on Terrorism and its relationship to martial arts was well put and his view of how the fighting arts fit into todays modern world is one well worth considering. At the price you can't beat it. No matter who you are or what you pracitce this book will stir your thoughts. But beware if you think Hollywood has the greatest martial artists that have ever lived, Bruce Lee included, then this book will be a cold slap in the face for you.
Trustpilot
Copyright © 2022 Thriftbooks.com Terms of Use | Privacy Policy | Do Not Sell My Personal Information | Accessibility Statement
ThriftBooks® and the ThriftBooks® logo are registered trademarks of Thrift Books Global, LLC