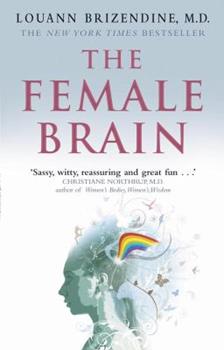 Since Dr. Brizendine wrote The Female Brain ten years ago, the response has been overwhelming. This New York Times bestseller has been translated into more than thirty languages, has sold nearly a... This description may be from another edition of this product.

Published by Thriftbooks.com User , 6 years ago
This is one of the most stunning books I have ever read-a real road map to female thinking and action. Gene Wall

A Gift of Liberation

Published by Thriftbooks.com User , 15 years ago
This book has gotten lots of knocks---some deserved, like her constant use of the unfortunate phrase about the brain being "marinated" in hormones or praising orgasm like a bad Whitman, "O! Climax!". But at its core it is valuable.Its Big Idea: our actions are often dictacted---even compelled---by hormones that get released because of basic human wiring developed over tens of thousands of years. Hard to control teen age daughter? Her brain is flooded with hormones that get released as she bonds with other teen age girls---she gets a high like a drug rush---and when cut off from them by being grounded, she goes into withdrawal and acts sullen and is difficult to control.Can't explain why a female friend goes for the good looking guys and not the nice ones? She is hard wired to pick the handsome man(handsome being a function of symmetry) which her wiring tells her will give her better orgasms and the best orgams are the ones most likely to draw the sperm inside and impregnate her. There is more---discussion of smells in attraction, a possible gene to explain why some males are more faithful than others, how birth actually changes a woman's brain. In short, we are animals. And knowing that is not an excuse for conduct but an explanation for conduct. Sure, some of the ideas are still being developed, some bound for confirmation, others the dust bin. But the book, at its best, is a gift of liberation.

Published by Thriftbooks.com User , 16 years ago
Dr. Brizendine manages to make a book with fifty-eight pages of references a delight to read. This is a book about the female human brain, but it's also a guide to the male brain. I've insisted that my fifteen-year-old son read this book, because it will help him to make sense of the alien mental landscape of his female peers. Lazy reviewers are going to accuse the author of biological reductionism, i.e., of making women slaves to their biology. She explains over and over again that understanding one's neurobiology and hormonal climate allows one to make better-informed choices about life. Some people may not like the way that she tackles the subject of love, but the evidence is clearly on her side. Oxytocin and vasopressin have a whole lot more to do with love than naked winged babies with archery gear. My one criticism of the book lies in the author's clinical focus. She has spent a lot of time dealing with dysfunctional women, and her book sometimes focuses too much on pathology rather than on the broad normal range of experience. Still, it's a solid book.

Published by Thriftbooks.com User , 16 years ago
When I first picked up this book I was a bit put off because there were some comments that weren't particularly complimentary to men that seemed unfair and biased. However, the overall tone of the book was good and I was able to overlook the occasional comment that seemed a bit "off" with respect to holding a balanced position on the genders. Other reviewers have also commented on this from their perspectives, so I won't elaborate any further. You can read these reviews for yourself. This was a difficult book to put down because it used stories to illustrate the different stages of a woman's life and the physical correlations to her behavior. At the same time, it painlessly introduced important information about the brain, hormones and how these are connected to behavioral changes in a woman's life. While this exploration was not comprehensive, it was useful, concise, understandable and well-suited to a non-professional audience. This title also contained a lot of similar information on men and I found this information to be more than a superficial smattering. I wouldn't say the book is titled incorrectly, but don't be misled that it only includes information about the female brain. It contains lots of good content on the male brain as well. The chapters that most grabbed by attention were on the teenage years, developing trust and sexual behavior. These sections brought in a lot of good references from a variety of sources including evolutionary biology, anthropology and neurobiology. Since the author was presenting her own unique perspective as a clinician, she did not bring in a lot of other significant research. This is a legitimate criticism. However, this is a very complex area and I found that the information was an excellent introduction to a vast body of research. For the average layperson, the mixture of science, story and the implications of these facts to everyday life is perfect. For the scientist or other technical audiences, it may not have enough meat from an information standpoint, but the story and interweaving of different threads of research makes the book very engaging for anyone including a professional. By education, I was trained early in my career as a biologist and biochemist. Later, I went on to study psychology. I had difficulty putting the book down and it flowed like a good novel in terms of the writing. The organization of this book was well thought out, particularly the way that different research findings were presented to support the author's argument without interrupting the flow of the story. For many people who haven't read David Buss or anthropology, the insights on short and long term mating strategies will be an eye opener. I also liked the cross cultural references to support her arguments that certain behaviors appear to be due to shared neural architecture rather than cultural influences. There is a lot of controversial content here that is good food for thought. The author tells the sto

Published by Thriftbooks.com User , 16 years ago
I have the sense that Louann Brizendine would perhaps like to have discovered a somewhat different picture of the 'female brain' than the one she reveals in this book. A strong feminist her researches, and above all the cumulative scientific evidence she brings here point to strong differences between the 'female' and the 'male ' brain. The first is, that the female brain is an 'eight- lane superhighway' when it comes to the emotional life, while the 'male brain'is a narrow path in the forest. Women are a lot better at empathizing and understanding others than men are. Men on the other hand are more preoccupied with specific, external tasks. Women care about intimacy.Women think about sex every couple of days or so, and men every hour of the day. Women talk a lot more than men, and receive a great 'high' in doing so. In one of the interviews for the book she explains the basic Learning differences between the sexes. "Girls, develop language skills earlier than boys do; boys develop visual and spatial skills earlier than girls. By 2 1/2, many girls are actively choosing not to play with boys, not for any cultural or sociological reason but because boys have not yet grasped the concept of verbal give-and-take. Boys, with their faster-developing spatial skills, are more likely to gravitate to building blocks and train sets and physical activities that require minimal verbal interaction. " She says that the skills tend to level out in high- school age and strongly recommmends that girls be given at this age intensive scientific training as a way of catching up with what boys have been accumulating previously. Perhaps however the most important aspect of the book relates to Brizendine's work as psychiatrist. Her understanding of the hormonal and physiological forces at play in various stages of the woman's life enable her to find answers in specfic cases which have in the past been overlooked. It is this therapeutic rather than polemical approach to the female brain, and its special qualities which makes this such a highly recommended work.

Published by Thriftbooks.com User , 16 years ago
Many years ago I read a book focusing on the complexity of the human brain - all the chemicals and enzymes involved, and the impact of various shortages or overages. That book convinced me that there are scientific bases for claims that various groups are different; unfortunately, the PC police then took over. "The Female Brain" moves us back towards science-based fact-finding. Brizendine begins by pointing out that while male brains are about 9% larger (even after correcting for body size), they have the same number of cells as female brains. Thus, size is not a meaningful difference between the sexes. However, she also tells us that there is a 2:1 ratio of depression in women vs. men, and that this differential doesn't appear until puberty - thus, chemistry does seem to be an important distinguishing factor. Further, new tools such as PET and fMRI have since documented an astonishing array of differences between men and women. Examples include different brain sensitivities to stress and conflict, use of different brain areas to solve problems and process language, etc. Women have 400% more neurons then men in the brain centers for language and hearing; men have 2.5X brain space devoted to sex, as well as larger centers for action and aggression. As for the claim that women do less well than men in science and men (eg. Larry Summers, at Harvard), Brizendine asserts that the abilities are the same, but that estrogen causes girls to lose interest in pursuits that require more solitary work. Because of their larger communication centers, girls grow up to be more talkative - using an average 20,000 words/day, vs. 7,000 for men. "The Female Brain" examines male-female differences over a human's life-cycle. Menopause brings other changes - less interest in sex, and greater anger (65% of divorces over age 50 are initiated by women). Bottom Line: "The Female Brain" is a great step forward. It is an easy read, with plenty of objective documentation in its end-notes.
Trustpilot
Copyright © 2022 Thriftbooks.com Terms of Use | Privacy Policy | Do Not Sell or Share My Personal Information | Accessibility Statement
ThriftBooks® and the ThriftBooks® logo are registered trademarks of Thrift Books Global, LLC