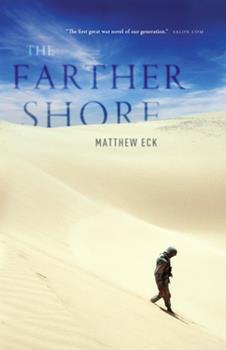 In his unforgettable debut novel, Matthew Eck puts readers inside the mind of a confused young soldier caught in the fog of unexpected warfare. A small unit of soldiers from the U.S. Army is separated from their command and left for dead. Their only option is to keep moving, in hope that they'll escape the marauding gangs and clansmen who appear to rule the city. Josh, a young soldier, and his "battle buddies" are left to wander in this hostile territory...

Thanks for the story

Published by Thriftbooks.com User , 14 years ago
Thanks for writing this story. It can't have been easy, and it wasn't easy to read. I couldn't stop reading, though. Great writing, deeply felt and very real- I'm a vet, too. I felt so cold reading the story I turned the heater up, until the kid complained he was boiling- but I'm still cold. Looking forward to your next.

Published by Thriftbooks.com User , 14 years ago
I sent my wife to buy the last Umberto Eco novel and she bought me this book by mistake. I read it cover to cover anyhow and it stuck in my head the next day because it was fantastic. The Farther Shore was a firecracker book, the kind that draws you in by getting your attention and never lets go. A perfect book. I would say more, but I don't want to hint away all of the good parts.

Published by Thriftbooks.com User , 14 years ago
The plot is simple; a small group of soldiers get separated from the rest of their unit in Somalia and need to find their way back. The opening is equally simple, and grabbed me from the get go. "It was full dark, midnight, and heat like that should have disappeared. Then the bombing started. Those poor souls, the poor fucks of the city, had no idea we were watching from the rooftop of the tallest building in town, six sets of eyes in the night, calling in rounds from the circling AC-130 Spectres. When they fired too close to the city's edge we'd make a call for them to move further out, into the unknown. When they veered too far out over the desert, we made another call. It was a tightrope, a balancing act, a burden we adored. We were spotters on the roof, recon in a city controlled by warlords and their clans." The main hero, Josh Stanz, doesn't think about the right or wrong of his actions - things that need to get done, do get done, and that's all there is to it. And, like Hemingway, Eck doesn't tell the reader either. It's up to the reader to decide. And, for this reader, the decision wasn't always very easy. I found this book interesting, challenging, compelling -- and look forward to read more of Eck's work in the future.

Published by Thriftbooks.com User , 14 years ago
This one's a gem. The visceral reality of the best combat writing seamlessly merges with the febrile surrealism of Camus, not in the sense of hallucinations, but in reality seeming surreal. The effect is a heightened sense of reality, believe it or not. Simple prose and story, profound results--the true sign of virtuosity.

The misery of war

Published by Thriftbooks.com User , 14 years ago
Eck's book could stand as a parable for America's war in Iraq or any of our imperial wars that are fought faraway by a few men whose agonies civilians can never understand. A small group of soldiers cut off from their unit find that everything turns sour fast. Without malice and following standard operating procedures, they kill children who set off alarms by walking into their night position. More horrors follow. The men Eck depicts are neither good or bad: they do terrible things and terrible things are done to them because that is what happens in war. In the area of operations Eck depicts, even nature is postindustrial, polluted, and hostile: "the ocean is out of tune." In this dismal setting that mirrors the soldiers' lives, Eck excels at depicting the fog of war where soldiers are lost, sick, and confused. Their actions are often dictated by chance in the midst of terrible situations. some die, others are mutilated, no one escapes intact. The novel shows men at war without the Hollywood soundtrack or the happy ending of the movie version of Black Hawk Down, where the survivors walk into safety looking dewy fresh as if from a good night's sleep and having missed no good meals at the studio's buffet. Even more than the novel's obvious applicability to America's hopeless mission in Iraq, this book stands on its own as a story of the misery of war. And these words apply to the experiences of Americans in many wars: ""We made a mess of this whole thing. And I'm sick with it."
Trustpilot
Copyright © 2022 Thriftbooks.com Terms of Use | Privacy Policy | Do Not Sell or Share My Personal Information | Accessibility Statement
ThriftBooks® and the ThriftBooks® logo are registered trademarks of Thrift Books Global, LLC