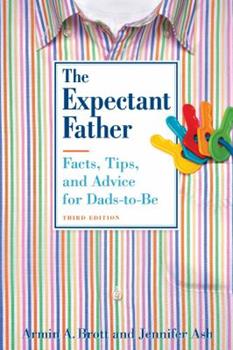 The Expectant Father: Facts, Tips, and Advice for Dads-To-Be

by Armin A. Brott and Jennifer Ash

This indispensable book explores the emotional, financial, and even physical changes the father-to-be may experience during his partner s pregnancy. Written in an easy-to-absorb format and filled with sound advice and practical tips for men on such topics as, how to make sense of your conflicting emotions, how pregnancy affects your sex life, and how to start a college fund. This volume reassures, commiserates, and informs. It also incorporates the...

Published by Thriftbooks.com User , 20 years ago
My appreciation for "The Expectant Father" grows as I read more fatherhood books. Most authors spend 90% of their book trying to convince new fathers that fatherhood really isn't so bad, that we should be nice to the mother and perhaps show up for a doctor's appointment once in a while. For those of us who are already excited about the prospect of having a child, this tact doesn't cut it.Brott certainly advocates being involved during the pregnancy, but he spends much more time explaining how to be involved. Topics from when to tell your friends about the pregnancy to financial planning are covered. More unusually for fatherhood books, Brott describes what the mother is experiencing and how the baby is developing. This has been extremely helpful as my wife's pregnancy has progressed.I keep this book handy, and refer to it at least monthly.

This is the ONLY book to buy for expectant dads

Published by Thriftbooks.com User , 21 years ago
My wife just had our first child a few months ago. While she was pregnant two of our friends gave me copies of The Expectant Father, which they recommended highly. I have to agree. I'd been reading my wife's pregnancy books, which were absolutely useless--they barely mentioned dads at all except to say that I should be sensitive to my wife's needs, which I already knew. And I'd checked out a few of the other pregnancy books for dads but they were so condescending and insulting that I practically gave up reading altogether. This book is completely different. It deals with men's concers in a straightforward, sensitive, funny way. It's filled with very insightful information that helped me make sense of the feelings I was having during my wife's pregnancy and activities that I could do to stay involved. It's not always easy to take the stand to be an involved dad and this book helped me realize that I wasn't alone in what I was going through. I know that this book has helped me be a better father than I ever would have before. I'll be giving it to all my buddies whose wives are expectant. AND, I've already started the next book in the series, The New Father: A Dad's Guide to the First Year. It's great too!

The best book on pregnancy for guys that I've read

Published by Thriftbooks.com User , 22 years ago
The author has the idea that the sooner dads get involved in being parents the better they'll be and that the best time to get involved is during pregnancy. I know this is true for me. I know it sounds funny but I felt like I was a real participant in the pregnancy. Yeah, my wife was carrying the baby but I was going through a lot of psychological stuff too and this is the only book out there that dealt with what my issues at all. I read this book twice--the first time when my wife and I were expecting our son and then again during the months before the daughter we'd adopted from Korea arrive. Both times I was amazed at how calming and educational and really funny this book was. I'd never been a dad before. Never even held a baby before my wife got pregnant and I wasn't too sure about what to do. Of course it's all pretty natural, but this book really made me realize that all the worries I was having were normal and it gave me lots of great ideas of ways to be more involved in the process. It also got me thinking about the kind of father I wanted to be and whether I wanted to be the kind of dad my dad was or some other kind.Being a father is really important for me and this book has made me a much better dad. I've been reading the next books in the series and they're just as reassuring and helpful. Thanks, Mr. Brott!PS I've caught my wife looking through the book and she's told me that it helped her understand me a lot better and made her see how important it is to me to be a good parent.

New Dad's to be MUST buy this book!

Published by Thriftbooks.com User , 25 years ago
This is a must buy for a brand new dad. Of all the books that I have bought on having a new baby, this proved to be the most informative and the book that I return to on a regular basis as a reference. It not only addresses the development of the baby, but the development of the new family. I found that it's insight into the emotional changes that my wife and I were experiencing were remarkably synchopated with our actual experience. I also found it to be very easy to read and follow. I would describe it as an ideal companion book to 'the girlfriends guide to pregnancy', and would recommend both new parents to read both books to get the male and female perspective of the experience. If you have to buy one book as a new daddy, have this be the one. I have just purchased the follow-on book, 'the new father' with the hopes that it equally illuminates the first year of the newborn.
Trustpilot
Copyright © 2022 Thriftbooks.com Terms of Use | Privacy Policy | Do Not Sell or Share My Personal Information | Accessibility Statement
ThriftBooks® and the ThriftBooks® logo are registered trademarks of Thrift Books Global, LLC