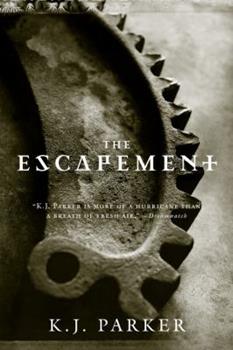 (Book #3 in the Engineer Trilogy Series)

The astonishing conclusion to the Engineer Trilogy, an exquisitely crafted tale of revenge from a unique and remarkable new voice in fantasy fiction. The engineer Ziani Vaatzes engineered a war to be reunited with his family. The deaths were regrettable, but he had no choice. Duke Valens dragged his people into the war to save the life of one woman - a woman whose husband he then killed. He regrets the evil he's done, but he, equally, had no choice...

Published by Thriftbooks.com User , 12 years ago
i was very satisfied with the condition of the product and the delivery was speedy.

A story of betrayal

Published by Thriftbooks.com User , 12 years ago
At times feeling like a continuous Greek tragedy, this trilogy is the search for truth with betrayal ultimately being the destination. Main characters who give the appearance to the world that they are in control search within themselves only to be betrayed by nations, allies, lovers and ultimately their own feelings. While the first 2 installments gives the reader a feeling of peeling away the layers to find what is at the core, book 3 yields what must be to the despair of all involved. Excellent style and rich characters punctuate the author's dark designs. I highly recommend the series with the caution that this is not a "feel good" endeavor.

Published by Thriftbooks.com User , 13 years ago
A fantastic series! (Note, this is not a stand-alone book, you must read the first two books.) This is a fascinating look at a true anti-hero who does what he *must* to accomplish his goals. K.J. Parker has created an interesting, richly detailed, complex and often very dark world. The characters are fascinating, and even sometimes likable. This series offers a glimpse into a person's world where "good" vs. "evil" are entirely subjective. Recommended for those who are fascinated by Iago, Machiavelli and/or Darth Vader.

Published by Thriftbooks.com User , 13 years ago
Fabulous. Amazing series kept me reading in every spare moment. All about love and how it motivates good and evil.

Published by Thriftbooks.com User , 13 years ago
Former guild military engineer Ziani Vaatzes once cherished his country the superpower Mezentine Republic. However, he understood the flaws in the military-guild-aristocratic complex that ruled the region making the neighboring Vadani and Eremians angry; the Empire used these nations as subordinate states to maintain their superiority. Ziani committed the worst transgression against the Guild and country when he tried to improve on the "perfect" economic model of suppression and was sentenced for innovative efficiencies crimes. He turned traitor selling military-industrial war machines. Many have since died, but Ziani remains obstinate even if it means the destruction of Civitas Vadanis with over a million people residing in it; but he also fears his barbarian allies will fail him. Mezentine Republic leader Secretary Psellus is stunned by recent events as his country's enemies have proven formidable in spite of massive slaughters of the civilian populace of his neighbors, as the insurgency remains strong against the occupation. He fears the ancient texts that guide him is failing as the Vadani and Eremians seem united in a common cause engineered by Vaatzes into an army of eight hundred thousand savages. Many innocent will die for either a belief system or for someone else's personal gain. The third book in The Engineer Trilogy (see DEVICES AND DESIRES and EVIL FOR EVIL) is a fascinating look at power; those who have it want more at any cost. The Republic has economic and military power over the region with their premise that savages are expendable in support of the status quo. Ziani remains narrowly obsessed as he comprehends his actions will leave thousands maybe millions dead; Psellus who has doubts is almost as narrow-minded and steadfastly stays the course. Other irresponsible leaders cloaking their motives behind the common good of security willingly send troops to die for a personal cause. Although at times the details are so explicit slows down the story line, readers will appreciate this strong look at the convergence of war, politics and economics. Harriet Klausner
Copyright © 2020 Thriftbooks.com Terms of Use | Privacy Policy | Do Not Sell My Personal Information | Accessibility Statement
ThriftBooks® and the ThriftBooks® logo are registered trademarks of Thrift Books Global, LLC