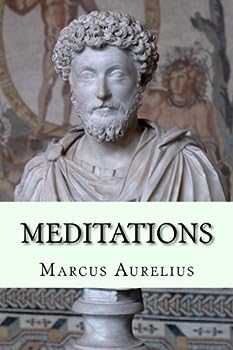 Meditations is a series of personal writings by Marcus Aurelius, Roman Emperor 161-180 CE, setting forth his ideas on Stoic philosophy. Marcus Aurelius wrote the 12 books of the Meditations in Koine Greek as a source for his own guidance and self-improvement. It is possible that large portions of the work were written at Sirmium, where he spent much time planning military campaigns from 170 to 180. Some of it was written while he was positioned at...

Published by Diana , 3 months ago
The introduction is longer than the book. This translation has a Christian slant to it rather than a Classical Pagan perspective that Marcus Aurelius would have held as a product of his time and environment, hence I am on the search for a more accurate translation. The book I received said "very good condition" however, that was not the case at all! EVERY SENTENCE in Book 2 was underlined and someone had written notes where they disagreed with the text.

Not as good as I thought

Published by GarentDrake , 2 years ago
Hearing about how great greek and roman philosophers and politicians were and how many of their concepts have shaped our modern world I was hoping to get something from this book as far as either knowledge or perhaps a philosophy for how to live life in a better way and I was disappointed in how the book repeats the same concepts over and over in different ways. I also didn't really find any concepts I was not familiar with.

Published by Sasha Hall , 2 years ago
I just want to warn others when choosing the edition the Dover Thrift is only 99 pages and “modernized” to a book that would be good for school age children but not the classic translation I was looking to replace. Also the cover is different than what was shown online.

2000 year old wisdom at your fingertips

Published by Thriftbooks.com User , 13 years ago
I couldn't help chuckling and nodding my head continually while reading Marcus' Meditations. His thoughts and life principles can be seen as repetitious through out Meditations (the books within it pretty much cover the same territory over and over, but actually cement his views firmly within your mind)yet they will give you great pause and reflection upon your own life. I can't think of any better primer for living in today's crazed, money-obsessed, celebrity-driven and unbelievably shallow world. He is a Stoic by definition, of course, but the man really knew the world and Man all too well and he would find no surprise in the opinionated, self-righteous nature of the 21st century. It's a short book, but is best read slowly and savored intellectually. I couldn't help but feel that all the Tony Robbins, Eckhard Tolles, Wayne Dyers, Deepok Chopras and Dr's Phils of our silly world pale next to his simple, yet solid principles and to some degree their books are derivitive of Aurelius' work. Highly recommended! I never reread books - there are too many wanting my time, but I will do so with this one. In truth it's a startling honest and insightful book of how to run your life and should be stuck in your backpack or suitcase for those times when you lose your patience with people, grow disillusioned and world-weary, or just want to travel back through time and communicate with a man that actually ran the entire Western World for a while, a man who took never took himself or the trappings of the world all that seriously.

Timeless wisdom for a weary world

Published by Thriftbooks.com User , 22 years ago
"Begin each day by telling yourself: Today I shall be meeting with interference, ingratitude, insolence, disloyalty, ill will, and selfishness-all of them due to the offenders' ignorance of what is good or evil. But for my part I have long perceived the nature of good and its nobility, the nature of evil and its meanness, and also the nature of the culprit himself, who is my brother; therefore none of those things can injure me, for nobody can implicate me in what is degrading" (To Himself, II.1). This selection from "Meditations" ("To Himself" was the original Greek title)captures so much of the essence of this incredibly powerful book. Marcus Aurelius at times sounds more like the Buddha, Lao Tzu, Hesiod, or James Allen than he does his Stoic forerunners: proof once again that true wisdom resides in every man's heart and mind and transcends the boundaries of time, place, ethnicity,and doctrine. The job of the philosopher is to reintroduce his pupils to THEMSELVES, and once the self is realized, the reality of the universe becomes much clearer ("evil" derives from delusions)and the temptations of excess and the fears of deprivation become less powerful. These are true words to live by, more so now than they have ever been before. Happiness can be found in simplicity; hard work DOES pay off; the cooler head always prevails; immoderate pleasures can kill and fear is often unfounded. Marcus, like Buddha, was born in the lap of luxury, but he was destined to hold a position in society for which he was not well suited by virtue of his sensitive and studious nature: the ruler of an ancient and corrupt civilization that dominated most of the known world. "Meditations" is Marcus's attempt to cope with a life and a job that he never really wanted. Thankfully, we can apply Marcus's self conversation to the trials and tribulations of everyday life (the same can not be said for most other volumes of Greco-Roman philosophy, and this is especially the case with the over dogmatic Plato). I urge you to read this. Once you do, I guarantee you will read it over and over again and it will take its place on your list of personal, life changing favorites. One last thought: keep in mind that Marcus was a pagan and don't let the fact that Bill Clinton enjoyed the book sway you from buying it... For those interested in the life of Marcus Aurelius the man, also read his biography in Volume 1 of the Loeb edition of the Scriptores Historiae Augustae.

A timeless meditation book for anyone

Published by Thriftbooks.com User , 22 years ago
Here is a great book of meditations for both believers and atheists. Marcus Aurelius was emperor of Rome with an unfaithful wife, a worthless son, and the duties of leading an army for 13 years in what is now Germany. Trying to cheer and console himself in the middle of a desolate area, he wrote down what he remembered of the Stoic philosophy which he had studied. His thoughts are inspiring and provoking. This is the book you want with you when life becomes tough. As Marcus' view of god is a pantheistic one, anyone can profit from his thoughts, whether atheist or believer. A book to read ever few years. Highly recommended.
Trustpilot
Copyright © 2022 Thriftbooks.com Terms of Use | Privacy Policy | Do Not Sell or Share My Personal Information | Accessibility Statement
ThriftBooks® and the ThriftBooks® logo are registered trademarks of Thrift Books Global, LLC