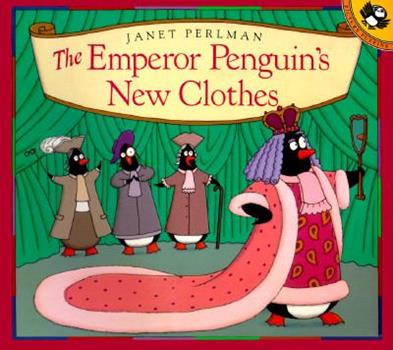 Published by Thriftbooks.com User , 17 years ago
I read a book called The Emperor Penguins New clothes by janet perlman.The story is about penguin Emperor getting new clothes and he has to get them by the time the parade starts.The Emperor finally found 2 cloth pretend makers which actually were not cloth makers.So one day he ordered them to make cloth out of some golden string and paid them gold to spin the string,but the Emperor didn't know they were thieves so of course they just kept the string.They started making imaginary cloth.The next day he grew tired of waiting for the new clothes so he immediately went to the room where the thieves were working. He told them to work faster but he was in luck.They were making cloth. He looked at the cloth but there was nothing to be seen. He didn't want to be dishonest and simple minded and he thought it would be terrible to b, so he made them dress him in it. Finally they were done.The parade started and the brave penguin walked out.Everyone was very astonished but then someone started clapping Dan then they all joined in. Suddenly one little boy said something very embarrassing. He said "Hey!" that guy has no clothes on at all. Everyone was silent for a moment. Then they started whispering and saying that he really didn't have any clothes on but the Emperor knew he had to go on. So he did and with that the thieves were never seen in town again. I liked this book because I like tricksters and the thieves in the story tricked the emperor. The theme and the message in the story is to never listen to people you don't know, because they could be planning something. The word choice in the story is very good because it makes me feel like I am really in the story. The conflict was nice and I liked it because it was person vs person. The illustrations were very good because they had lots of details. My favorite picture with lots of details. My favorite picture with lots of details was the one with the parade. The characters in the story were always suprised. The other version of the story i didn't like because it was old fashion and the pictures were ugly. I think somebody who likes this book should read it like kids because they are more interested.

Published by Thriftbooks.com User , 18 years ago
This retelling of the famous fairy tale, "The Emperor's New Clothes" has a joke. I guess the author picked a penguin for this story for two reasons: 1)because of the species of penguin called an emperor penguin and 2)because there is a famous joke that penguins never need new clothes because of the, "tuxedo" they supposedly wear. So in response to the quote that the emperor "had no clothes" I guess he actually did have on the "tuxedo" that penguins are said to wear.

Published by Thriftbooks.com User , 19 years ago
This is a very cute re-telling of the classic fairy tale The Emperor's New Clothes. Two scoundrels come into town saying they can make cloth that can't be seen by the dishonest and simpleminded when they really can't do anything of the sort. They trick the emperor into buying a suit of clothes of this imaginary cloth. Emperor wears the suit in a parade and gets heartily embarrassed when it is pointed out that he has nothing on.What makes this story unique is the use of penguins and the wonderful illustrations that are also bold and colorful. I never get tiered of seeing all the neat clothes that the penguins wear, from capes with fringe to billowing skirts, to sailor boy costumes, to clown suits. Also seeing penguins with hair and moustaches is really very cute. This author also wrote another book using the penguin idea. It is called 'Cinderella Penguin or, the Little Glass Flipper'.Loggie-log-log-log

Published by Thriftbooks.com User , 20 years ago
i think this story is tryingto teach kids to tell the truth because something could happen if you don't. in the story the pitchures were perfect for the text. the pitchures would better if they were more colorful though.

Published by Thriftbooks.com User , 22 years ago
This is a great twist on the well-known story, The Emperor's New Clothes. For those of you who don't know, an Emperor is the species of penguin with the yellow on his neck. Being an avid penguin collector, I love the book. It is funny, and I still enjoy reading it (I'm 15).
Trustpilot
Copyright © 2022 Thriftbooks.com Terms of Use | Privacy Policy | Do Not Sell or Share My Personal Information | Accessibility Statement
ThriftBooks® and the ThriftBooks® logo are registered trademarks of Thrift Books Global, LLC