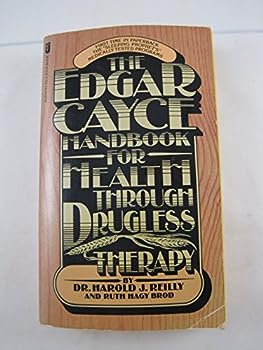 The Edgar Cayce Handbook for health Through Drugless Therapy

Dr. Reilly, a practitioner with 45 years experience in the Edgar Cayce therapies, combined the renowned psychics wisdom with his own experience in this home health manual. Filled with basic,... This description may be from another edition of this product.

Published by Thriftbooks.com User , 14 years ago
This is one of the best books on natural remedies. Easy to read too. Comprehensive. It has remedy ideas for almost all ailments; formulas that nowadays are proven true. And most important, ideas to keep oneself healthy, to prevent sickness. A must have for anyone's library and reference.

Published by Thriftbooks.com User , 14 years ago
This is a wonderful book on how to use the Cayce trance suggestions to maintain a healthy body. The first time I bought it, it happened to arrive while I was suffering with a terrible flu that was going around my community. At the time, my one-month-old baby was being breastfed. I realized I couldn't afford to be sick again with a newborn depending on me, especially since it's not recommended to take medicines while breastfeeding. I also felt wretched because of the painful head pains associated with this particular flu. You can imagine how motivated I was to get and maintain a healthy body. I began to follow the suggestions in the book immediately--switching to an alkaline-reacting diet, and as soon as I was well enough, incorporating the exercises suggested in the book. These included specific exercises for the morning and others before bed. With two small children, there were many nights I just wanted to crawl in bed, but I kept up with the exercise program even though I was often very tired. Amazingly, when the next round of flu went through the community, the other members of my family suffered with it but the baby and I sailed through without any symptoms whatsoever. The suggestions in the book, based on Cayce's trance source as put into use by Reilly's expertise as a top-notch physiotherapist, worked! There's much more in this book than diet and nutrition. There's also the famous Cayce castor oil packs and mixtures of oils for massage recommended for ailments such as arthritis. There's suggestions for increasing beauty and prolonging life. I like that Reilly quotes from many of the actual Cayce readings and that the publisher included the number of the readings. Many books about Cayce, such as The Edgar Cayce Remedies, which I also like because it is written by a doctor, refer to the Cayce readings but seldom quote them and if they do, they neglect to add the reading number. Today, it is so easy for members of Edgar Cayce's A.R.E. to look up the readings online that I appreciate the reading numbers if I want to consult the rest of the psychic reading. Reilly was recommended by Cayce in his psychic readings. Reilly thought that Cayce must be a doctor because his diagnoses and physiotherapy suggestions were so accurate. You can imagine Reilly's surprise when he discovered that Cayce was not a doctor but a psychic. Reilly is a real authority. He trained many physiotherapists and massage therapists. Edgar Cayce's A.R.E.'s health facility in Virginia Beach, Virginia is named for him and Cayce. If you want to know how to do many of the therapies suggested in the Cayce readings, this is the book for you. If want to understand Cayce and Reilly's insights into the workings of the body, get this book. If you prefer to keep healthy instead of cure illness, you need this book. By Carol Chapman, award-winning photographer of the ONLY Edgar Cayce calendar Divine in Nature: With Quotes from Edgar Cayce and author of When We Were Gods: Ins

Published by Thriftbooks.com User , 18 years ago
I own two copies of this book just so I am sure to always have one and can loan one to a friend. I trust the remedies of Edgar Cayce and have used them for over 20 years. I have lots of other books on health, including professional ones for doctors. This book includes all the basic info on diet, exercise and daily living to keep healthy. Having read many books about Edgar Cayce and spent many years experiencing the truth of his work I have great respect for him and trust his suggestions.

A few Almonds a Day Keeps the Doctor Away?

Published by Thriftbooks.com User , 18 years ago
I've owned this book for several years. Although I can't say that I practiced all of the treatments diligently or with regularity, it's surprising how much of the health and diagnoses information given by psychic Edgar Cayce in the 19th and 20th centuries, coincides with modern-day medical advice. I'd like to begin this review with a disclaimer. Please don't follow the advice in this book without being under the care or supervision of a doctor. In fact, Reilly suggests this before undergoing any of the treatments in the book. Although we now know most of the dietary advice that Cayce gave is now common knowledge, you have to remember that Cayce was born on March 18, 1877. He started readings at the age of 21 when he was afflicted with a paralysis of the throat, and continued his readings up until the time of his death in Virginia Beach,VA on January 3, 1945. Much of the advice we take for granted now was not known by dieticians, doctors, and the like when Cayce first gave predictions. Harold Reilly was the man who practiced many of Cayce's treatments. He's treated stars like Mickey Rooney, Robert Frost,Gloria Swanson, Bob Hope, Mae West, Jessica Tandy...among others.Cayce's dietary advice is as follows. For example, Cayce cautions against eating red meats, and instead encourages people to eat healthy portions of fish, fowl, and lamb. Also, pork is a no-no, except for crisp bacon. And encourages people to eat one raw salad a day - - composed of 4 plants that grow above ground to one below. Fried foods, starches and the like are to be avoided. Surprisingly almonds are the stand out as the miracle drug. Cayce says they're a great disease-prevention tool because of it's combination of phosophorus and calcium.The advice is amazingly detailed. It discusses how certain foods can affect the body's acidity/akalinity that can cause or prevent disease. There is also a section in the book which advises which "food combinations" are better-digested in your stomach than others. This book covers naturopathic treatments for a variety of ails from the teeth/hair down to the blood/toes/bones. According to Cayce's advice, eliminations are also essential to curing diseases. Eliminations are carried out through osteopathic adjustments, massage(with peanut oil,olive oil,etc;), colonics, packs(usually composed of cold pressed castor oil or other enemas, baths (steam, sitz,etc;). Also there are sections, with pictures, on exercise and massage. There are also internal cleansing diets (such as the apple diet) which are discussed. Reilly's book even has a small section on meditation. The massage is interesting because it coincides with what some Hindus do daily - - the self-abhyanga(abeeyanga) - - or daily massage to satisfy their doshas. Usually done with sesame seed oil or some other kinds of oil, right before bathing. My only quip with the book was the way it was organized was sometimes confusing. If Reilly gave advice on certain exercises, it was difficult to flip t

An apple a day can keep the doctor away.

Published by Thriftbooks.com User , 23 years ago
This book is a good shortcut past trial and error. It's a bit depressing that a lot of the foods, activities and attitudes we grow up with arn't good for us but it's nice to know what they are. With knowlage one has the ability to plan and re-invent ways to live better.If you would like to know the effects of your actons, attitudes or foods, this book is for you.
Trustpilot
Copyright © 2022 Thriftbooks.com Terms of Use | Privacy Policy | Do Not Sell or Share My Personal Information | Accessibility Statement
ThriftBooks® and the ThriftBooks® logo are registered trademarks of Thrift Books Global, LLC