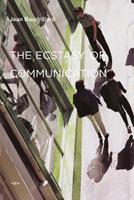 The Ecstasy of Communication

Baudrillard's essential crib-book, lexicon, and companion piece to any and all of his books and a prescient portrait of our contemporary condition. "The need to speak, even if one has nothing to say, becomes more pressing when one has nothing to say, just as the will to live becomes more urgent when life has lost its meaning." --from The Ecstasy of Communication First published in France in 1987, The Ecstasy of Communication was Baudrillard's summarization...

Published by Thriftbooks.com User , 20 years ago
This book is a riot and a total joy to read. Baudrillard skitters over all the modern fixtures (Nietzsche, Freud, Marx, Derrida) citing no one, instead whipping together confections that result in immediate addiction to his prosaic bakery. All his books glow like embers after being read, but this one in particular sews up a lot of his interests: modern existence enslaved by the eye, history as a mass recapitulation of fantasy put on by nostalgia, the secret as already always revealed.

Published by Thriftbooks.com User , 21 years ago
A major contribution to the theory of postmodernity written in a mentally stimulating way.
Copyright © 2020 Thriftbooks.com Terms of Use | Privacy Policy | Do Not Sell My Personal Information | Accessibility Statement
ThriftBooks® and the ThriftBooks® logo are registered trademarks of Thrift Books Global, LLC