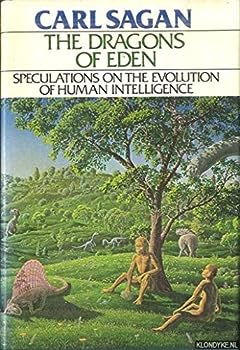 The Dragons of Eden: Speculations on the Evolution of Human Intelligence

Dr. Carl Sagan Takes Us on a Great Reading Adventure, Offering his Vivid and Startling Insight Into the Brain of Man and Beast, the Origin of Human Intelligence, the Function of our Most Haunting Legends -- and Their Amazing Links to Recent Discoveries. Book jacket.

Published by Rose Bryce , 2 years ago
It really is Sagan at his best as another reviewer wrote. Great images that never leave you! I miss Sagan. He was taken from us to soon. But you can be touched by his fine mind and great heart by reading this wonderful book. It's a treasure.

THIS is Sagan at his best!

Published by Thriftbooks.com User , 16 years ago
About nine years ago, in about an eight-month span, I read Cosmos, Demon-Haunted World, Shadows of Forgotten Ancestors, Dragons of Eden, Pale Blue Dot, Contact, and Broca's Brain. That period of time changed my life forever. Recently, I decided to bring a more educated and critical mind to Dragons of Eden, and I now realize why I read it so fast the first time: lucid, thought-provoking ... this is the kind of book, if there is such a one, that you sprinkle salt on and gobble up in one bite. Sagan was not anti-religion, he was pro-common sense. I challenge any intelligent, educated person to deny the essential truth of evolution after reading this (of course, the people who are most in need of reading this would never pick it up in the first place; Sagan, as they say, is preaching to the choir). He proceeds in his writing like he knows his general premise is correct (that humans DID evolve from lower life-forms) and he gently guides those who have doubts about evolution through valid arguments made simple, that appear to the critical and careful reader to be self-evident. But Dragons of Eden is not a polemic against creationism: in fact, the book is chock-full of biblical imagery and mythology, but is used for what should be its true purpose, to understand where humans have been, not where they are or are yet to go. Brilliantly illustrated, the Dragons of Eden rewards all who read it with a sense of enlightenment. Only the segment on computer technology towards the end of the book seems dated (but humorously quaint). After 29 years, this is a stupendous feat! It just goes to show that in 1976, Sagan was so far ahead of nonscientists that we are still catching up to his vivid examples of the evolution of human intelligence. I have two young children, my wife and I are full-time students, and we have been broke in both money and sleep for many years now. But Sagan, with this simple yet eloquent statement in Dragons of Eden, helps me cope: "The price we pay for anticipation of the future is anxiety about it." Amen, Mr. Sagan!

Turn your Thinking about Thinking Upsidedown.

Published by Thriftbooks.com User , 18 years ago
I had certainly heard of Carl Sagan, but only in terms of cosmology. I had no idea that he wrote extensively on the field of evolutionary biology-stimulated by his wife, the biologist Ann Druyan. My field is not science, so The Dragon's of Eden was my first encounter with the idea of the tripartite brain. The idea does not originate with Sagan, as he himself points out, but this slender volume makes the idea quite assessable for the lay person and, more importantly, it creatively explores the idea's possible implications. Although I read this book years ago, I have thought of it several times a week since then, as I speculate upon some of the biological causes of human behavior. Newer models of the brain have already proved some of the basic ideas in this book as a bit oversimplified, but if you are looking for an introduction to speculating about how the brain's evolution may shape human behaviors, this is great place to start. I found the book a "mind blower"-and I always pick it up used when I see it to give to friends. Prepare to have your perception of perception itself turned upside down.

Published by Thriftbooks.com User , 18 years ago
This was the first book I read by Cark Sagan while in college. As a layman, I found it to be completely accessible and absolutely fascinating. Among the most memorable of his well-thought out and original theories are: his belief that man's inherent fears of snakes and heights can be traced back to his days as a tree-dwelling primate during which the snake constituted his only natural enemy; his idea that the ogres, elves, goblins, and "little people" that pop up in every culture's myths and fairy tales are genetic memories of a time when man's ancestors shared the earth with other intelligent humanoids; and his speculation that perhaps man is the only primate capable of verbal speech (chimpanzees and other primates are right on the brink, so to speak, as evidenced by their quick grasp of sign language) because his ancestors engaged in genocide against other linguistic humanoids- their primary competition. Sagan is best known as the man who popularized astronomy. But this book, one of his best, shows that he was just as interesting when he focused on man's origins, as opposed to his destination.

Fun, Interesting, and Ahead of its Time

Published by Thriftbooks.com User , 20 years ago
Carl Sagan really does a great job of going step by step, through the brain, explaining the processes, and giving a clear understanding to the reader of how we can see the evolution of our brains from those of lowly worms, to fish, reptiles, mammals, and eventually us.We are living proof of evolution. Carl Sagan is great at teaching us that. He is funny and interesting, makes his points clearly and concisely. He was (and continues to be) one of the greatest, most skilled popularizers of science ever, period. You'll laugh, you'll think, you'll talk about it with your friends. You will NOT be bored.Reading this book really made me feel at one with science and myself -- the strange organic computer in my head which is my brain. I was overwhelmed. Even though this book was written over 20 years ago, Mr. Sagan speculates on theories that even now are being confirmed -- such as that structures inside the brain are responsible for spiritual or religious experiences or ecstasy. I knew it was true when I read it because I experienced this ecstasy while reading the book -- and it sure wasn't God pushing the buttons! Get this book!On a last note, I also read Broca's Brain by Carl Sagan. It was a little more outdated and not quite as interesting. Much of the topic material is the same. You don't, therefore, need to read them both. Just get Dragons of Eden.

Published by Thriftbooks.com User , 21 years ago
This is a book that should be read by all psychologists, psychiatrists, explorers of Artificial Intelligence or basically just anyone with an interest in what human intelligence is. If there is one thing that research in AI has taught us, it is that we really don't understand what intelligence is. The scientific credentials of Carl Sagan are impeccable, as he is one of the premier astronomers of this century. However, in this book he engages in speculation about the organization and structure of the human brain. In doing so, he also demonstrates that he himself is possessor of a brain of the first magnitude. The title is derived from his thesis that the innate mammalian fear of reptiles is a genetic endowment left over from a titanic battle. Independent of the reasons, mammals emerged victorious, at least temporarily, in the evolutionary struggle for dominance. The remnants of that struggle live on in our myths and subconscious fears. Sagan's recounting and descriptions of those fears have major ramifications for the development of artificial intelligence. Our brains are constructed of several sections, all of which are overlays of a core that could rightly be considered reptilian. It would appear from this that the construction of an artificial intelligence should begin with a simple core followed by the continued construction of advanced overlays. One of Sagan's major fields of effort was exobiology, the informed speculation about life and intelligence in places other than Earth. At this time, it is still a theoretical field, but that does not mean that it is not based on hard science. The speculations that he engages in in this book are also based on hard science, and an honest reading will force you to reconsider the construction of the human brain. Our primitive pieces occasionally rise to dominance, perhaps showing us what those mighty reptiles were really like. Sagan is no longer with us, and his presence is sorely missed. However, he has left one of the most compelling legacies that will continue to enhance the human perspective for a long time. This book is a major contribution to that legacy and it is a book that everyone should read.
Trustpilot
Copyright © 2022 Thriftbooks.com Terms of Use | Privacy Policy | Do Not Sell My Personal Information | Accessibility Statement
ThriftBooks® and the ThriftBooks® logo are registered trademarks of Thrift Books Global, LLC