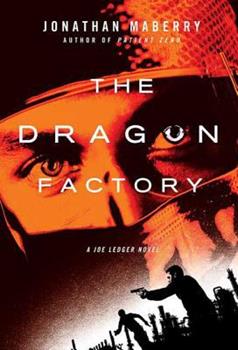 (Book #2 in the Joe Ledger Series)

Joe Ledger and the DMS (Department of Military Sciences) go up against two competing groups of geneticists. One side is creating exotic transgenic monsters and genetically enhanced mercenary armies; the other is using 21st century technology to continue the Nazi Master Race program begun by Josef Mengele. Both sides want to see the DMS destroyed, and they've drawn first blood. Neither side is prepared for Joe Ledger as he leads Echo Team to war under...

Published by Thriftbooks.com User , 11 years ago
This was another random pick from our local library's new fiction shelf. This was fast paced, gritty and just far out enough to keep my attention. For the last half of the book I couldn't put it down. The moral of the story: there is real Evil in this world and it has names and faces. Short of giving away key elements of the story line, suffice it to say that the evils of Eugenics and Nazi racial programs did not die with Adolf Hilter. The story threw curves that caught me off guard, and even had a lesson in morality. We are who we choose to be, not what we are born. I will definitely read another Maberry book, probably all of them!

Better than most movies!!

Published by Thriftbooks.com User , 11 years ago
This was a book that I could absolutely not put down. As the second installment of the Joe Ledger series, this one breaks away from the previous with regards to the main foes. Gone are the zombies and in are the genetically modified organisms of staggering proportions. What we(hopefully) consider as pure science-fiction, Neo-Nazis have created with intent to use for world domination. The book itself is of decent length so you definitely get your moneys worth. The writing is absolutely superb; I can not point to one part of this book where I was bored. Usually you get a section here or there which requires detail and takes away from the excitement of the story. Mr. Maberry somehow incorporates the required information alongside the action in an all out, action-packed novel that will keep you up until 3am reading. After reading this, I will definitely pre-order the next in the series in 2011.

A Killer Second Installment of the Joe Ledger Series

Published by Thriftbooks.com User , 11 years ago
Patient Zero was easily my favorite book of 2009...as a lover of fast-paced thrillers and amazing action sequences, Maberry hit the spot! In Patient Zero Joe Ledger came out swinging, shooting and slicing as he faced off against psycho Islamic terrorists and hordes of ZOMBIES! Seriously...could you think of a more evil combo?? As the latest installment of the Joe Ledger series, Dragon Factory lived up to and exceeded all of my expectations! This is an EPIC story, with some certifiably insane villains, vicious plot twists and again...NON-STOP ACTION!!! Zombies and terrorists were pretty great, but Maberry upped the stakes in DF and includes genetically engineered super soldiers, Nazis, Super rich/evil albino twins, a host of mythological creatures, Russian mercenaries and a looming extinction wave!!! With all of this new evil introduced, Maberry's unrivaled ability to write action/fight scenes, and the intelligent story line, I'm putting my money on this being my favorite book of 2010! Keep writing killer books Maberry...I can't wait for the 3rd Ledger novel out next year!

Published by Thriftbooks.com User , 11 years ago
The only thing disappointing about this book is the ending. It' too bad it had to end!! Great book! Jonathan Maberry is now one of my favorite authors. I can hardly wait for his next Joe Ledger novel to come out next year. Joe Ledger is all the action heroes wrapped up into one and is better than Jack Bauer! The only thing I missed in this novel was Joe Ledger's sarcasm. In the first book, Patient Zero, Joe Ledger has this great sarcasm but it was missing in this novel. I know what he went through in Patient Zero, but he couldn't have lost his sarcasm. Still a great read, but Joe needs to be a smart ass again. Love your books Mr. Maberry!!

Published by Thriftbooks.com User , 11 years ago
Johnathan Maberry's 1st Joe Ledger novel grabbed those zombie enthusiasts by storm with his debut new series starting with Patient Zero. Although my wife and I loved that book, after just finishing his brand new one here, The Dragon Factory we thought was somewhat even better. Something most writers don't do: Making bigger and better sequels. In the Dragon Factory, Maberry ups the danger ratio so cranked up that it made the dangerous zombie scenario he created in Patient Zero seem almost like a cakewalk. Trust us people, when we read the last 100 pages of the Dragon Factory, we knew that this writer has hit his feverish peak and stride in writing nail-biting, edge-of-your-seat thriller ending of this phenomenal novel. The Dragon Factory is multi-threaded, has numerous new and horrendously diabolical new bad guys with colorful henchemen of various varieties. In fact, we'd venture to say this new novel has some of the most colorful bad guys, and so darn creepy, that they actually made the latest Joker in the Dark Knight look like a mere punk with a bad mud-caked face paint. (Yes, they are that horrific, both in looks as in diabolical design.) Joe Ledger and his DMS team are stretched thin and up to their necks in world saving, clock-ticking danger that could easily eradicate most of the human race. If you like thrillers with sci-fi/Horror tones, with loads of Clancy-like ultra-techno secret combat commandoes, then mixed in with colorful comic-book-like larger than life characters, (but not in a cheesy way), with a spice of a love story, and all of them mixed with a dash of James Rollins and David Golemon and Matthew Reilly - but with a heavy dose of Johnathan Maberry at the height of his writing prowess - then you are gonna love The Dragon Factory. On the back cover, it is written that Sony Pictures has optioned this series. Man, if they can truly make a major motion picture here - and do it right - this would be a mega-hit bluckbuster with no problem. With a sequel already bigger and better, ready to be made. We very much look forward to Maberry's next Joe Ledger novel. How is he gonna beat this one is anyone's guess. Major kudos goes out to you, Mr. Maberry!
Copyright © 2020 Thriftbooks.com Terms of Use | Privacy Policy | Do Not Sell My Personal Information | Accessibility Statement
ThriftBooks® and the ThriftBooks® logo are registered trademarks of Thrift Books Global, LLC