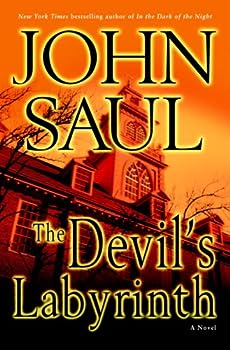 The Devil's Labyrinth: A Novel

This description may be from another edition of this product. For more than three decades, bestselling novelist John Saul has been summoning macabre masterpieces from the darkest realms of his imagination. With each new book, his instinct for playing upon our...

Published by Thriftbooks.com User , 13 years ago
I paid full price for this book at the book store - $7.95 paperback! It was good, but I have definately read better from John Saul! If you are a true fan of his books then you will read it!

Published by Thriftbooks.com User , 13 years ago
I've been a horror fan since the day of Jaws and The Amityville Horror. So whenever a horror book makes it to the New York Times Best Sellers list, I've got to read it. The reason is I'm chasing the boo factor. I just love those scare-the-pants-right-off-ya novels; and let's face it, John Saul's books ranks at the top.

From Start to Finish

Published by Thriftbooks.com User , 14 years ago
This book dealt with different peoples lives, and sometimes that can be confusing, but not this book. I was captured into, once reading one chapter, I found myself starting the next one. I could not put the book down at least not for long. I wanted to read what happened in every chapter, until the end.The book kept me spell bound, and the ending was so good, that after finishing it, I could actually say I read a good book, that ended just the way I wanted it too.

Published by Thriftbooks.com User , 14 years ago
Saul's thriller is fantastic... It's a demonic-possession tale set in a Catholic school in Boston. Because a 15 year old boy named Ryan McIntyre has been picked on and beating as his public school his mother sends him to St. Isaac, a private school to finish his studies. Two boys Ryan's age have vanished from St. Isaac, and a mystery begins. By the end of Ryan's first week at St. Isaac, one of the missing boys has been killed by police while committing bloody murder. During week two, Ryan finds the dead body of the other misplaced boy in the secretive tunnels beneath the school. There is a priest at the school, a "Father Sebastian" who be-friends Ryan and tries to help him in his new move to the school. The psychologist-priest is an exorcist, too, and has found a primeval summoning rite that allows an exorcist control of the evil to be found in anyone. He feels the school in evil and possessed by a demon that needs his exorcising ability. Sebastian has been testing his find on St. Isaac's students, and he has a schema, part of which is to get Pope Innocent XIV to come to Boston. (I won't give the story away.....) This novel and plot is actually a bit different for Saul. It is disturbing and a bit abhorrent at times; my kind of book.

Published by Thriftbooks.com User , 14 years ago
John Saul has written another thrilling novel, and this time, he writes about a very controversial and little-known subject: exorcism. Ryan McIntyre is a sixteen-year-old student at Dickinson High School. He's a good student and gets good grades, but the weight of his father's death in Iraq is weighing heavily on his mind. One day, Ryan is severely beaten by some fellow students. His mother, Teri, acting on the advice of her new boyfriend, Tom Kelly, enrolls Ryan at St. Isaac's Catholic Boarding School in the hopes of removing Ryan from danger. Unfortunately, Ryan's danger is just about to begin. St. Issac's has a terrible secret; one student, Jeffrey Holmes, has disappeared without a trace and another, Kip Adamson has killed a woman. Kip himself was shot by police while in the act. However, despite these occurances, Ryan settles in and even meets some new friends, including Melody and Sofia. Ryan also meets and befriends Father Sebastian. In the next two weeks, Ryan's life will change forever. Father Sebastian, who claims to have mastered the ability to exorcise demons from people is, in fact, doing just the opposite: He's putting evil into people; an evil which he himself can control, and Ryan, Sofia, and Melody are the three chosen to do Sebastian's evil bidding. To complicate matters even further, the Pope has been made aware of Father Sebastian's apparent successes with exorcism, and he has planned a visit to Boston to observe Father Sebastian's techniques first-hand. But Father Sebastian has his own plan in mind for the Pope, and Ryan, Melody, and Sofia are to be his pawns to carry out his plan. Ryan has a crucifix which his father gave to him which is supposed to protect him from evil. Will it work, or will Father Sebastian succeed with his diabolical plan? This book is a first-rate thriller. The crescendo builds throughout the book until the entire story is brought together at the end. The characters are well-developed, and the reader can easily identify with them. The story is well-written and covers a major religious controversy; the rite of exorcism. I recommend this book very highly. It is a first-rate supernatural thriller that will keep the reader guessing until the exciting ending.
Copyright © 2020 Thriftbooks.com Terms of Use | Privacy Policy | Do Not Sell My Personal Information | Accessibility Statement
ThriftBooks® and the ThriftBooks® logo are registered trademarks of Thrift Books Global, LLC