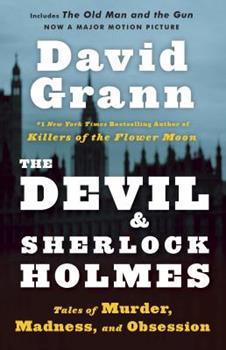 The Devil and Sherlock Holmes: Tales of Murder, Madness, and Obsession

Features "The Old Man and the Gun," the basis for the major motion picture starring Robert Redford, Casey Affleck, Sissy Spacek, Danny Glover, and directed by David Lowery. From the #1 New York Times bestselling author of Killers of the Flower Moon comes this "gripping" ( The Miami Herald ) and "hilarious" ( EW ) collection of real-life mysteries about people whose obsessions propel them into unfathomable and often deadly circumstances. Whether David...

Published by Thriftbooks.com User , 11 years ago
I brought this book on an airplane with me. I was looking for some entertainment and I am a fairly big Sherlock Holmes fan. This book isn't really about him that much but it was still very interesting. The short story format is excellent. It really helps the flow of the article. The broad subject focus kept me entertained and even though some of the themes are recurring, it doesn't come across that way. The Ricky Henderson part was excellent as it was something that I myself have thought as times. However the idea that refusing to retire and texas arson could be linked was intriguing and excellently executed. My only complaint about this book was that I was sad when it ended. It was a fun ride from start to finish and I really look forward to reading David Grann's next work. This is a book you will not want to miss.

Published by Thriftbooks.com User , 11 years ago
This collection of essays is extremely readable due to the unusual nature of the topics. They range from stories about an author who details an actual unsolved murderl to a scientist obsessed with finding a live giant squid. Some, like a story about an aging baseball player obsessed with returning to the major leagues and one about the tunnel workers of New York City, are less sensational but fit nicely into the volume if only as a respite from some of the more bizarre stories (like a tale of lust for power and ensuing murder by the prison gang The Brand). The opening story, also a page turner, about the leading Sherlock Holmes scholar who turns up dead under circumstances reminiscent of a Holmes' mystery, is probably the most bizarre of the series. The author writes in a sparse but descriptive style that quickly guides the reader to the usually thrilling conclusions.

Published by Thriftbooks.com User , 11 years ago
This book is a collection of articles on various subjects (all true stories) focused around the basic theme of madness and obsession. The writing style is concise, straightforward, simple yet intelligent. I found it very easy to read and get completely absorbed in the stories. Here, briefly is what each article is about - A scholarly expert on Sherlock Holmes and Holmes's creator, Sir Arthur Conan Doyle, is found dead. It may or may not have been murder. - A Texas man is convicted and executed for allegedly setting fire to his home and killing his children. Subsequent investigation indicates he may have been innocent. - A French con-artist pretends to be a missing American teen, even fooling the boy's parents. Or is there more to this case than meets the eye? - A decadent postmodern Polish novel may be the author's confession to a cold-case murder. - A New York City fireman on the scene of 9/11 when the towers fell is the only one from his company to survive. He has no memory of the event, and is obsessed with finding out whether his behavior that day was heroic or cowardly. - A marine biologist in New Zealand will never give up until he captures a live specimen of the elusive giant squid. - New York City's water supply comes through two large aqueduct tunnels. Both tunnels are old and in disrepair. It's a race against time to finish City Tunnel #3 before the old system fails. - Forrest Tucker, the last of the classic hold-up men, is arrested for bank robbery at the age of 79. - Rickey Henderson, record holder for most bases stolen in Major League Baseball, refuses to retire. He keeps on playing for a podunk minor-league team, and nobody can figure out why. - The Aryan Brotherhood has become the most powerful and murderous prison gang in the country. Authorities are finally beginning to crack down on the gang, but how do you punish men who are already serving life sentences in maximum-security prisons? - Youngstown, Ohio is still ruled by an old-school mafia network that has become obsolete nearly everywhere else. - Emmanuel "Toto" Constant, leader of the notorious paramilitary group FRAPH which terrorized Haiti in the 1990s, is living freely among the very people who hate him most: the expatriate Haitian community in New York. The stories are fascinating and very readable. The manuscript is incredibly clean; even in the preview copy I noticed absolutely no spelling or grammatical errors and only three typographical mistakes. I'm mentioning this only because I've seen published "final versions" of some books that were loaded with errors. To see a bound galley with almost no mistakes in it is very impressive. I can find not a single flaw with this book, nothing to complain about .. and it was enjoyable to read, so I give it a full 5 stars.

Investigative journalism / history at its best

Published by Thriftbooks.com User , 11 years ago
By and large, these essays are completely gripping, in a thinker's sort of way. David Grann creates a narrative out of his search for meaning and closure in far-flung topics, and it's clear that he has done a lot of original research here. He has interviewed the people whose lives touch the topics of his essays, attempting to bring order to the chaos of unsolved investigations and answers to baffling human behavior. In a few cases, I found myself wanting to pursue the topic. Especially in the case of the man who was executed for arson in Texas, the conclusion that he may have been innocent is of more than academic interest. I found myself bringing up the narratives in this book in conversation--can you believe this? did you know that? do you think this could be true? And I love that. When a book grabs me beyond the moment; gives me something to mull over and chew on; entices me back for another narrative--then I know I have found a treasure.
Copyright © 2022 Thriftbooks.com Terms of Use | Privacy Policy | Do Not Sell My Personal Information | Accessibility Statement
ThriftBooks® and the ThriftBooks® logo are registered trademarks of Thrift Books Global, LLC