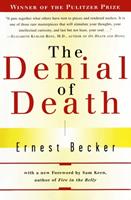 The Denial of Death

Winner of the Pulitzer prize in 1974 and the culmination of a life's work, The Denial of Death is Ernest Becker's brilliant and impassioned answer to the "why" of human existence. In bold contrast to the predominant Freudian school of thought, Becker tackles the problem of the vital lie -- man's refusal to acknowledge his own mortality. In doing so, he sheds new light on the nature of humanity and issues a call to life and its living that still resonates...

Helps you be human

Published by Thriftbooks.com User , 18 years ago
Book Review / The Denial of Death by Ernest BeckerNearly 60 reviews have already been posted on this book, many delving into the ins and outs of the psychological theories Becker proposes. So, I simply want to report the impact this book had on me.Over decades of reading, I have sought authors who will admit the truth. Becker does.To find a book that insightfully examines -- with a clear, steady gaze -- the profoundest fundamentals of human existence is quite rare. I have read thousands of books in my life, and Becker's is one of the few that genuinely qualifies. He dares go where many fear to tread. But, death and our denial of it, he establishes, is at the core of human existence and a root force shaping both human personality and human society. I imagine it is impossible to understand life without grasping this. Becker brilliantly analyzes why and how we avoid acknowledging this fact at all costs.If you have the courage to look at the core of things; to examine your own denial of death and how it has -- and currently is -- shaping your life; then this book is for you. It is for readers who find the truth fundamentally more liberating, than intimidating.Becker helped me become more honestly human. He also helped me feel less weird, ( i.e. neurotic) by acknowledging that much neurosis stems from being constantly and painfully aware of the actual facts of existence. Despite the "heavy" topic, Becker's overall writing style is lucid, accessible, even engaging, and without posturing. Only occasional sections lapse into rather turgid debate of psychological theory.If you want a book that calmly stares you straight in the face, while dissecting what really matters; if you are looking for a book that can help ground you in the center of reality, here it is.

Masterpiece of synthesis and insight

Published by Thriftbooks.com User , 20 years ago
There are some books that are brilliant because they delve deeply into one subject. There are other books that are brilliant because they synthesize a panorama of other great books. Finally, there are perhaps the rarest of works that in one book combine the insights of many other brilliant tomes and make the synthesis seem like one subject. "The Denial of Death" belongs to this rarest of books. The excellence of the insights on so many pages is breathtaking, and it's only fitting that Becker, certainly a great writer previously, made his last book, published shortly and ironically before his death, his best. Becker states at the outset the problem in our day is not that there isn't enough knowledge, the problem is that there isn't enough integration of this knowledge into a kind of wisdom that would properly summarize the accumulated knowledge. At the outset he acknowledges the difficulty in claiming that there is one direct insight into what causes (almost) all of the neuroses of life, which is the inability of people to see and overcome what I feel is the ultimate paradox of life, that we live and die at the same time. Yet in one book Becker succeeds so well it is astounding! To summarize a summarizing book is difficult indeed! Basically what Becker claims is that man has twin but conflicting ontological needs/motives - to individuate and yet at the same time to feel a part of something greater. Man is a paradox in many other ways. Unlike other animals inside he (I will omit she to keep it simple) is largely symbolic - in his mind he can imagine the farthest mysteries of the universe, he can philosophize about the deepest meanings of life and its purpose. Yet like other animals man is anal (discussed extensively!) and possesses a body that is only too mortal. Countless times Becker makes the point that the way most people live with these paradoxes is a "lie in the face of reality." That is, starting from childhood most people use all kinds of repressions to pretend that they aren't going to die. Much of society is based on symbolic systems for people to feel heroic, because when we achieve heroism we feel that we have transcended our mortality. Much of this heroism is in fact false, even disempowering, because for example most pointedly with entertainers and athletes we often in fact project our need for heroism onto them. In psychology this is called transference, which manifests itself in group psychology and other ways that Becker thoroughly covers. Modern man has lost its way because science has removed the need for God, something transcendent beyond the physical life. Transcending Freud, citing Otto Rank most by far, as well many other fine psychologists, and even including Kirkegaard who predated them, Becker claims that it has been "scientifically" proven that the only way for man to deal with his fate, to achieve his innate heroic need, is to give his life up to something greater than the phy

A Broad-Based and Meaningful Theory of Human Motivation

Published by Thriftbooks.com User , 22 years ago
About the Book: All animal species are pre-wired with a survival instinct. Unlike other species, man is cursed with self-awareness which makes known to him his ultimate destiny with death. This realization engenders abject terror. Yet, man has to repress this terror (narrow consciousness) so that he can move through life with equanimity and precision. To do so, culture provides immortality scripts that if lived up to, help attenuate death-related terror through cognitive and emotional means. Emotionally, cultural prescriptions toward immortality elevates self-esteem and buffers against death related fear. This is possible because on a cognitive level, cultural scripts allows one to deny their mortality either through literal (heaven or Nirvana) or symbolic means (e.g., literary immortatlity). Because these cultural prescriptions to immortality are important to everyday functioning, they are refered to as man's vital lies. The problem with these immortality scripts is that they create continuous holy wars between people of differing worldviews: The very prescence of an alternative immortality script insinuates that the favored immortality script may be wrong. This motivates attempts at transelytization or the murder of dissentors (clearing the world of evil). This books well explains the basic human condition, why man's narsisistic nature cannot be helped, why man needs others to build a symbolic (or false) self, why human interaction is fraught with the policing of experience (politics), why being closer to God requires a hierarchy of subordinates and superiors, why man cannot handle freedom (he wishes to be enslaved), how man diffuses responsibility across a group, and more generally, why life, for most, cannot be fully lived (present centered) because most live life as a preperation for death (a chronic outcome- or future orientation taking man out of life). This theory of human motivation is broad and thus meaningful and well synthesizes many otherwise disparate theories or schools of thought into one coherent work. In recent years, Terror Management Theory has provided empirical support for some of Beckers central claims. A must to put into your theoretical toolkit. A good contrast to Beckers work which argues that human motivation leans toward a don't die orientation, is the idea of autotelic motives or human motivation as a live well orientation. To this end, you may want to read Mihaly Csikszentmihalyi's Flow: The Psychology of Optimal Experience. Flow is described as timeless absorption into the task at hand. The task inducing flow is said to bring one's consciosness to a present-centered state (where the devinity - life itself - exists). People who are often in flow are said to be happier. Present centeredness is emphasized by the ancients and many present day therapists alike. I recomend comparing and contrasting these two aforementioned theories.
Copyright © 2022 Thriftbooks.com Terms of Use | Privacy Policy | Do Not Sell My Personal Information | Accessibility Statement
ThriftBooks® and the ThriftBooks® logo are registered trademarks of Thrift Books Global, LLC