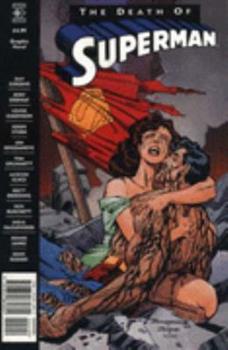 This description may be from another edition of this product. The story that drew national media attention when DC Comics killed their greatest hero is collected here, in SUPERMAN- THE DEATH OF SUPERMAN! When a hulking monster emerges from an underground resting...

The Biggest Superman Story You Will Want To Read!!!!!!

Published by Thriftbooks.com User , 14 years ago
I finished this comic book in 15 days and it was an exciting story about superman's death.Although you might want to buy this book because it's a really good story and tells about how superman died.It was kind of a sad story at the end part because it says:''For This Is The Day--That A Superman Died.''and it's kind of sad and even a superman fan won't appreciate that.I was going to get World Without A Superman after reading Death of Superman,but the one of the most superman comic books I wanted to read was The Return of Superman because I want to know how he came back.Anyways,this comic shows a lot of action,which I became interested in buying this book because a lot of people say that this was the biggest event that happened to superman and it became known as the best-selling graphic novel of all time!It really was a great story either superman fan or not,you should really read this book,it is such a good story and as you read this book,you'll become interested in reading more in this comic book like I did.It's worth the buy.

Not bad, but not complete

Published by Thriftbooks.com User , 16 years ago
To begin, it should be noted that 'The Death of Superman' is not a complete story. It is the first part of a story that ended many volumes and several years later in another Superman story called 'Hunter/Prey'. Technically this volume should be read first, followed by 'World Without a Superman', then 'The Return of Superman' and finally as I stated earlier, 'Hunter/Prey'. Also of interest if you liked these stories would be the earlier Superman issues which establish the origins of Hank Henshaw, aka Cyborg Superman, who appears in 'World Without a Superman' and 'Hunter/Prey'. Basically if you read this book alone, it will be nothing more than a very long fist fight between Doomsday and Superman with a bunch of questions left unaswered, which seems to be a complaint of many reviewers here; the story doesn't move very far and doesn't really have that much story present. It's a valid complaint since this is all you're getting if you buy this book here, but it should be known that if you're willing to invest the money in all the books, you'll be treated to one of the most epic and interesting Superman stories ever told. For instance the villian Doomsday, who seems like little more than an evil Hulk rip-off in this story, gets established with a unique and sorrowful origin by the end of the series (I won't give away any details other than to say that he is sort of like an abused child to the hundreth power) which might actually make you feel sorry for him. And the Cyborg Superman is one of the vilest and most dangerous villians Superman has ever faced. I do recommend this book. Just remember; if it seems incomplete when you finish it, it's because it is!

Published by Thriftbooks.com User , 16 years ago
Unbeknownst to Superman and the rest of the Justice League of America (JLA), there's trouble headed their way; trouble in the form of a humanoid walking across the landscape destroying everything in its path. When the JLA swings into action, they little realize just how powerful this creature really is. When this Doomsday creature defeats the JLA and heads towards Metropolis, Superman realizes that he must stop this creature, no matter the cost. This graphic novel is part one of a graphic novel trilogy, and should NOT be read in exclusion of the other two. That is to say, it really does not have a complete storyline, ending with a lot of unanswered questions, and the Man of Steel assuming room temperature (no spoiler here, you could get that from the title). But, that said, my eleven-year-old son and I found this to be a great and exciting story. Overall, if you want a good Superman story, then we recommend that you get these books!

The biggest event in Superman's life

Published by Thriftbooks.com User , 17 years ago
This is still one of the biggest stories in comics publishing. I remember the media event this storyline was in 1992, with regular newspapers announcing that DC was going to kill the Man of Steel. I anticipated it months before the comics came out. As it was, I scrounged around half a dozen newsstands trying to get all the issues (no comics shops where I grew up). I missed a few parts, but I got the final part of the battle where Superman dies. It moved me like few comics stories do. I really cared for Superman since John Byrne revamped the character in 1986. He was a more vulnerable, human character with more interesting stories. At this time in his career, Superman had just joined and become leader of a new Justice League, post DeMatteis and Giffen. His colleagues in the JLA; Bloodwynde (Martian Manhunter), Guy Gardner, Booster Gold and Blue Beetle among others all join Superman to stop this immensely powerful Doomsday character who is wreaking destruction all the way to Metropolis after breaking out of some secret prison. Doomsday's origins and motives are not revealed in this story (see Hunter/Prey), but the mystery of this character works here. After Doomsday swats aside the rest of the JLA like they were nothing, he and Superman fight to a bloody stalemate. This is the most punishment Superman has ever taken in his life and it shows. Of course, you know he dies. But he manages to take out Doomsday first. This trade paperback was valuable in filling in the gaps in my single issue collection. It's worth buying. The online debates about Doomsday just being a copy of the pre- Peter David Hulk raged for years after this story, as well as who was stronger in either comics universe. Let me just remind all the Marvelites out there: Doomsday would rip Hulk a new one. ;)

I liked this story

Published by Thriftbooks.com User , 18 years ago
Death of Superman was a great comic series. I was glad the day I found all the comics combined in one book. It sure did save me a lot of money. It was split into like 6 different comics.Death of Superman puts Superman up against a killing machine called Doomsday. Not much is known about the killer except for his love of destruction. He is destroying everything in his way and he's heading towards Metropolis.The Justice League of America goes into action to stop Doomsday. They fail in the process. He beats the mess out of most them. Some hold there own better than others, but Superman comes to the rescue of some of them.Once Superman starts fighting Doomsday it really picks up. It's some great drawing. Most of the shots are done in bigger squares and sometimes full pages of the comic. Mad props to all the artists and drawers who worked on this project.The final showdown in Metropolis is great. I love it when there punching each other so hard the shock is shattering all the windows. It's sad to see the big guy go down when he finally takes Doomsday out, but it was kind of nice to see him get beat. However, his death is short lived which is a great thing because Superman is the best ever.This book is definetly a must for all Superman fans.
Copyright © 2020 Thriftbooks.com Terms of Use | Privacy Policy | Do Not Sell My Personal Information | Accessibility Statement
ThriftBooks® and the ThriftBooks® logo are registered trademarks of Thrift Books Global, LLC