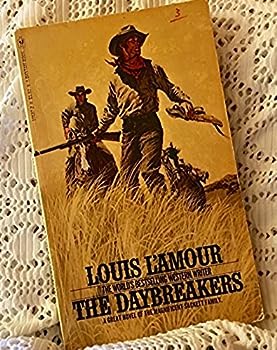 (Book #6 in the The Sacketts Box5 Series)

This description may be from another edition of this product. Louis L'Amour's classic novels of the West make for perfect Father's Day gifts Tyrel Sackett was born to trouble, but vowed to justice. After having to kill a man in Tennessee, he hit the trail west...

A Value.....At Twice The Price

Published by Thriftbooks.com User , 13 years ago
Part of a Special Centennial Edition series - which has two novels in one volume, with a retail cost of $4.99 each - the book features Orrin, Tyrel and William Tell Sackett, which is part of a 17-novel series of the epic story of a quintessential American family. The Daybreakers is a classic story on family, friends, betrayal and justice, as Orrin and Tyrel take different paths to bring peace and prosperity to a frontier town. William Tell's journey in Sackett develops much too quickly over the 151 pages, as he tries to construct a permanent settlement - and laws - to gold-rush territory. These editions are an excellent and inexpensive way to become acquainted to the story-telling techniques of Louis L'Amour. The purchase of all five books is comparable to or cheaper than the cost of one new hardbound.

Now this is a good one!

Published by Thriftbooks.com User , 19 years ago
This happens to be the first Louis Lamour that I have read, but from discussing it with other Lamour fans I have found that this book is one of his best. I really enjoyed it and although I am relatively new to his books (only 7 so far) it is probably my favorite. Lamour has opened the Western genre to me and I am now an avid western reader. This is definitely a good one to start with.

with the wind at my back and a day to kill

Published by Thriftbooks.com User , 20 years ago
I read The Daybreakers in one sitting and not since discovering Conrad,Asimov,and Vonnegut in high school had a book so strongly introduced me into a new genre of fiction. The Daybreakers is the best Sackett book I have read to date. With beautiful imagery of the new american west and thoughtful page devotion to its characters and setting. It has great gunfights and a quick-paced story to back them up. I now find myself as big a fan of the warm frontier years as I was of the cold sterile future. I recommend this book to anyone with enough time to give this great story.

A Great Tale of Our American Heritage

Published by Thriftbooks.com User , 22 years ago
This is a superb Western. It tells the story of our country's rise to greatness with the emergence of self-sufficient families who tamed a harsh wilderness. A glorious tale by America's best teller of tales. If you need a fix now Louis is gone, try Shane or Aymond.

An epic tale of family, hardship, and acheiving manhood.

Published by Thriftbooks.com User , 22 years ago
The Daybreakers is truly a western classic. It tells the tale of two brothers who find themselves alone heading west trying to find a better life for themselves and their family. Along the way they encounter battles from Indians, Renegades, Outlaws, Land-Grabbers, and the betrayel of a good friend. An adventure filled tale packed with gunsmoke, Spanish Haciendas, and the perfume of lovely senoritas. You will not be making a mistake with this one, a prime example of how action/adventure should be. Lamour is at his best with The Daybreakers.
Copyright © 2020 Thriftbooks.com Terms of Use | Privacy Policy | Do Not Sell My Personal Information | Accessibility Statement
ThriftBooks® and the ThriftBooks® logo are registered trademarks of Thrift Books Global, LLC