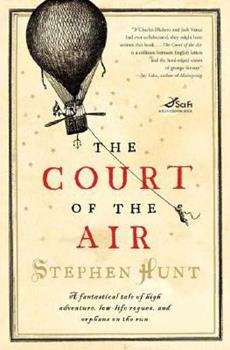 The Court of the Air (Jackelian World)

(Book #1 in the Jackelian Series)

When streetwise Molly Templar witnesses a brutal murder at the brothel she has recently been apprenticed to, her first instinct is to run back to the poorhouse where she grew up. But there she finds her fellow orphans butchered, and it slowly dawns on her that she was the real target of the attack. For Molly is a special little girl, and she carries a secret that marks her out for destruction by enemies of the state. Oliver Brooks has led a sheltered...

What a fun, exciting book!

Published by Thriftbooks.com User , 12 years ago
I trust reviewers more when they reveal their bias, so here's mine: I really like steampunk, and I REALLY like Stephen Hunt. "The Court of the Air" is a blast. It has so much going on that it's like Dickens on steroids: fantasy, magic, dirigibles, steam-driven machines,under-appreciated orphans, kind benefactors, corrupt officials, squalid living conditions, sentient mechanical beings, and so much imaginative mayhem that it's difficult to catch your breath at times. That's why I picked it off the shelf and, wow, did this deliver on those promises. Be prepared: there are those who complain about the "weight" of its imagination -- that it's TOO full of plot twists and story lines. You can't turn the page without encountering a new crisis or a betrayal or a revelation. Stephen Hunt is an author who doesn't believe in downtime...there is action on practically every page. Don't get me wrong: I can understand why some people make these complaints, but I'm not one of them. I've read all three of Hunt's novels in this series -- "The Court of the Air," "The Kingdom Beyond the Waves," and "The Rise of the Iron Moon" -- and I have absolutely LOVED them. I continually wonder how he will top the last page, or chapter, or even novel, and he hasn't disappointed me yet. It isn't essential you read these books in order, but it will help. There are a lot of intruiging and original characters in each novel, and a few have made it from one book to the next. One, Jared Black, makes an appearance in all three novels, and he is an absolute hoot. Hunt's a genius at fleshing out their personalities, and it makes for compelling storytelling. It's not just that they are unique species -- one's got an exoskeleton, for example, another's infected with a powerful magic, and another's blood is literally filled with microscopic gears -- but their unique makeup helps propel the story. I don't want to give away too much of the plot, and I hate reviewers who do. Suffice it to say there is are a couple of plucky orphans whose humdrum and paltry existences are suddenly shattered, and their ability to overcome to the deviousness of others drives the story along. As you might guess, their stories end up being instrumental to the success of the very societies that have previously victimized them, and this plays out in tremendously interesting ways. What is truly amazing about author Stephen Hunt is his imagination, and now that he has reached the midpoint of the six novels he has said he plans to write I can truly tell you he shows no signs of slowing down. And at the heart of every book lies the clever, vivid characterizations that drive the many threads of the story, Hunt has peopled each one with rich personalities, and you'll find it's hard to be indifferent to them -- each has a strength or weakness or quirk or power that fits the adventure his or her portion of the tale. More to the point, "The Court of the Air" creates a world in which anything can happ

Clever and engaging (although a little too much steam)

Published by Thriftbooks.com User , 13 years ago
I'm not a huge fan of the steampunk trend. At all. Despite that bias, I found just about everything about this book to be engaging: the characters, the universe, the plot (and plot twists), and the imagery. I felt that some of the political commentary was a little heavy-handed (and, corny... "communityist"?!), but the novelty of the rest more than made up for it. Overall, aspects of the book make it clear that the author has some more polishing to do before he starts turning out insta-classics, but I am looking quite forward to reading his next book.

A fantastical tale of high adventure, low-life rogues, and orphans on the run...

Published by Thriftbooks.com User , 13 years ago
While many reviewers are quite verbose and almost give away the whole story, I just want you to know this is Harry Potter for grownups. This is good fighting against evil but, it takes a little while to realize who is who. Previous reviewers refer to the Dickensian nature of the story, it is there in the poor orphan girl, Molly, and the seemingly orphaned boy, aptly named Oliver, along with the above ground settings. Yes, much happens underground and in deserts, mountain castles, remote prisons. There are nameless creatures that at first you want to fear but, then pity. Filled with mechanical computers, psychic powers, hot air balloons, double crosses, spies, lies, mind control, guns whose ammo comes from plants, steam powered robots with souls, a super villain trying to bring back the ultimate evil, battle scenes, and of course the ultimate 'Big Brother' for which the story is name "The Court of the Air". The Court of the Air Once you are hooked this book is very hard to put down. I personally look forward to the next installments. The Kingdom Beyond the Waves The Rise of the Iron Moon

The Citizen Kane of Steampunk/Political/Fantasy/Adventure novels

Published by Thriftbooks.com User , 13 years ago
This is the best adventure novel I've read. If you dig steam-powered robots, you'll dig this book.

"They think they are riding a tiger, but the tiger is riding them."

Published by Thriftbooks.com User , 13 years ago
I am in full agreement with science fiction writer Jay Lake when he described The Court of the Air as being a cross between Jack Vance and Charles Dickens. It is basically a steampunk novel with swords and sorcery. What makes it different is its setting. Instead of taking place during the Victorian Era, it is set in a far future in which several civilizations (our own included) have collapsed and others have taken their place. A phase transition has rendered electronics useless; making virtually everything steam powered, with the exception of transaction engines (supercomputers) and other more complex machinery that utilize crystals. Adding to that, magic (or remnants of a superscience that appears to be magic) is commonplace. Yet the world in most ways seems to be firmly entrenched in the 19th Century with its hansom carts, penny dreadfuls, and labor-management disputes. Most of the story takes place in a nation called Jackals, which bears a very close resemblance to England. There are two orphaned young protagonists that the story alternates between. The first being young outcast Oliver Brooks, who lives with his uncle because his parents died in an accident in which his own survival resulted in his social stigma. When his uncle and their housekeeper are murdered, Oliver is framed for the crimes. His only ally is a government agent named Harry Staves, who might be as untrustworthy as the murderers pursuing him. The second is Molly Templar, whose disposition is as fiery as her red hair. She is a poorhouse ward who loses every job that she is assigned to until she is apprenticed into prostitution. Of all the dumb luck, her first customer is paid a monumental fortune to kill her. She is able to barely escape, but her luck is not shared by the children of the poorhouse to whom she regards as her family. Both of these orphans seem to be insignicant and powerless against the vast conspiracy that seeks to destroy them, but they soon learn about the incredible world saving power that they contain that levels the playing field so to speak. There are a lot of interesting things going on in this book. One of which is how much of the history of Jackals is dealt with. They have a parliamentary government in which royalty are mere figureheads and scapegoats if public approval is low, thanks to a revolt that echoes Oliver Cromwell. In fact, once a Jackelian prince goes through the coronation process to become king, he has to have his arms amputated so he can no longer "raise his arms against the people". There is also a political philosophy called Carlism that is much like Communism due to its disdain toward religion and the wealthy. Here some devotees take its tenets to rather macabre extremes such as taking a bright child and turning him into a drooling vegetable so he will be "equalized" and no better than anyone else. Basically, people are liberated from being themselves. Furthermore the book is fantastic in addressing how corrup
Trustpilot
Copyright © 2022 Thriftbooks.com Terms of Use | Privacy Policy | Do Not Sell or Share My Personal Information | Accessibility Statement
ThriftBooks® and the ThriftBooks® logo are registered trademarks of Thrift Books Global, LLC