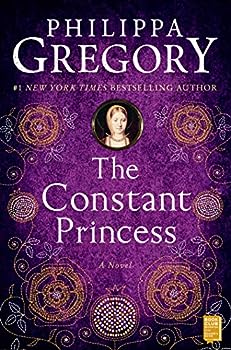 The Constant Princess (The Plantagenet and Tudor Novels)

From #1 New York Times bestselling author and "queen of royal fiction" (USA TODAY) Philippa Gregory comes the remarkable story of Katherine of Aragon, Princess of Spain, daughter of two great... This description may be from another edition of this product.

Published by Suze , 6 months ago
I liked all I learned in this historical fiction novel but the actual story was kind of repetitive. I do look forward to reading the series. All in all it was very interesting to me. Katherine is an admirable figure, for sure!

Published by Samantha , 2 years ago
The growth of Queen Katherine is spectacular.

Published by Thriftbooks.com User , 15 years ago
Well written. A very interesting way to learn the history of England and it's monarchy and still enjoy the experience. I am now reading the fourth book written about the royal families by Philippa Gregory and find them all very interesting. Each book stands on its own, yet if read in order, there is a sense of a continuaous historical information.

Published by Thriftbooks.com User , 15 years ago
I love Gregory's Tudor historical fiction (more than the others she has written). There isn't much about Catherine of Aragon, so this is very much appreciated.

Published by Thriftbooks.com User , 16 years ago
I expected this book to be dull and dry, certainly the subject matter has been treated in boring style before. I bought the book on a whim. What a delightful surprise. Gregory writes in an enchanting adagio of narration and first person singular. The italics are, of course, Catalina's memories of how things occured, and the bold print is the author's tale as history knows it to have been. Catalina, Infanta of Spain, daughter of the mighty Isabella and Ferdinand, is a warrior princess. I had no idea of this aspect of her nature, wherein she is usually portrayed as compliant and without a will of her own. Her courage, stubborness, and her sheer stamina in the face of a cold and uncaring royal circle is testament to her determination to remain in England as its rightful queen. From childhood her mother had groomed her for this one calling and she was going to rule England in her own right. That some historical facts as we learned them are played out as having been of Catalina's making is a refreshing twist. She took charge and changed facts as they suited the occasion. The last few pages are stunning and leave us at a point everyone familiar with Katherine's fate will remember with a chill. One hopes Gregory will write a part deux to the final years, but then again it is better not to try to improve on perfection.

Published by Thriftbooks.com User , 17 years ago
Even though I have found Philippa Gregory's Tudor series ("The Other Boleyn Girl;" "The Queen's Fool;" "The Virgin's Lover" & "The Constant Princess," to be excellent reads -- Gregory writes well and in an engaging manner -- I will have to admit that "The Queen's Fool" & "The Virgin's Lover" did not quite measure up (for me) to "The Other Boleyn Girl." I found those two books to be less emotionally engaging and a little less complex. Of course, this could well be because I'm not so partial to Elizabeth I. Whatever the reason, it was with relief that I found myself becoming totally involved and engaged with the plight of Catalina of Aragon as she circumvated her way through the treacherous English court politics of Henry VII. Catalina of Spain, youngest daughter of Ferdinand and Isabella of Spain, had been raised to believe fervently in her parents' causes (to unite all of Spain and make it a completely Christian country, and to create alliances with other Christian European countries that would enable them to beat back the Muslims) and to know her place in her parents schemes -- to marry the English Prince of Wales and become Queen of England, and to ensure England's help in her parents' crusade against the Muslims. But even though Catalina had anticipated that her life would not be a completely easy one (being so very far away from home and family, and feeling so completely alien in a foreign land), even she had not imagined how much pain, sorrow and heartache her life in England would be. Or just how tenacious she would have to be in order to ensure that she retained her rightful place. Soon after her arrival in England, Catalina finds herself married off to the young Prince of Wales, Arthur, who behaves both in a rather immature and rather resentful way towards her initially-- something that the princess of the blood finds difficult to endure. But just as things begin to look up for our princess, disaster strikes; and Catalina finds herself a widow with no secure place in the English court. As Catalina battles for her rightful place, she comes face to face, for the first time, with the petty cruelties of Henry VII, as well as the almost casual indifference of her own parents. And faces the bitter truth that she can only depend on herself to survive (a lesson that will help her in future times) . With her faith and her pride as her only props, Catalina stubbornly clings to her belief that she was born to be Queen of England -- something that keeps her going through her long hard years living on the fringes of Henry's court, until he finally dies and Arthur's younger, charming but lazy brother becomes king. Will Catalina's faith and tenacity finally pay off? I enjoyed Philippa Gregory's portrayal of the Princess of Aragon, warts and all. We see Catalina at her very best and at her worst -- her pride and her arrogance, her stubborn faith in her parents' manifestoes, refusing to see that her parents' claims were often at odds with their

Philippa does it again

Published by Thriftbooks.com User , 17 years ago
I picked up a reviewers copy of this book last week and was so excited, since I had loved The Other Boleyn Girl, The Queen's Fool and The Virgin Queen -- I was not disappointed. While The Other Boleyn Girl is still my favorite, this is a very close second; I love the way the author goes back and forth between third person and first person. It's also very interesting to learn the background of Katherine of Aragon before she was married to Henry VIII. I had felt so sorry for her and what she went through during the time of Anne Boleyn, and this sheds light on her life leading up to then. I highly recommend this book to anyone who enjoys historical fiction, and specifically 16th Century England.
Trustpilot
Copyright © 2022 Thriftbooks.com Terms of Use | Privacy Policy | Do Not Sell or Share My Personal Information | Accessibility Statement
ThriftBooks® and the ThriftBooks® logo are registered trademarks of Thrift Books Global, LLC