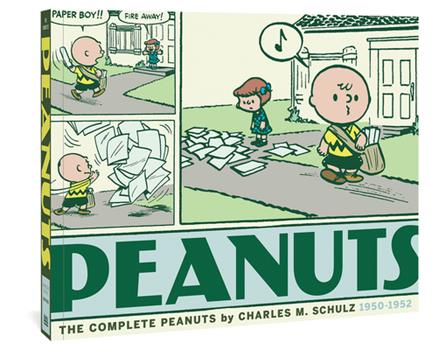 (Book #1 in the The Complete Peanuts Series)

The best-selling, award-winning, critically acclaimed series that sparked a renaissance for fans of classic comic strips upon its debut in 2004 is now coming in softcover! This first volume, covering the first two and a quarter years of the strip, features hundreds of strips rarely reprinted before this series. Three major cast members -- Schroeder, Lucy, and Linus -- initially show up as infants and only "grow" into their final "mature" selves as...

Published by Thriftbooks.com User , 17 years ago
When I was a child and knew few greater pleasures than reading a new Peanuts collection, I would look wistfully at the note on the cover -- such as "Selected cartoons from Ha Ha Herman, Charlie Brown Vol. 1" -- and wonder just where this mysterious book and all the rest of them were to be found. Not in any bookshop I ever visited, that's for sure. Then one day I borrowed a vast hardcover Peanuts collection from my local library and imagined that this was one of those rare "originals". It conjured up an image of a whole shelf of equally fine first editions going back to 1951. Years later I would occasionally re-read one of those old collections and think, "When I have lots of money I'll collect all of those original Peanuts books, and then at last I'll have every strip, in order, in an attractive sturdy hardcover." Then I found the Peanuts FAQ, which revealed that there were there thousands of strips that had never been printed in any book, and also that that library book was an anomaly: those mysterious "original" Peanuts books were only paperbacks, just as incomplete and (by now) yellow and tatty as the ones I used to buy. "Sigh", I said. But here it is, the fine first editions devoted Peanuts readers have always dreamed of but never expected to see: the first of a complete set containing every strip, beautifully presented, with original newspaper publication dates and even a fannish index pointing to such epochal moments as Lucy's first appearance and Snoopy's first thought. What's most surprising is how soon Peanuts began to become the Peanuts we remember. The early strips reprinted previously tended to foreground the "observational" humour, kids behaving like real kids. But now we can also see the early development of Schroeder as a child with adultlike interests and abilities, the seed from which the whole cast would eventually grow into thoughtful, eloquent child-adults. Another thing that is quickly apparent here is the quality of Schulz's writing right from the start. The art here isn't yet at its peak, and the strip doesn't have the sense of depth that it would later acquire, but Schulz always had perfect comic timing, the ability to say everything that needed to be said in a handful of words, or a single sigh.

The first step in a long journey

Published by Thriftbooks.com User , 18 years ago
If all of the Complete Peanuts volumes are this good, then Fantagraphics will stay in business forever. This first book is beautifully packaged (by semi-famous Canadian cartoonist Seth), with three daily strips per page. Sunday strips fill an entire page. The introduction is short and to-the-point. The essay after the final strip is very good; it explains why Peanuts became the most successful newspaper strip of all time. The books ends with a lengthy interview with Charles Schulz that goes a long way toward explaining what kind of person could create such a wonderfully sweet and sad comic every day for 50 years. Schulz was both ordinary and extraordinary at the same time, and his work reflects that contradiction.But the heart of the book is in the panels, of course. As you read, you get to see the Peanuts world grow. Schroeder and Linus are introduced as toddlers. Snoopy doesn't talk or think until the second year. (He doesn't do much except eat Charlie Brown's candy, either.) Violet pulls the football away from Charlie Brown before Lucy does. And so on. This book captures a comic strip world in its earliest stages, still forming. Even Schulz's drawing style grows from page to page, in very subtle ways.It's going to be hard to top this first volume. The early strips have a lot of historical value, and the extras are great. Five stars.

A Classic Legend and A Must Own!

Published by Thriftbooks.com User , 18 years ago
The incredible work that went into this amazing collection will take you back 50 years to the incomparable work of the beginning of Charles Schultz' creation of The Peanuts, a classic of cartoons that have become a loving and living legend in the hearts and minds of millions. The original comic strips have been preserved, and we are so fortunate to be able to enjoy this innocent and wonderful part of our culture in this and forthcoming volumes depicting each cartoon illustrated by Charles Schultz. This is definitely a collection that you will treasure, depicted in chronological order, and hard bound, it is a wonderful collection that can be enjoyed for generations. Highly Recommended for its value and for preserving the great characters that have touched so many lives. 10 Stars!

A long-awaited bundle of joy

Published by Thriftbooks.com User , 18 years ago
Fantagraphics deserves acclaim for this project: the archiving of one of the greatest comic strips of all time. Fans who have lamented the messiness and scattershot dating of prior Peanuts collections are well rewarded with this volume, the first in a long series. The production staff has shown thorough loving care in their design and their selections for paper and binding materials; the bright paper and spare design allow Schulz's early inking mastery to shine through. The editors are chose brilliant contextual materials as well; the long interview at the end of this book shows Schulz as sometimes cantankerous, protective of his art form, and justly proud and possessive of his creations, but of course equally warm and thoughtful. This book is an absolute must-have, and those of us who love Schulz's work are grateful for its arrival.

A loving tribute to a comics juggernaut

Published by Thriftbooks.com User , 18 years ago
I imagine most fans of Charles Shultz will not need a review to tell them that they need this book; unless Fantagraphics horribly dropped the ball, how could this not be a must-have. But in case you were wondering, I can assure you that The Complete Peanuts 1950-1952 is a marvelous start to what promises to be an amazing series of books.As has been mentioned before, the early strips of Peanuts are noticably different from the strip we've come to know and love. Luce and Schroder, for instance, are infants. But what I found remarkable was how much the humor and pathos of the later strip can be found even here. Charlie Brown, more mischevious then we're used to, still struggles with a world that just won't give him a break sometimes; in one strip that is vintage Shultz, Charlie Brown watches despondently as Patty, fighting with Shermy, calls him a Charlie Brown, at which point Shermy says she has gone too far.Snoopy is noticably different, a mere puppy, on all fours, but still obviously thinks of himself as more than a dog. Several strips involve him being offended when one of the children refers to his canine nature. We even get a brief glimpse of his imaginative abilities, as he fantasizes about making Charlie Brown do tricks for him.But what it all comes down to, though, is the question: are the early strips funny? My laughter reading through this volume would indicate yes. The humor is different, with reoccuring jokes about mud pies, for instance, seeming a bit dated and overly childish. But there is a lot of great material here. If this is Shultz just hitting his stride, the future volumes (as we all well know) are going to be brilliant.As for the presentation, the strips are rendered vividly, from high-quality proofs, and the book itself is a work of art. An introduction by Garrison Keillor isn't particulary illuminating, but an essay on the strip and its influence is a nice addition. But it is the lengthy interview with Charles Schultz, from the 1980s, which is the most exciting of the texts included. Schultz talks freely about his influences, the origins of Peanuts, and the state of comics today, among many topics covered. An index is included, which is both useful and amusing (including such categories as "Snoopy, wearing clothes, to disturbing effect").Thank you, Fantagraphics, for putting out this collection. I'm anxiously awaiting the next 24 volumes. 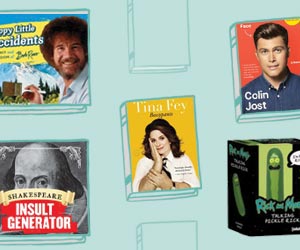 Choosing the perfect gifts for the diverse mix of people we know can be tricky. That's why in addition to our full gift guides, we're putting out a set of mini gift guides with recommendations for all the individuals in your life. Here are some of our favorite picks for our funny and comedy-loving friends.