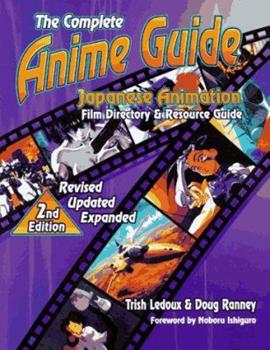 It's clear that Japanese animation, or anime, has established a lasting beachhead in American mass culture. "The Complete Anime Guide" serves as a chronicle, a directory, a resource and a guide book... This description may be from another edition of this product.

Published by Thriftbooks.com User , 24 years ago
The Complete Anime Guide is a very well made book which composes one of the best intro's I have read. The book goes in great depth from the very first re-writing the history of anime, which is very helpful for people starting off, or people who would like to learn more about the history of anime. Although it could now use an update, it has a very large number of anime titles which are currently available in the United States. The only two things I disgress about the book are a better made index, consisting of the anime titles alone, much like The Anime Movie Guide written by Helen Mcarthy. Another thing I dislike was the use of only American titles. I wanted to see many of Hayoa Miyazaki when it only included one. It is fairly brief in reviews, although it goes into depth mentioning each OVA which is very nice. It also gives slight background on a few words of japanese. I prefer to use this book to find out about a title briefly or to gather history from anime backgrounds.

A review of the 2nd edition of 'The Complete Anime Guide'

Published by Thriftbooks.com User , 24 years ago
As the title suggests `The Complete Anime Guide' is a `Japanese Animation Film Directory and Resource Guide,' or more specifically a comprehensive guide to Japanese Animation is currently available in America on domestic release videos. The Guide, co-written by Trish Ledoux, editor of the `Animerica' film guide magazine, far surpasses the 1st edition which was much criticised as being a glorified catalogue rather than a resource guide. Now in its second incarnation the Guide provides detailed information on each of the available Anime titles ranging from production data, release dates, to episode summaries and subjective comments. The Guide even provides a unique classification of Anime titles in the form of symbols to represent content for violence, nudity, comedy, profanity, etc..., on suitability of titles for specific audiences. In addition the Guide also has a comprehensive list of Anime publishing houses, distributors in America and even a list Anime Magazines. It even goes as far as to include URLS for Anime resources on the World Wide Web. The most interesting aspect of the Guide is the section written by Noboru Ishiguro, a mover in the field of anime, on his observations on the history of Animation in Japan and in America. The 2nd edition Guide is a must have for all anime fans, at least until the 3rd edition is released.

It's Animerica in book form!

Published by Thriftbooks.com User , 24 years ago
I read the first edition, which came out around 6 months to a year before the second edition. It combines a history of anime (with a slant towards American releases), a genre guide, the reviews from past issues of Animerica of titles released in the US, and a section on anime fandom. A fairly good reference for the beginning anime fan but not very in-depth. The "complete" part of the title is somewhat of a misnomer.
Trustpilot
Copyright © 2022 Thriftbooks.com Terms of Use | Privacy Policy | Do Not Sell My Personal Information | Cookie Preferences | Accessibility Statement
ThriftBooks® and the ThriftBooks® logo are registered trademarks of Thrift Books Global, LLC