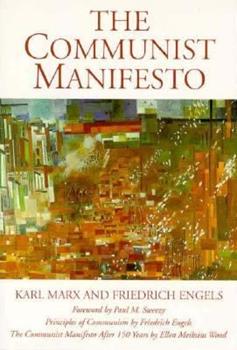 Published by Thriftbooks.com User , 12 years ago
Wow. Never in my life have I been able to get through Marx's alleged masterpiece, the Communist Manifesto. Until now. I have read excerpts, read commentaries and analysis on it, but this edition is absolutely the foundation for understanding this work. The on-page, paragraph by paragraph annotations are invaluable in comprehending as you go. Some of the utter shock of reading the Manifesto is to realize that it was published in 1848 and yet most of the ideas and assertions in it are as relevant to today's system of global capitalism as they were to 19th century Europe's. Scarier even, truly, is that Marx and Engels seemed to rather accurately predict the future of capitalism. If I can find an e-mail address or contact info for this edition's editor Phil Gasper, I'm going to thank him profusely for this book. If you've always been somewhat interested in this book, have wanted to read it but been put off by its style and and unfamiliar jargon, this is, without doubt, the version to read. It will open your eyes, you will find yourself, as I just did hours ago, howling expletives, incredulous at its insight and brilliance.

No Matter Where You Stand On Communism, Read This

Published by Thriftbooks.com User , 12 years ago
Wherever you stand on the topic of Communism, you should read this book. In the Manifesto, Marx outlines exactly what Communists stand for and what they want government to be. It is a very simple and short book, intended to be a pamphlet easily understood by the masses. As mentioned above, wherever you stand on Communism, you will get something out of this book. Whether it confirms what you feel, makes you question your beliefs, or makes you wonder about things you have not wondered about before, the Communist Manifesto will do something for you. Communism is certainly one of the most misunderstood words in America. It is used as a swear word in many cases, "He's a commie!" If everyone were to read this book, it would eliminate much of the ignorance that plagues the modern world. Personally, I am not to fond of Communism in history, but I think that certain aspects of Communism are very applicable to today's society. I think that many people would share that opinion, if they would only just honestly examine communism straight from the source, The Communist Manifesto. One final word about the Communist Manifesto; I do not own this version of it. My version was loaded with introductions, footnotes, and end notes. The actual Manifesto only comprised a small portion of the thickness of the book. I assume that it will be the same wonderful story with this publication.

It's such a good version...I would even recommend it to a skeptic

A work of historic significance

Published by Thriftbooks.com User , 21 years ago
I remember reading the Communist Manifesto thirty years ago when I was at University. At the time it seemed tedious and impenetrable. Recently I re-read it and was amazed at how clear it seemed and what an effective piece of propaganda it was and how clear was the writing.Reading through the program one realises the distance that has been travelled since it was written. Some of the major planks are the Abolition of Child Labour, the creation of a progressive income tax and Free Education. Perhaps one of its major weaknesses is that Marx was a person who tended to carry a grudge. Thus a third of it is devoted to attacks on some of his contemporary enemies and rivals. These disputes have so long passed into history they are incomprehensible.The modern notion of Communism of course stems not from Marx but from Stalin and Lenin. Marx wrote at a time when the only democratic country in Europe was France. England, Germany and the Austro-Hungarian Empire all had limited franchises and Russia was of course an autocracy. One of the major reforms he battled for was the introduction of democracy. It was his belief that the implementation of his program would flow from that. Following Marx's death his movement evolved into a parliamentary movement the Social Democratic Party. Communism as a modern political phenomena dates from 1917 when splinter Social Democrats followed Russia's lead and developed small conspiratorial parties who were committed to the seizure of power by force. Stalinism is an offshoot of this system and is a form of state terror aimed at ensuring the survival of unpopular anti democratic regimes. Reading through the Manifesto one can see the basis of a system which was not only an effective for mobilising political movements, but came to influence intellectual debate for the next century. There is also perhaps a sense of a naive optimism which could not contemplate the sorts of disasters which were to occur over the next hundred years.
Copyright © 2022 Thriftbooks.com Terms of Use | Privacy Policy | Do Not Sell My Personal Information | Accessibility Statement
ThriftBooks® and the ThriftBooks® logo are registered trademarks of Thrift Books Global, LLC