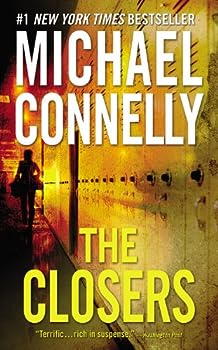 In this #1 New York Times bestseller, Detective Harry Bosch joins LA's elite Open/Unsolved Unit to help piece together the mysterious death of a teenage girl. He walked away from the job three years... This description may be from another edition of this product.

Published by Thriftbooks.com User , 16 years ago
Having only read one other Michael Connelly book, I really didn't know what to expect so I went into this one with an open mind. The main character is Harry Bosch, a formerly retired homicide detective who's brought back into the force to help with the "Open Unsolved Unit" of the Los Angeles police department. Open-Unsolved is another name for "cold cases." Before I get into this review, let me start by saying that this kind of story is a personal favorite. Bosch is assigned a case where a DNA sample from 20 years ago has a "cold hit" in a murder case. However, the person it matches to, seems to have little to do with the case. Slowly but surely, the case unravels into a fast-paced mystery thriller. The story is written so well, that you literally feel like you're looking over the shoulder of Bosch during the entire investigation. What's more, in addition to a great plot, the character development is simply excellent. You find yourself feeling an incredible amount of empathy for the victim's family. There's a ton of red herring thrown into the plot to make the murder mystery all the more complex, yet all the more satisfying. Hats off to Connelly for writing a modern classic!

Published by Thriftbooks.com User , 17 years ago
This is the best Harry Bosch novel in some time and that's saying a great deal. Michael Connelly is a great writer, and as other reviewers have mentioned, has gone back to the basics and the 'core' of Harry Bosch. This book clearly deserves five stars. That said, the early pages of this book reminded me of T. Jefferson Parker's, 'California Girl', an absolutely sensational book. As good as 'The Closers' is, 'California Girl' is the better book - it just doesn't have the great Harry Bosch.

Published by Thriftbooks.com User , 17 years ago
Once again, Michael Connelly has caused me to lose sleep. If I open one of his books, I don't rest until it's done. And I've never regretted the sleep deprivation! The Closers reinforces the reader's belief in Harry Bosch, reunited with Kiz Rider, and their dedication to the victims of murder, regardless of their age at death. Letting the chips fall where they may is a brave stance and the only modus operandi when Bosch is involved. My advise, start at the beginning of Connelly's career as a novelist and ride along with Connelly as he develops one of the most incredible law enforcement characters ever!

Published by Thriftbooks.com User , 17 years ago
This was my favorite Bosch novel in a long time. From start to finish the book evidences Mr. Connelly's respect for pure police work untainted by political and personal considerations. Chief Bratton has clearly made a positive impact on our author. As a character, Harry Bosch had been kind of drifting--I am glad to welcome him back. This book is the finest example of a police procedural. It touches on all the major policing issues of the day, local use of the Patriot Act, the "CSI" effect, various social issues, attention to unsolved cases, increased expectations of officers, and still remains faithful to the predecessor works. Granted, you have to know the prior works to fully appreciate the involvement of Deputy Chief Irving and Bosch's newfound peace with his situation but Connelly's plot is rich enough to carry the entire work without the need for Bosch's usual internal conflicts. Besides, I'm sure that Bosch will run into trouble again soon--L.A. has a new mayor and nobody knows what he really believes or what he really stands for (other than re-election. The masters make their work appear effortless--this work takes Connelly and Bosch to new heights. Do not expect to put it down until you are finished.
Trustpilot
Copyright © 2022 Thriftbooks.com Terms of Use | Privacy Policy | Do Not Sell or Share My Personal Information | Accessibility Statement
ThriftBooks® and the ThriftBooks® logo are registered trademarks of Thrift Books Global, LLC