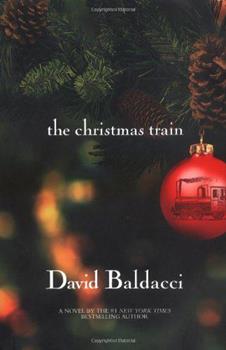 A journalist embarks on a cross-country train ride at Christmas--a journey that will lead him into the rugged terrain of his own heart--in this New York Times bestselling holiday tale, now a Hallmark... This description may be from another edition of this product.

Published by Thriftbooks.com User , 16 years ago
Bestselling author David Baldacci is writer of The Christmas Train. This holiday classic tale tells the story of journalist Tom Langdon, and his memorable cross country adventure. Tom must get from Washington D.C to LA in time for Christmas. However, Tom is forced to take the train because of a slight mishap at the airport. He takes a journey through self discovery, and rediscovers the essential goodness of people. The Christmas train is an unforgettable story that shows during the season of miracles, deepest hopes and dreams can be fulfilled through second chances. The story of Tom Langdon in The Christmas Train is a must read for train enthusiast and adventurer s. It captures the essence of strong emotion and will take readers through a gripping journey and disbelief. The Christmas train is filled with heartwarming dynamic characters. They are relatable and deeply sentimental figures. Once again Baldacci has created a plot that is morally uplifting and engaging to read. Tom Langdon is the character The Christmas train is an absolutely compelling story. It is a truly a book not worth putting down. Baldacci's novel is a story unlike any other, and is highly recommended for the holiday season!

Merry Christmas to all and to all a Good Read!

Published by Thriftbooks.com User , 18 years ago
I have always wanted to travel across the country by train and I love the Christmas season, so this book was an absolute joy to read. It is filled with plenty of simple "feel good" moments. It is warm and filled with the true spirit of Christmas. The story offers something for all readers. It has mystery, romance and a sense of adventure. This would make a great Christmas movie.

Published by Thriftbooks.com User , 20 years ago
We all have things we enjoy at Christmas - watching a particular Christmas movie, decorating a tree or other traditions. Reading The Christmas Train will be one addition to my Christmas traditions that will truly put me "in the mood" for Christmas. The story is wonderfully told, with likable, realistic characters that become dear and familiar by the end of the book, with action, humor, mystery, suspense, and tears that kept me completely enthralled from the beginning of the book to its stunning end. Some books you can predict what will happen next. Not this one! Though the reader may have hopes for what will happen next, there are no guarantees, and there are many wonderful surprises in store! Tom Langdon, an investigative reporter who has covered wars, won 2 Pulitzer prizes and has reverted to writing fluff because he is so depressed about not being able to change the world for the better, has decided to take a train trip across the U.S. to fulfill one of his dead father's requests, and to meet his girlfriend Lelia in LA. Tom doesn't really love Lelia; he just has found a comfortable companionship with her - they don't even live together, they just see each other every now and then. Tom's true love, Eleanor (Ellie), has been lost to him some years ago, and Tom isn't really sure what happened between the two of them - he just knows that not marrying Ellie was the worst mistake of his life. Imagine his surprise, then, to discover that Eleanor is on the same train as he is, working as a film writer for Max Powers, a very successful movie director. When Max and Tom bump into one another, Max has a great idea - he suggests that Tom and Eleanor work on writing the "train movie" together. Eleanor wants no part of it, but Max Powers always gets his way! Then the train becomes trapped by an avalanche, and there is such a severe winter storm going on that the more than 300 passengers worry what will happen when the train's fuel and food runs out. Who will rescue the trapped train and all the people traveling with it? An excellent, excellent holiday (or anytime) read, full of love, hope, good cheer, and miracles.

A Trip Across America Becomes A Journey Of The Heart

Published by Thriftbooks.com User , 20 years ago
Tom Langdon, a globetrotting journalist and Pulitzer Prize winner, is forced by circumstances to take a transcontinental trip aboard Amtrak to meet his current girlfriend Lelia Gibson in LA for the Christmas holidays. Tom's family connection to Mark Twain had inspired him to become a writer, and according to legend, Twain had taken a similar trip with the intent of writing a story based on his encounters across the country. Thus, Tom decides to use this trip to write the story Twain had never completed and fulfill one of the last requests of his father before his death. Always in the background of Tom's consciousness is what he now regards as the major mistake of his life, that he never proposed to his true love and fellow foreign correspondent Eleanor Carter, with whom he has now lost touch but still cares for deeply.The first section of the book consists of the segment of the journey from DC to Chicago aboard The Capitol Limited. Readers are introduced to the major characters and the outline of the limited plot and interrelated mysteries become clear. We also get a lesson in intercity train travel and learn that this will be a combination holiday story, romance and mystery as well as an advertisement for Amtrak and the joys of leisurely travel and seeing America rather than overflying the country to simply speed to your destination. We meet the eccentric Agnes Jo, who Tom believes is hiding some secret: Steve and Julie, who are planning a marriage on the train since their parents disapprove of their relationship; Amtrak employee stalwarts Regina and Tyrone, and numerous other characters where it is not clear who has a bit part and who is central to the plot. But on a train you have time to get to know all of them.The second section of the book consists of the trip aboard The Southwest Chief from Chicago to LA. Here the plot thickens, the action quickens, the mystery deepens, and the passengers and crew are threatened by potential tragedy. My use of stereotypes in my description is intentional; Baldacci cleverly uses stereotypical characters such as Lelia, the actress whose fame derives from her role as the voice of Cuppy the Beaver, Gordon Merryweather, the despicable class action attorney who soon gets his comeuppance and Max Price, the famous movie director who is accummulating material for his next epic involving train travel, to quickly get us involved with the story without the necessity for a lot of background. At the same time he lets us know that this will be a fun trip of the sort many of his readers have probably dreamed about taking.All the usual adjectives apply - heartwarming, charming, schmaltzy, romantic and just plain fun. It is a very fast read, a great story for a long afternoon or evening in front of a Christmas fireplace or a short trip; ironically much too brief for a long train ride but about right for a high speed Acela ride between NYC and DC or Boston. This book, along with WISH YOU WELL, shows the versatility of the au
Trustpilot
Copyright © 2022 Thriftbooks.com Terms of Use | Privacy Policy | Do Not Sell My Personal Information | Cookie Preferences | Accessibility Statement
ThriftBooks® and the ThriftBooks® logo are registered trademarks of Thrift Books Global, LLC