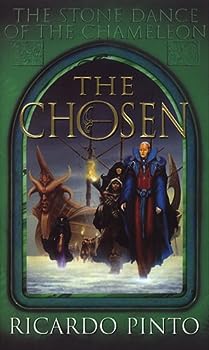 The Chosen (Stone Dance Of The Chameleon)

Young Carnelian has spent his entire life alone with his father, who years ago rejected the savage cruelty of the Masters of Osrakum and was sent into exile. But now a ship has come flying through the... This description may be from another edition of this product.

An unforgiving and unrelenting book

Published by Thriftbooks.com User , 16 years ago
This book was actually a gift from a very good friend. Since I happen to trust his taste completely, I started it on the same day. Several hours later I emerged with my heart at my throat and utterly overwhelmed. I can say with all sincerity that I hold this book as one of the best I've read all year and for someone who reads an average of two/three books per week, (On a regular school schedule) this certainly means something. My opinion is obviously my own, and not everyone shares it, but labeling a book as bad just because one didn't enjoy it, will only keep people who read these reviews from buying something that theyt might really love. I happened to like the detailed descriptions, as an artist I could practically breathe Ricardo Pinto's world, and I certainly drowned in the crushing helplessness. I'm not a masochist by far, so I'd like to think that helplessness was how Carnelian felt during every cruel situation he couldn't help. So far, with the exception of a few, most reviewers have agreed that the book is too descriptive, and even boring. I do admit that action and to a lesser degree, plot, were sacrificed for detail, but the result is one of the most vivid worlds I've experienced through the eyes of an author. I find this refreshing. Some expressed distress at the homosexual overtones, (as little as there was of that) and that just baffles me. If homosexuals can read books with blatant heterosexual situations, and relate to those to a certain extent, what is stopping heterosexuals from doing the same? Is the ability to see, and feel outside our normal sphere of existence something only a privileged few posses? :p Anyways, I think this book is one of those things that not everyone can read, not the way the author meant it to be read. I'd like to think that I see the world of the Masters in the same light as Ricardo Pinto, or that at least, I've managed to glean some insight that'll guide me through the second book of the trilogy, which I'm currently reading.

Not your usual epic.

Published by Thriftbooks.com User , 20 years ago
I happen to really like this book. One, it's extremely original I think. Not your normal epic adventure. The world where this takes place is extremely strange indeed, full of creatures that are human like but not quite human(and it is never revealed exactly how they came about, etc. The reader knows as much as the poor, hapless main character.)The civilization itself is rather unique and more then a bit disturbing. Where one caste(the Chosen) are absolute rulers, almost gods. It goes so far that they must where masks in public, for if any of the 'lesser' people see them unmasked, they are condemned to die by the 'Law which must be obeyed'.There are many many other intricicy's in this book, especially involving the culture and civilization. Some people may be put off by the sheer complexity or the violence of it. But it's all part of the feel of the book. You ask yourself, 'could people really get like that? Could they be convinced to believe in what the characters in the book believe?'I am looking forward to learning more about this world. Many possiblities of it's past come to mind..and I'd really like to confirm some of them. Warning though, the way it ended might be a little frustrating. Jeez, there should be a law about leaving your characters in that kind of situation!!I will concede, some people may be repelled by the homoerotisim...I believe that's the term used in another review. But it's only near the end of the book, and isn't excessive. I've got to say, no one complains about when a guy and girl make love in various fantasy epics that I've read, it's almost a standard plot device.Also, I liked that the main character isn't completely clueless like most of his epic fantasy main character brethen are(Garion for example ^^;).So just read it, it doesn't suffer from cliche syndrome or the stalk character plague. Quite unlike half of the other fantasy epics out there.

Published by Thriftbooks.com User , 21 years ago
I am a voracious reader and it's been a LONG time since I've read anything in the sci-fi/fantasy genre that is truly unique. The writing is superb - the world created is totally different, ritualistic, and fascinating. The same-sex relationship in the book does not detract from the story - even for those of us that are not oriented that way. The writing and the story are gripping!

Published by Thriftbooks.com User , 21 years ago
Yes this book is complex. But world building must necessarily be so. This world is alien-- in culture, in social strata, in the beasts (including humans) that dwell there. But isn't that in fact what makes fantasy so compelling? I found the descriptive passages engrossing and was able to satisfy my "creature" fix, something I absolutely must have. I found this world utterly unique and I highly recommend you go there.

Published by Thriftbooks.com User , 21 years ago
This is the kind of book that makes you want to worship the writer. How does Ricardo Pinto take fantasy, with all its tired, old devices and conceits, and turn it into something so lovely that it defies description? THE CHOSEN is by far the best book I've read in over a year. If you like Gene Wolfe's Urth cycle, Mervyn Peake, Paul McAuley's Confluence series, and other such stuff, you'll adore this one. I think the cultural influences Pinto weaves in are Japanese, Mayan, and Egyptian. The elaborate rituals and ornate settings are hypnotically described, and the characters are flawless. My only complaint is the terrifying ending. I am obsessed! I need to know what happens!
Copyright © 2022 Thriftbooks.com Terms of Use | Privacy Policy | Do Not Sell My Personal Information | Accessibility Statement
ThriftBooks® and the ThriftBooks® logo are registered trademarks of Thrift Books Global, LLC