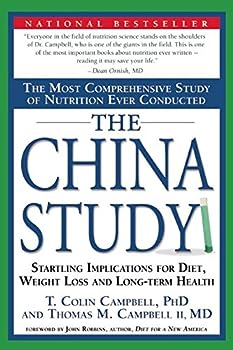 The China Study: The Most Comprehensive Study of Nutrition Ever Conducted And the Startling Implications for Diet, Weight Loss, And Long-term Health

The revised and expanded edition of the bestseller that changed millions of lives The science is clear. The results are unmistakable. You can dramatically reduce your risk of cancer, heart disease,... This description may be from another edition of this product.

The best literature ever written

Published by David D. , 23 days ago
Everyone deserves the right to understand the facts behind animal products and their effect on our health. Dr. Campbell and his team lay out the facts about big pharma and our government. This book is an eye-opener and a life changer. After reading this book, my wife and I both became vegan. Thank you, Dr. Campbell, for sharing your knowledge.

Convinced me to eat plant base

Published by Rich Steinmetz , 1 year ago
This book was recommended by my Family Doctor who switched to vegan several years ago. The writing is OK, but not great. There are some jumps from what they say in one chapter is suddenly different in the next without an explanation. The last part of the book is pushing the vegan religion saying don’t eat meat or in anyway support the meat industry. I am not a vegan but I. now eat a pure plant base diet. I still wear leather shoes and a leather belt. I don’t yell at people for eating a hamburger or eggs The problem with this book and all diet books is that they all use the same charts. Heart disease and cancers started increasing in the US in the 1940s and have gone straight up since then. The grain industry says it’s due to meat/fat, the meat and dairy industry says it’s due to grains and carbohydrates. I’ll save you the effort of reading this book. Humans evolved over thousands of years on a plant base diet. Go back to plants, fruit and vegetables. Avoid ALL processed foods. Not in the book but if want to eat a piece of meat, then go for it, but limit meat consumption to one meal a week.

Published by Thriftbooks.com User , 4 years ago
I watched a debate between the author and another scientist and Campbell said his research and science was not complete and that a lot of assumptions were made.
Published by Thriftbooks.com User , 6 years ago
This is an Amazing book. I have changed many people's lives and health by gifting it. For those who actually read it, listened to my health changes and implemented it themselves it has made a Phenomenal difference. I would never go back to eating innocent animals and their by products=dairy. My body is NOT a walking graveyard. Dairy is poison to the human body. I feel Amazing and I eat lots and lots of great tasting vegan food and my body is still improving daily. I wake up with no aches and pains. This Book is A Life Changer-for the Better! "The Starch Solution" by Dr John Mcdougall and "How Not to die" by Dr. Michael Gregger are great books to follow reading after reading The China Study.

Published by Thriftbooks.com User , 16 years ago
On January 21, 2006, the day I started eating according to guidelines given in The China Study, I was 63 years old, 5 feet 10 1/2 inches tall, weighed 213 pounds and with a BMI of 130 was on the first rung of being obese, even though I did not look it. The first week I lost 5 pounds, the 2nd 5 pounds, the 3rd five pounds, the 4th 4 pounds, then 3, 2, 1, until I lost 35 pounds in about 3 months and then stabilized at about 178 pounds. My blood pressure went from an average of 141 over 91 to an average of 120 over 81. My total cholesterol went from over 200 to 127. I no longer feel that I am on a slow decline from 50 years onward, but feel happy and alive now. Much like when I was a kid. Today is August 22, 2006 and I know that this will be the way I eat and live for the duration. For me it's a matter of survival, physically and spiritually. I have given over 20 copies of the book to people I care about, including a waitress at an Outback Steakhouse in Virginia. It was May; she was worrying about her dad and wanted to get him something for Father's Day. By the way steakhouses are a great place to get real yummy vegetables. This is my true story. By the way, thank you Dr. Campbell and Thomas Campbell.

Published by Thriftbooks.com User , 17 years ago
This is a fantastic book that's loaded with so much eye opening information, it's the kind of book that I'll read again. I feel if you don't convert to a whole food plant based diet after reading this book, I don't think anything in the world will convince you....the evidence is just overwhelming. As for my story, I was on statins for high cholesterol for over 6 years....and a moderate to high dose at that. Over the years, my cholesterol kept rising gradually and my total cholesterol was just over 300 and a triglyceride level in the mid 200's without statins. The moderate/high dose statin brought my cholesterol down to the range of high 190's to low 200's. Over the years, I tried to get off the medication and I was told to try to eat a low fat diet, don't eat shrimp, lobster, etc. I went off the statins, tried this diet for several months and none of this helped....actually my cholesterol went higher....I was told it's hereditary, there's nothing you can do, and I should take the statin and that I would be on them indefinitely. Well, after reading the book "The China Study", there's a few paragraphs tucked in this great book mentioning that the major factor causing high cholesterol is eating any animal protein. The only meat I ate at the time was fish and chicken and small portions of it....and maybe beef a few times a year, if that. I have to say I was skeptical and figured what do I have to lose, so I went on a whole food plant based diet (vegan diet)as Dr. Campbell in the book suggests. I started that last November (same time I stopped taking the statins), and I had my cholesterol checked this past summer and was stunned at the result....my total cholesterol went from over 300 without statins, high 190's/low 200's on moderate/high does statin, to 175 without statins on Vegan diet, with good LDL and HDL. I'm guessing next time it's checked it will be even lower. Also, my triglycerides went from the mid 200's to 64! All as a result of just giving up animal products....amazing. Now I wonder....why wasn't I ever given this option by the doctor's I've seen over the years? Even if a person doesn't want to give up animal products completely as I have, why isn't this advice offered as at least an option to a patient.....and let the patient decide? What a concept! Of course, I feel my cholesterol and triglycerides levels are just the tip of the iceberg on how my health has improved on a plant based diet....the only regret?....I wish I started the vegan diet earlier....I never have had so much energy and just downright have never felt so good....seriously...this is not an overstatement. As to all the doubters out there with harsh reviews, I say to each is own but ignore the evidence at your own risk. I've seen many of my friends and family sick by what I feel this book has proven by many studies to be nothing more than a bad diet for the most part and most of them are looking for a magic pill to save them....and the old standby argument that it's a

Every doctor, teacher and parent needs to read this book!

Published by Thriftbooks.com User , 18 years ago
T. Colin Campbell has made a career of challenging the conventional wisdom around nutrition, and this book is the culmination of his work. His integrity, brilliance, and unflinching courage shine through every page. The main point of this book is that most nutritional studies that we hear about in the media are poorly constructed because of what the author terms "scientific reductionism." That is, they attempt to pin down the effects of a single nutrient in isolation from all other aspects of diet and lifestyle. While this is the "gold standard" for clinical trials in the pharmaceutical world, it just doesn't work when it comes to nutrition. Given that the Western diet is extremely high fat and high protein compared to most of the rest of the world, studies that examine slight variations in this diet (i.e., adding a few grams of fiber or substituting skim milk for full fat milk) are like comparing the mortality rates of people who smoke five packs of cigarettes a day vs. people who smoke only 97 cigarettes a day. Campbell's research, which he describes in a very accessible and engaging fashion, has two tremendous advantages over the typical nutritional study. First, there is the China Study itself - a massive series of snapshots of the relationship between diet and disease in over 100 villages all over China. The rates of disease differ greatly from region to region, and Campbell and his research partners (including some of the most distinguished scholars and epidemiologists in the world) carefully correlated these differences with the varying diets of the communities. It's not lazy "survey research" either - the researchers don't rely on their subjects' memory to determine what they ate and drank. The researchers also observed shopping patterns and took blood samples to cross-validate all the data. The second amazing part of Campbell's research method is his refusal to accept any finding without taking it back to his lab and finding out how exactly it works. In other words, we discover in The China Study not only in what way, but precisely how, the foods we eat can either promote or compromise our health. The book is part intellectual biography / hero's journey (although Campbell is always wonderfully humble - there's no trace of self-congratulation, just a deep gratitude for what he has experienced), part nutrition guide (the most honest and unflinching one you'll ever read), and part expose. The final section leaves no sacred cow standing, and names names! From the food industry, to the government, to academia, Campbell calmly reports on a coverup of nutritional truth so widespread and insidious that all citizens should be enraged. I have a PhD in health education and a Masters in Public Health - and I can honestly say that no book has shaken my worldview like this one. Anyone interested in health - their own, or that of their family, friends, or community - must read this book and share it. Campbell has started a revolu
Trustpilot
Copyright © 2022 Thriftbooks.com Terms of Use | Privacy Policy | Do Not Sell My Personal Information | Cookie Preferences | Accessibility Statement
ThriftBooks® and the ThriftBooks® logo are registered trademarks of Thrift Books Global, LLC