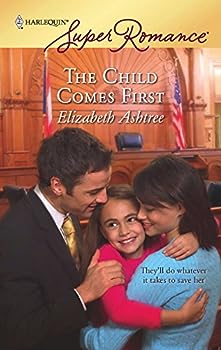 This description may be from another edition of this product. Trial attorney Simon Montgomery rarely loses a case. But when an eleven-year-old girl stands accused of murder, the courtroom superstar faces his toughest challenge. The child's social worker, Jayda...

An Escape From Reality

Published by Thriftbooks.com User , 13 years ago
I am the first to admit that Romance is not normally my genre. But for my recent birthday, I friend sent me 4 romance novels. I sort of raised my eyebrows at them in surprise, and thought, "Hey, give them a try. You need some fun, easy, and relaxing right now." (Things are quite stressful at the moment.) So I did. THE CHILD COMES FIRST, by Elizabeth Ashtree, was the first of the four that I picked up. And I am actually quite delighted that I did. I enjoyed THE CHILD COMES FIRST quite a lot. THE CHILD COMES FIRST is the story of a successful lawyer, Simon Montgomery; his pro-bono client, 11 year old Tiffany Thompson; and Jayda Kavanaugh, Tiffany's social worker. Young Tiffany, who has been in foster care for most of her life, is accused of murdering a younger child with whom she shared a foster home, and she is being tried as an adult. Jayda fully believes Tiffany innocence, and is determined that Tiffany be acquitted. Simon, who is on the fast track to partner in his prestigious law firm, agrees to represent Tiffany, but has his doubts about winning this particular case. The story continues on in a somewhat predictable, but comforting fashion: all of the key players have secrets that must be reveled and problems to overcome, but in the end, everyone lives happily ever after. I quite liked the voice and pacing of this book. About 300 pages long, I read it straight through in approximately 3 hours. I was surprisingly drawn into the story and these characters' lives. While I would not characterize this as a "page turner" or a "thriller," I did want to know what happened next, and could not put it down. That in itself is a testament to the author's talent and style. THE CHILD COMES FIRST is a nice, short vacation, the kind where you get to worry about someone else's problems for awhile, instead of your own, and you always know that it will all come out right in the end. And everyone needs that kind of escape sometimes.

Published by Thriftbooks.com User , 13 years ago
In Baltimore, the state accuses eleven-year-old Tiffany Thompson of willfully killing three-year-old Derek Baldridge. The Third Circuit Court judge ruled that the preadolescent will be tried as an adult because of the shocking homicide and the accused documented history of violence. Attorney Simon Montgomery is assigned the pro bono case in which a public defender failed to get the venue changed back to Juvenile Court. Other court rulings handled poorly by his predecessor further hampers his ability to mount a strong defense Meanwhile social worker Jayda Kavanagh totally believes Tiffany did not kill the younger child. She demands the new lawyer do a better job than the previous one did. As Jayda and Simon begin to fall in love, both are also charmed by the young girl on trial. However, besides understanding THE CHILD COMES FIRST, all three have issues to overcome if relationships are to forge permanently. This entertaining romantic legal thriller works because the lead couple of this aptly titled tale focuses on defending the child over their attraction. The story line is fast-paced from the moment Derek picks up the pro bono defense of Tiffany and never slows down as he struggles with issues left by the previous lawyer, his client's history and brooding reluctance to speak, and his desire for Jayda. Her idealism matches his skepticism as fans will enjoy this fine contemporary. Harriet Klausner
Copyright © 2020 Thriftbooks.com Terms of Use | Privacy Policy | Do Not Sell My Personal Information | Accessibility Statement
ThriftBooks® and the ThriftBooks® logo are registered trademarks of Thrift Books Global, LLC