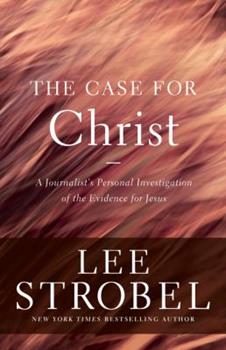 The Case for Christ: A Journalist's Personal Investigation of the Evidence for Jesus

A SEASONED JOURNALIST CHASES DOWN THE BIGGEST STORY IN HISTORY Is there credible evidence that Jesus of Nazareth really is the Son of God? Retracing his own spiritual journey from atheism to faith, Lee Strobel, former legal editor of the Chicago Tribune , cross-examines a dozen experts with doctorates who are specialists in the areas of old manuscripts, textual criticism, and biblical studies. Strobel challenges them with questions like How reliable...

Published by great book , 1 month ago
I came to this book as a practicing Catholic, but not knowing anything of the historicity of Christianity. I found the book intellectually satisfying and I also liked that this was written by an experienced and highly educated journalist who could apply the rigors of journalism to his investigation of Jesus Christ.

Published by Shermonicia Slaughter , 1 year ago
I bought the wrong book This is the workbook not the actual book itself

Published by Thriftbooks.com User , 13 years ago
I ordered a used book at a very low price. It arrived promptly and was in excellent condition.

The case for Christ

Published by Thriftbooks.com User , 14 years ago
Excellent Book! This is especially good for those who would question the validity and the accuracy of the Bible. It takes the reader through interviews from historical, archealogical, and medical perspectives. It documents the sweating of blood in the Garden of Gethsemane as a true medical phenomenon. Rare but true nontheless. The author sets out to disprove Christ's claims with some surprising results. Thumbs up!

This book is only for the BEGINNER, NOT ADVANCED STUDENT

Published by Thriftbooks.com User , 23 years ago
For those who have bothered to read the previous reviews, you well know that some skeptics claim the book is shallow and uninformed, while some Christians imply it is the end-all-beat-all to the Jesus issue. So considering the one-line summary review I gave, I think Strobel's work deserves 5 stars FOR AN INTRODUCTORY. He does cover a broad range of issues in a little space! Nowhere does he say he is going to make an unbiased presentation of the evidence. In fact, he explicitly said he wanted the readers to act as a jury. At any rate, you can't possibly compare this book to a scholarly work -- IT WAS NEVER INTENDED TO BE AS SUCH. If you really want to dig deeper, there are PLENTY of other works which deal with the Jesus controversy more in depth. I know that means doing weeks worth of library work, but if you really want to get at the truth of anything, it takes hard work!! The Net: Simply accept the book as a good solid introduction into the issues surrounding Christianity and grow beyond Strobel's book. It meant as an introductory and nothing more!

an excellent primer for the orthodox view of jesus

Published by Thriftbooks.com User , 23 years ago
Strobel, I'm sure, didn't set out to provide an exhaustive list of evidences for the existence, deity, and resurrection of Christ. That would require a much longer, and tedious, book. He does, however, provide sufficient evidence. While a skeptical reader may not be convinced after reading the book, he cannot say that there is no or little evidence for the authenticity of traditional christian belief. Whether he believes the evidence is a different matter altogether. Strobel, therefore, provides a lengthy bibliography for those who want to do a more extensive study on the subject. In addition, he provides resources written by Crossan, Martin, and other non-believers. This indicates to me that Strobel is not afraid to let the reader see both sides of the issue. Most books on Jesus that i've read written by liberal scholars almost never point readers to resources that expound an opposing view. For a more scholarly (yet highly readable) treatment of the orthodox view of Jesus, I'd recommend The Historical Jesus by Gary Habermas, and Jesus Under Fire by M. Wilkins and J.P. Moreland.As for the negative review dated Sept 11, 1999, the reviewer states that Palestine didn't become a roman province until 6 a.d. This is simply false. Any perusal through a book on Roman or Palestine history will show that Jerusalem was conquered by Pompey in 63 BC.
Trustpilot
Copyright © 2022 Thriftbooks.com Terms of Use | Privacy Policy | Do Not Sell or Share My Personal Information | Accessibility Statement
ThriftBooks® and the ThriftBooks® logo are registered trademarks of Thrift Books Global, LLC