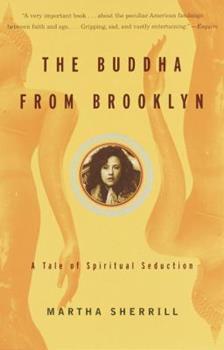 The Buddha from Brooklyn: A Tale of Spiritual Seduction

Dubbed a reincarnation of a sixteenth century Tibetan saint, Catharine Burroughs embarks on a journey from her working class American hometown to her recent founding of a monastery outside of Washington, D.C.

The Life-Story of a Predator

Published by Thriftbooks.com User , 14 years ago
The Life-Story of a Predator This is a beautifully written, hard-to-put-down biography of Alyce Zeoli, a woman who was once near the pinnacle of Tibetan Buddhism's hierarchy in the Western world, adored by her acolytes and students and recognized as a Tulku, an incarnate spiritual teacher, by one of the most revered leaders of Tibetan Buddhism (the same leader, incidentally, who recognized Hollywood slash 'n gash star Steven Seagal as an incarnate spiritual teacher). Zeoli's is a sad and scary story. Sad, because this transparently self-promoting narcissist was - and still is in some quarters - accepted as a teacher of profound subtlety and wisdom. Scary, because in spite of her odious and copiously documented abusiveness, self-absorption and immersion in materialism, she nonetheless has her defenders. Some people - and there are superlatively intelligent, sincere and devoted seekers among them - will accept everything and anything, particularly if it comes clad in saffron robes, no matter how repulsive, predatory and devoid of virtue her conduct. Her treatment of her (ex) partners, her business associates and her followers tells all. If "beauty is as beauty does" then this baleful counterfeit of a spiritual teacher is truly gruesome to behold. Martha Sherrill's prose is elegant: like the best of writers, she "shows" and doesn't "tell." Non-judgmental to the end, Sherrill leaves it to her readers to make their own assessment of "Jetsunma's" numbing hunger for power, wealth and - most elusive of all - respectability. I emphatically recommend this book to anyone interested in the subject of what has come to be called "spiritual abuse" as well as in Buddhism, particularly Buddhist monasticism and particularly its Tibetan expression.

Published by Thriftbooks.com User , 16 years ago
Over the past two years I have visited Jetsunma's temple in Poolesville MD many times. I have first-hand experience with it, and I have talked with some of the people who are described in the book. Based on my own experience I can say that Martha Sherrill's book is an accurate portrayal of Jetsunma, her temple, and her followers. Everything I have seen myself is consistent with Sherrill's book. I first visited the temple because I was looking for expert instruction in Buddhist meditation practices and/or "lo jong" (mind training). I did not find it. I soon found that I was already more knowledgable about such things than even the "ordained" monks. The only meditation training I found was so superficial that you might as well just go buy Herb Benson's book "The Relaxation Response". At the temple I almost immediately got a gut-level feeling that something was wrong here. Subsequent visits only made that feeling increase. The people at the temple seemed to avoid me. I found them evasive and difficult to engage in conversation. No one could explain what the 24-hour prayer vigil was about, or even what "prayer" meant to a Buddhist. I heard Jetsunma speak at one of her visits to Poolesville, and it was like a time-share sales pitch. It was a high-pressure pitch to become one of her students. It was both peculiar and disturbing. On another occasion I heard an announcement from Jetsunma (delivered by proxy) that the lack of maintenance on the stupa garden had caused her to fall ill. Unpaid landscaping work however would remedy the situation. At that point I finally realized that Jetsunma's followers were crazy. I thank Martha Sherrill for alerting the world to an organization that looks like a Buddhist temple, but which is really a dangerous cult.

The things people will believe! You gotta read this one!

Published by Thriftbooks.com User , 19 years ago
Totally engrossing! This is a must read for anyone interested in the inner workings of a cult -- and hopefully for anyone contemplating the experience of any irrational system of thought, particularly any that demand uncritical devotion to a charismatic leader.Just imagine: The same old Tibetan lama who decided the action-movie "actor" Steven Seagal is a reincarnated exulted lama discovers this "big-haired, much-divorced Brooklyn-born Jewish-Italian woman" -- and she's one too! She was already a practicing psychic: working out of her basement, giving readings, channeling, claiming that in past lives she was, among other things, a ruler of galaxies -- and she already had the charisma necessary to inspire a cadre of middle-class New Age believers. But look out now! Suddenly, she's Jetsunma Ahlon Lhamo, with all the pedigree and credentials of a reincarnated perfectly compassionate whatever, come to help all sentient beings -- and Lord Acton's take on what power does to the powerful never seemed more apropos -- or more tacky.Throughout the book, you keep asking incredulously: What WILL this woman do next? You never cease to be amazed -- and often disgusted -- as her shenanigans turn more and more lurid. From the way she's shown to walk all over her followers: seducing them, working them till some of them literally drop, taking their money, belittling them, even telling them they'll go to a Buddhist hell if they leave her sway (yet most of them love her and keep coming back for more, though some do manage to escape her dominance) to the really sick stuff, like when Jetsunma publicly browbeats -- and savagely beats -- an errant monk and nun, or the time she hosts a "Divorce Party," attended by her compassionate American-Buddhist followers, and an effigy of her ex-husband is stabbed, driven over with cars, and ultimately urinated on!There's plenty of pathos and frustration in why her followers, some of whom come across as quite charming and sympathetic, put up with all this: how willingly they accept Jetsunma's version of "Correct View" (sound like 1984?), how they can believe their fantastic mental structures are any more real than the material world that everyone seems to experience (the so-called illusory samsara), how they constantly overlook their leader's incredibly blatant hypocrisy. That old saw about actions speaking louder than words never seems to surface around an enlightened being who can do no wrong, whatever she does -- though even the Dalai Lama himself counsels: "The problem with the practice of seeing everything the guru does as perfect is that it very easily turns to poison for both the guru and the disciple . . . . Should the guru manifest un-Dharmis qualities or give teachings contradicting Dharma, the instruction on seeing the spiritual master as perfect must give way to reason . . ."Jetsunma seduces a number of her followers -- literally (she tells another lama she knows how to pick 'em) -- into becoming nuns and monks renouncing

Life and Times of a Material Girlru

Published by Thriftbooks.com User , 20 years ago
This is a terrific book. Many of the reviewers here have commented on the virtues and flaws of the spiritual leader of this group, Catharine Burroughs, known to her community as Jetsunma. I was interested in the other side of the equation that Martha Sherrill explored: the behavior of the folks who became her devoted students. Some people joined this group when they were very young, and it is not surprising that some of these young converts later concluded that they had made the wrong decision in choosing this person as their teacher. But many of the people who joined came to KPC as mature adults - intelligent, often well educated. Many had all the indications of a good life - they held responsible jobs, were married to someone they loved, were good parents to their kids. And yet they made the decision to abandon their own autonomy and hand over decision-making about personal matters in their lives to their teacher. They were prepared to follow her directions not only with respect to spiritual matters, like whether they were World Prayer Center members or actually Tibetan Buddhists, but also with respect to the decisions in their personal lives, like whether they should separate from a spouse and how they should raise their children. And yes, they were prepared to work fingers to the bone so that they could contribute as much money as possible to KPC, even though they knew that much of the money was going to support their teacher's extravagent lifestyle. They could believe themselves to be compassionate because their teacher told them that prayer for the world made them so, and yet- apparently without reservation - join the mob mentality in attacking anyone she condemned. Every human, including individuals like Catharine Burroughs and Steven Seagal, both of whom have been identified by Penor Rinpoche as Tibetan lamas in a previous life, has a dark side as well as a light side. The people who chose Catharine Burroughs as their teacher endorsed her opinion that she was a divine being, perfect in all ways - someone without a dark side. And we all know what happens to us flawed humans when we fail to recognize our own dark side: we end up projecting it. It doesn't disappear, it just re-emerges in other ways. Is it so surprising then that this teacher, who was herself sexually active, would turn with such venom on a young nun who had engaged in a much more innocuous relationship? In one of his book - Path with a Heart, as I recall - Jack Kornfeld discussed the reasons why spiritual teachers in the Buddhist tradition (and others for that matter) can end up going astray, and having problems with alcohol, sexual involvements with their students, money. Students have a role to play in discouraging inappropriate behavior by teachers. People who seek the spiritual path should not blindly follow a teacher. They should use their own talents - wisdom, intelligence, discernment, common sense - when there is a dissonance between what the teacher teaches and wh

A remarkable book about the spiritual search and its perils

Published by Thriftbooks.com User , 21 years ago
This book is truly an excellent balance of objective reporting and subjective response to a very complicated religious center and spiritual teacher. Because I knew Alyce/Catharine/Jetsunma during the years she trained as a spiritual leader with Jim Goure in North Carolina, and I have closely followed here career since then, I was worried that Martha Sherrill would either be gullible about A/C/J's spiritual teachings and techniques, or that she would do a hatchet job that did not understand the sincerity with which so many practice Tibetan Buddhism. I am greatly relieved to have this story told with fairness and compassion, in all its glory and ugliness. My greatest feeling about the KPC story is that we Americans do not have great spiritual sophistication. Just because someone is a reincarnated something, or has psychic ability, or has the charisma to hold a group together, we mistakenly believe they are also spiritually advanced and trustworthy. As I see it, the proof is in the pudding. The negative behavior of religious leaders of all sorts who are addicted to their own followers troubles me greatly. I don't care who you WERE, I care who you are now. Do you live a life of kindness and compassion? Is your purpose to serve others and not your own ego? Do you give more than you get? Do you judge not lest ye be judged? These are the building blocks of good karma, and no "spiritual teacher" should tell you otherwise. We all have a Buddha-nature, we are all relations, we are all children of God. That's the way it is.
Copyright © 2020 Thriftbooks.com Terms of Use | Privacy Policy | Do Not Sell My Personal Information | Accessibility Statement
ThriftBooks® and the ThriftBooks® logo are registered trademarks of Thrift Books Global, LLC