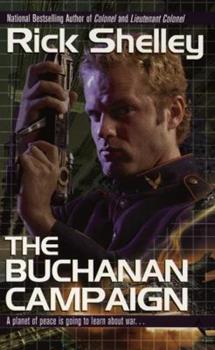 (Book #1 in the The Federation War Series)

This description may be from another edition of this product. From the NATIONAL BESTSELLING AUTHOR...a deep-in-the-trenches epic of interplanetary warfare. A battle for control between the Federation and the Second Commonwealth explodes - with the planet...

Published by Thriftbooks.com User , 14 years ago
The Buchanan Campaign is, at best, a bus or train book. Not that it's bad but it's not great either. The plot is simple - a poor, defenseless, planet that never harmed anybody and isn't worth a penny has been invade by the Big Bad Guys. The story is pretty simple after that. The Second Commonwealth has been asked to come to the planet's aid and beat back the Federation. The part that really hurt the book was all the minor characters that died just to try to make the reader respond. That's the only reason the minor characters were made - to die. And their deaths did nothing to push the story or plot along. The ending also seemed a tad railroaded - the author was going from point A to point B no matter how the characters felt about it. The good part is the Big Bad Guys are neither stupid nor cowards. The Federation ground troops have a few tricks up their sleeves and the Federation Navy isn't about to leave without a fight. So the tactics and battles, while not as well crafted as I would like, are not as bland as they would be if the Big Bad Guys were also idiots or plain EVIL.

The War Comes to Buchanan

Published by Thriftbooks.com User , 18 years ago
The Buchanan Campaign (1995) is the first military SF novel in the Second Commonwealth series. The Confederation of Planets claims hegemony over all human worlds and thus is offically in a state of war with all independent planets. Heretofore, the war has been more ideological than active, but recently the Federation has attacked the Second Commonwealth at Camerein. Buchanan is an independent world in the space between these governments and now the war has come to it. In this novel, Doug Weintraub is out hunting when flashes and sonic booms in the sky cause him to return to his home and set up a comlink with the other six commissioners. They are informed that Federation troops have landed and are advancing upon Sam and Max, the two small cities of Buchanan. Then one of the commissioners is captured by the Federation soldiers. Doug leaves the conference and launches the emergency message rocket in his barn to report the problem to the Second Commonwealth and then takes to the hills with his hunting gear. Later, he gathers together a few other men and they plant exposive charges on the Federation shuttles parked at the spaceport. When the Buchanan message rocket arrives in the Buckingham system, the Second Commonwealth promply sends the Second Regiment of the Royal Marines to Buchanan. The HMS Sheffield and her escorts arrive two weeks after the shuttle sabotage and immediately attack the single Federation Cutter-class warship in orbit around Buchanan. Despite all efforts to intercept the ship, it manages to transit to Q-space and flee the system. This establishes a time limit on clearing out the Federation ground troops, for the escaped ship will surely bring rapid reinforcement by the Federation. The marines are landed by shuttle and surround the area containing Sam, Max, and the spaceport. As they land, the Federation troops quickly turn off their helmet electronics to eliminate their obvious signatures and then relocate to other positions, so the Commonwealth marines do not know the present location of the enemy. The Intelligence & Reconnaissance platoon sends out patrols to try to locate the estimated battalion of enemy soldiers in the area and one such patrol walks into an ambush. As they return fire, another party -- the Buchanan group -- also takes the Federation troops under fire. After an air assault and ground reinforcements take out the Federation unit, the leader of the marine patrol, Sergeant David Spencer, takes the Buchanan irregulars back to the I & R platoon and introduces Doug to the regimental commander. They feed and outfit Doug's men and make arrangements to scatter them as local liaison among the various marine units. This willing cooperation by the Buchanan men greatly pleases the political liaison, Prince William, since it should facilitate a longer range association with the Second Commonwealth. Needless to say, the Federation reinforcements arrive at some point and make life difficult for the Commo

Published by Thriftbooks.com User , 22 years ago
Rick Shelley has extrapolted another possible future of our expansion into the vast ocean of space, which appears to reflect historical events. In his book "The Buchanan Campaign," Rick Shelley, gives the reader a snap shot of have suddenly life can change for individuals, worlds, and large political powers. I feel that Rcck Shelley has done a great job in developing all the major characters in the book. This book is well worth reading. Further, I recommend his other two series "The Dirigent Mercenary Corps" and "The 13th Spaceborne."

Most Entertaining Sci-Fi Book Ever

Published by Thriftbooks.com User , 23 years ago
This is the best book that I have ever read, After reading this I went to every book store in search of more books by Rick.

Published by Thriftbooks.com User , 23 years ago
Great start of a new trilogy set a thousand years in the future, and in human colonized solar systems far, far away. The twist that sets this above most contemporary military sf is the uniqueness of having the Second (British) Commonwealth being a major power in space -- while the pseudo-democratic Confederation is the enemy. The story is well told and focuses more on the human condition than on "Big Science". In fact, I was surprised at how Shelley's future was so very familiar in terms of both science and human nature. Recommended.
Copyright © 2020 Thriftbooks.com Terms of Use | Privacy Policy | Do Not Sell My Personal Information | Accessibility Statement
ThriftBooks® and the ThriftBooks® logo are registered trademarks of Thrift Books Global, LLC