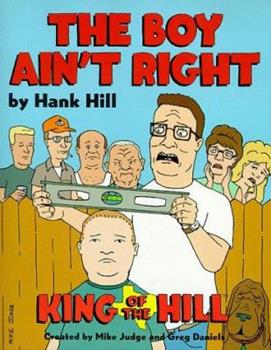 Dedication "Writing a book is rarely the work of just one person. In this case, it was. But I couldn't have done this all by myself if it weren't for the invaluable support of my wife, Peggy Hill. She was always there for me as I worked late into the night, with an encouraging word ... a cup of coffee ... a re-write or two ... or simply typing the entire manuscript from the notes I scribbled on the back of a napkin or called in to our answering machine...

A must read for any King of the Hill fan!

Published by Thriftbooks.com User , 13 years ago
This book is great! In the other reviews, people said it seemed like it had little to do with the characters, including mention that Hank was born in Texas, when most fans know he wasn't. But what those reviewers failed to realize is that this book came out during the second season, long before Hank himself knew where he was born. And since the book is supposedly written by Hank, this is understandable. The characters in the first few seasons were rawer and edgier, a different flavor of the later years. And this book captures the life and outlook of the first few seasons wonderfully! If you're a fan of KOTH, and I mean a REAL fan, you need to read this!

hank hill was not born in texas

Published by Thriftbooks.com User , 19 years ago
Hank wasn't born in Texas but in New York. Did you actually ever watch the show?

Published by Thriftbooks.com User , 24 years ago
Somebody needs to get this book more publicity. IT'S GREAT! I came upon it by accident but I'm very glad I did. Hank Hill's wit and wisdom are priceless. I'm a new father and plan on using his advice on raising my son. That is if my wife doesn't find out. Get this book. It will keep you laughing long after the show ends.

A good Southern heapin' of lit.

Published by Thriftbooks.com User , 24 years ago
This book was funny as they come. They really hit the nail on the head when they created this Hank Hill character. It blends in perfectly with the show - which I watch religiously - and was so good I shared it with my own father. He had a bigger laugh than I did.

This is simply a great, funny book

Published by Thriftbooks.com User , 24 years ago
Whether you're a fan of the show or not, this book is not only a great, hysterical read -- it really will make a great Father's Day gift. In preparation for the occasion, all the writers (most of whom write for the show) have included precious acknowledgments to their fathers in the back. It doesn't hurt to have watched and appreciated the show as much as I have, but most dads will get the picture and have a riot doing so. Cotton Hill's "How I Failed with Hank" section is just insanely funny, as are many of the other spreads in this wonderfully funny and (believe it) heartwarming book. I give it three thumbs up!
Trustpilot
Copyright © 2022 Thriftbooks.com Terms of Use | Privacy Policy | Do Not Sell My Personal Information | Cookie Preferences | Accessibility Statement
ThriftBooks® and the ThriftBooks® logo are registered trademarks of Thrift Books Global, LLC