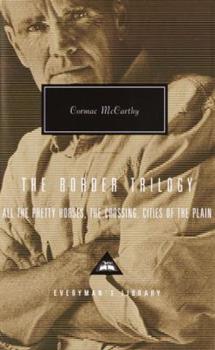 The Border Trilogy: All the Pretty Horses, the Crossing, Cities of the Plain

(Part of the The Border Trilogy Series)

Available together in one volume for the first time, the three novels of Cormac McCarthy's award-winning and bestselling Border Trilogy constitute a genuine American epic. Beginning with All the Pretty Horses and continuing through The Crossing and Cities of the Plain , McCarthy chronicles the lives of two young men coming of age in the Southwest and Mexico, poised on the edge of a world about to change forever. Hauntingly beautiful, filled with sorrow...

Published by Thriftbooks.com User , 16 years ago
Here are three amazing books, and one amazing saga, all together in one brimming volume you can throw into a backpack. The first novel, "All the Pretty Horses" is one of the most beautifully told stories I've ever read. Not only is the writing here packed with imagery, and the story one of McCarthy's most accessible, but the textures of the words used to describe the images are as lush and as enfolding as anything F. Scott Fitzgerald ever wrote--even when McCarthy's describing the driest of desert plains, the most desolate of ruins, or the emptiest of lives. The book tells the story of two young friends who leave home in 1948 Texas to ride south into northern Mexico in search of SOMETHING. What happens along the way is tragic and amusing, lovely and gripping, real and amazing. McCarthy seems to paint every scene perfectly, yet he does so using the fewest amount of words possible, and the simplest of details. "The gray and malignant dawn." "Stars falling down the long black slope of the firmament." "The shelving clouds." "Their windtattered fire." "Narrow spires of smoke standing vertically into the windless dawn so still the village seemed to hang by threads from the darkness." Long sentences shroud the reader in the events of every scene, and the author's trademark quote-sign-less dialogue gives every conversation a very biblical feel. The trilogy's second book, "The Crossing" has only thematic and geographical elements in common with the first. The story deals with a completely different character, Billy Parham, a son in a late-1930s New Mexican ranching family. Billy traps a wolf that has been killing his father's cattle but realizes he morally can't kill it and has to return it to its home in the mountains of old Mexico. Billy crosses the border into Mexico, and as he does he crosses from real life into a world of dreams, where everyone moves as if the air was liquid, where every ruin has an irretrievable story, where soot and heat and danger hang in the air, and where nothing ever goes as planned. The story is not as streamlined or as focused as its thematic predecessor, "All the Pretty Horses," but that's not necessarily a shortcoming. The book sprawls out like a wide hot desert--curling north and south, east and west, across the present and into the past. The writing is as good as any writing I've ever read ever, and certain metaphors and feelings will stay with you for years. For example: the coals of a campfire seeming like an exposed piece of the core of the earth. The trilogy's concluding part is "Cities of the Plain." The book has some shortcomings, but it's still one amazing piece of work. YOU try writing something this good. In this book, John Grady Cole--the genius horsetrainer of "All the Pretty Horses"--and Billy Parham--the kindhearted nomad of "The Crossing"--come together as ranch hands on a New Mexico estancia. Here, you can see why this actually is a trilogy. Both characters are older than they wer

Hemingway gets even more depressed...

Published by Thriftbooks.com User , 19 years ago
McCarthy is a masterful author. There is no other author who can paint a stark but beautiful vision of what it means to be human and to exist in history. I was first introduced to him in highschool and have since then read every single one of his books. My favorite would be "All the Pretty Horses" followed by "Cities of the Plain". "Blood Meridian" is not in the Trilogy but follows in third. I never saw the movie, "All the Pretty Horses", because I am an utmost purist. There can be no improvements upon this set of books as a whole and certainly Hollywood should not be the first to try. They are too magnificently crafted for even pictures to begin to create the same world as McCarthy does in his own novels. He is a thoughtful and bleak writer and if "The Old Man in the Sea" got to you, then certainly the Trilogy will.

Published by Thriftbooks.com User , 20 years ago
The books of Cormac McCarthy's Border Trilogy have been well received individually, and yet none of them has been received well-enough... What we have in these three books are three works of genius, vivid, thrilling, heartbreaking, individual stories of astounding specificity and realism which nevertheless pull larger stories, the story of the American West, the story of unspoiled wilderness, the story of our own national romanticism, along with them.The protagonists are boys in love with the land, in love with an ascetic live on it, who are forced, through the series of stories, to watch that land change and whither and grow tame and bland. The boys quarrel, fall in love. They are prey to violence, to loss. They are, for the most part, taciturn, and yet McCarthy's extraordinary skill puts meaning into what they do not say, their silences, their gestures.I have read the first two books twice. I have not re-read the third yet because I have not recovered emotionally. But the reading of that third started a chemical reaction that made it seem as though I had read the first two a third time, and brought a new, fuller meaning to all my literary experiences with the trilogy.A great stylist, a superb story-teller, a poet, and a profound psychologist, McCarthy is, in my opinion, the best writer in America. I see him viewed and admired, in fifty years, as Hemingway, Faulkner, and Fitzgerald are now. I would like to be one person who gets a jump on this eventuality.PG

The best novels with a sense of place since Faulkner.

Published by Thriftbooks.com User , 21 years ago
These three novels should establish Cormac McCarthy as a worthy inheritor of the mantle worn by William Faulkner. The first, All The Pretty Horses is probably the best because it introduces John Grady Cole, who should join the ranks of legendary fictional heroes. His story is concluded in Cities of the Plain the last of the trilogy which contains an account of a knife fight that is almost unbearable in it intensity. The second novel,The Crossing is in my opinion, the weakest of the three,although the first 100 or so pages which describe the relationship between a boy and a wolf he has trapped is as good as anything in the trilogy. McCarthys description of ranch life on the New Mexico-Mexico border in the 1940s and early '50s is so pure that one can almost feel the icy wind as it cuts through the characters as they ride south to meet their fate in old Mexico. This is a great book and Cormac McCarthy is among the greatest novelists of our time.
Trustpilot
Copyright © 2022 Thriftbooks.com Terms of Use | Privacy Policy | Do Not Sell My Personal Information | Accessibility Statement
ThriftBooks® and the ThriftBooks® logo are registered trademarks of Thrift Books Global, LLC