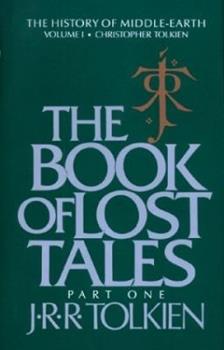 The Book of Lost Tales (History of Middle-earth)

Newly reissued in hardcover, these editions are the first two volumes of TheHistory of Middle-earth. Includes early accounts of Gods and Elves, Dwarves, Balrogs, and Orcs and of the cosmology and geography of their invented world.304/400 pp.

Not the edition pictured

Published by DFlaig , 8 months ago
Did not receive edition pictured

What was sent to me was part two not part one

Published by DownRiver , 1 year ago
I have read them before and goes with the other tales like a binding

Published by TenSoon , 2 years ago
Love the Book of Lost Tales Part 1 and 2! Thought I would clarify that “The Fall of Gondolin” is in Part 2, not Part 1 as indicated by another person’s review. Definitely recommend for anyone who has read the Silmarillion!

Great book: the best of the lost tales

Published by Thriftbooks.com User , 15 years ago
I guarantee that this book is the best of the lost tales series of Tolkien. It has much to offer, and goes on great detail over each of its stories. Most important for me was the detailed war of gondolin, and the tale of Tuor. When I read the Silmarillion, this tale went a little quick to give way for the voyage of earendil. I thought they gave too much attention to beren and turin and a lot less to Tuor. This tale complements the Silmarillion perfectly, and also offer new insight into other stories of Tolkien.

"Who was Iluvatar? Was he of the Gods?"

Published by Thriftbooks.com User , 19 years ago
"The Book of Lost Tales, Part 1" is the first of two volumes containing the very first versions J.R.R. Tolkien wrote of the legends that ultimately formed "The Silmarillion". He began writing these stories during World War I, and his quest for perfection in their form and presentation was so rigorous that he was unable to publish any version of "The Silmarillion" before his death in 1973. His son Christopher edited "The Silmarillion" for publication and followed it up with thirteen more volumes of his father's writings on Middle-earth and Valinor: "Unfinished Tales" and the mammoth twelve-volume series "The History of Middle-earth," of which "The Book of Lost Tales" comprises the first two volumes."The Silmarillion" itself fails to appeal to many readers of "The Hobbit" and "The Lord of the Rings," and the thirteen tomes that followed it will have even less appeal to such readers (except perhaps for the four volumes that show how Tolkien went about writing LotR). However, for Tolkien aficionados the History series (affectionately abbreviated HoMe) is essential reading, and "The Book of Lost Tales, Part 1" is not only its beginning but one of its most important volumes. In it are found versions of the early stories of "The Silmarillion" (the birth of the Two Trees, the coming of the Elves to Valinor, the flight of the Noldoli or Gnomes, later renamed the Noldor by Tolkien, into exile, and the making of the Sun and Moon) which are far fuller than any later versions written by Tolkien, but the plots and nomenclature of which are still far from evolving into their final forms. Reading these stories is necessary to gain a full appreciation of the beauty of Valinor and of the Trees, the Elves' longing for which underlies all of Tolkien's work.Even those readers who dislike "The Silmarillion" should seek out this book in their local libraries for the sake of the first few pages of Christopher Tolkien's introduction, in which he explains the peculiar nature of "The Silmarillion" and why it inevitably has a different sort of appeal than that of "The Lord of the Rings," and thus may put off readers who enjoy the latter work. For Tolkien fans, "The Book of Lost Tales, Part 1" is highly recommended reading.

Behind the Scenes of Tolkien's Work

Published by Thriftbooks.com User , 20 years ago
The Book of Lost Tales shows you what wasn't included in the Silmarillion as well as some completely new stories, such as that of Eriol who learns of the origins of the Elves from his kinsmen. This shows you what Tolkien was conjuring up in the trenches during World War I. It's not really for those who are stuck only to the writing style of The Hobbit and The Lord of the Rings. You have to read the Silmarillion first before you can completely appreciate this work.

Published by Thriftbooks.com User , 21 years ago
Do you love the fiction of JRR Tolkien? Are you interested in the very beginning of the legends? The stories that evolved into "The Silmarillion"? Then you must purchase "The Book of Lost Tales, part 1". Here you will find, thanks to the loving research and editing of Tolkien's son Christopher, the first beginnings of the stories, legends and poems that became Tolkien's life work. Begun during the First World War, the legends occupied the remaining 55 years of Tolkien's life.You cannot begin to fully appreciate "The Lord of the Rings" without reading "The Silmarillion" -- and this volume provides the very beginning of what became "The Silmarillion".

"The Book of Lost Tales", a second "Silmarillion"?

Published by Thriftbooks.com User , 24 years ago
This book gives great insight to Tolkiens first ideas of Middle-Earth, the first ideas of Orcs, Elves, Balrogs, Valar and Ents. The seafarer Ælfwine (or Eriol, his name given by the Elves), comes upon the Elven island Tol Eressea, where he finds the city of Kortirion and the friendly elves Vaire and Lindo, who gives him a place to sleep and rest for several days. On the island his great lust for seafaring ceases, and he starts to learn the true story of the World from the Elves. He is told about the great Valar, the terrible Morgoth, the glory of the Early Days, and of the highest himself: Eru Iluvatar. This is a magnificent work which combines Tolkien's magic of writing with a anazing mytology, simply a masterwork, yes i would say a second Silmarillion
Trustpilot
Copyright © 2022 Thriftbooks.com Terms of Use | Privacy Policy | Do Not Sell My Personal Information | Accessibility Statement
ThriftBooks® and the ThriftBooks® logo are registered trademarks of Thrift Books Global, LLC