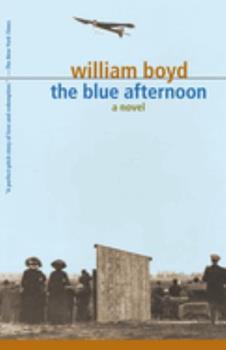 "A perfect-pitch story of love and redemption" (The New York Times), Boyd's atmospheric new novel confirms his reputation as heir to the grand narrative traditions of Joseph Conrad and Somerset Maugham. In 1936 Los angeles, as her long-estranged father tells architect Kay Fischer the story behind her secret parentage, he plunges readers into a tale of grisly murders and an illicit passion that still obsseses him 30 years later. 384 pp. Author tour...

Love story from a man's angle, with plot aplenty

Published by Thriftbooks.com User , 20 years ago
As a woman, if you're ever so slightly bored of modern women writers, this is for you. William Boyd's achingly beautiful writing weaves an engrossing plot involving, but not limited to, a love story told from the man's point of view. And it's refreshing to read of a man's utter devotion, told ungushingly but with such feeling and realism. In addition to the love, there is the story set mostly in the Far East, a little murder, infidelity, characters which jump out at you but allow you to fill in the gaps.... and a prologue that will have you desperate to drop the kids off at school and leave them there all week while you finish. This is a book for everyone, and the only criticism is that you won't want to read anything else once you're done!

Published by Thriftbooks.com User , 21 years ago
This novel spans half a century and half the world. The novel's unconventional structure works beautifully with the writer's strong sense of story, character and suspense. On the surface there are stories and histories of medicine, architecture, flight, war, politics. Beneath the surface an insistent exploration of the evolution of love and the secrets that bind people together.

Published by Thriftbooks.com User , 22 years ago
Superficially, it's tempting to pidgeonhole William Boyd's "The Blue Afternoon" as a thriller. For much of the way, you may find your heart racing and yourself thinking you can't put this down until you reach the end. But at the heart of this wonderfully entertaining novel is a romance, a romance so huge and heady it's almost redemptive in its force. The thriller elements of murder, blackmail and betrayal only create the opportunities and subtext for the great love affair to play out. Some readers may find the Salvador/Delphine affair surprising and even incredible. You wouldn't if you allow yourself the luxury of accepting Cupid's strange ways. But what's even more intriguing to me is Boyd's ability to generate a deep sense of sustained ambivalence in the treatment of his characters and their personal situations throughout the novel. You're never sure enough about any of them to rule anything out. For instance, Salvador's Filipino colleague, Pantaleon, shows a surprising side to him under pressure. Delphine also remains an enigma, right to the very end. Boyd's reluctance at a clear resolution perhaps hints at how he really wishes us to regard his novel, not as a "who dunnit" but as a sojourn with the human heart which needs Love and Romance to nourish and keep it alive. Kay, Salvador's daughter, isn't a technical devise or a red herring either. She may be an observer and peripheral to the plot which is told in flashbacks, but we are told she's one of two reasons why Salvador has managed to gain strength to survive his personal tragedy. "The Blue Afternoon" is an engaging and superbly written novel. Highly recommended reading.

Published by Thriftbooks.com User , 24 years ago
The opening lines of this book grabbed me like few others, compelling me to read on. Granted, the plot didn't always proceed as expected, but that ain't no sin. It has been said that the characters in this story have not been fully developed, but to me the central characters appeared clearly enough. Maybe the reader doesn't get to know them completely, but he does get to know as much about them as is necessary for the development of the story. Boyd weaves several stories into the plot, and his evocative storytelling pulls the reader in. Again, the book has been criticized for giving away the ending, but this isn't a mystery novel, so who cares; thousands of readers will know how novels such as The Old Man and The Sea or The Remains of the Day turn out, but that in no way detracts from the sheer joy of reading the words penned by the authors of those classics. Same here. The end pulses with life, love, and loss, all tempered by hope and desire, albeit unfulfilled. The final ten pages moved me as few books ever have, with understated passion and elegance, and the final 2 pages had me awestruck. Not for some, but a gem for others.

From the moment I read the prologue, I was hooked!

Published by Thriftbooks.com User , 25 years ago
A masterful storyteller, William Boyd captivates his reader from the onset. "The Blue Afternoon" is a wonderful and beautifully written story that encompasses romance, intrigue, crime, and passion, and one that truly holds the reader's attention from cover to cover. From the moment I read the incredible prologue, I didn't want to put this book down. There is a skillful blending of perspective here--the author (a man) has been eminently successfully in creating a story in which a woman is the narrator, and she, in turn, recounts the story of a man (her father)
Trustpilot
Copyright © 2022 Thriftbooks.com Terms of Use | Privacy Policy | Do Not Sell or Share My Personal Information | Accessibility Statement
ThriftBooks® and the ThriftBooks® logo are registered trademarks of Thrift Books Global, LLC