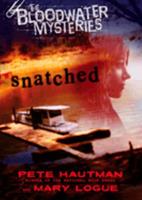 (Book #1 in the Bloodwater Mysteries Series)

From award-winning author Pete Hautman and Mary Logue comes a lively mystery series. When high school student Alicia Camden suddenly disappears, the small town of Bloodwater is in shock. And it's up to Roni Delicata, reporter for the school newspaper The Bloodwater Pump , and her brilliant sidekick, Brian Bain, to figure out what's going on. With suspects all around them and suspicions high, Roni and Brian risk their lives -- and a few groundings...

Published by Thriftbooks.com User , 12 years ago
Set in a small town in Minnesota, this mystery series features a girl detective/school newspaper reporter, Roni Delicata, who teams up with science geek Brian Bain, to solve crimes in their small town. In this book, their classmate Alicia, who lives in the fancy part of town and seems to have it all, has been beaten and then kidnapped--or so it seems. Roni can't resist sticking her nose in where it isn't wanted to solve a mystery, and manages to outsmart the police, with Brian at her side. Some violence in the story gives this mystery an edgier feel, suitable for slightly older tweens. A quick read, but with both humor and a darker side (child abuse enters into the story). Lots of action and a complicated plot will keep readers engaged with the story. There is a surprise, gender-bending twist in the story when the abuser turns out to be the mother rather than the stepfather, as we first think. This book is the first in a series featuring Brian and Roni. One nice aspect of this particular series is that, with a strong girl and boy character, it should appeal equally to both sexes. Pete Hautman has won a National Book award, among other honors, for his young adult novels; he is equally skilled at the mystery genre.

Published by Thriftbooks.com User , 14 years ago
My grandmother just bought me this book two days ago and already im done with it. I missed most of my favorite t.v shows because I lost track of time reading this great book. The characters make the story more realistic but if you want to find out about it you should buy the book. But I really didnt suspect that weird twisted ending I suspected more of a thriller. It was more like a confession!! D.A

Published by Thriftbooks.com User , 15 years ago
Alicia has been kidnapped. Can Brian and Roni find her kidnapper and save the day? That's the plot in a nutshell, but the complete mystery would fill a large, very complicated nutshell. Brian and Roni go to the same high school, but the only things they seem to have in common are frequent visits to the principal's office. Brian's a science nerd, and Roni is an ambitious reporter for the school paper. Alicia is a fellow high school student who has disappeared. This first in a series dubbed THE BLOODWATER MYSTERIES has Brian and Roni teaming up to solve the crime. For mystery fans this book has it all. There is the big old family house connected to a possible curse. Part of the adventure takes the crime-solving duo to Wolf Spider Island to deal with colorful characters like Driftwood Doug and a butterfly collector named Mr. Nestor. Add in a wacky police department, suspicious high school thugs who key cars, and a trip to Nun's Island to search for a missing boat, and you have just a few of the adventures in this fast-paced book. Pete Hautman, author of Godless and Mr. Was, combines talents with fellow Minnesota author Mary Logue, to create this new series. Fans of complicated whodunit tales will not be disappointed. Reviewed by: Sally Kruger, aka "Readingjunky"

A great read for reluctant readers

Published by Thriftbooks.com User , 15 years ago
Pete Hautman has long been one of my favorite authors. I have since discovered Mary Logue and have become a fan of her exquisite Claire Watkins mysteries. Each author writes compelling fiction filled with sympathetic and sometimes off-beat characters. I was pleased to hear they had teamed up to write a new mystery series for younger readers. As a former middle/high school teacher, I have consumed a great deal of juvenile and YA fiction. Frequently works written for a younger audience are dumbed down or "cuted up" which turns off already reluctant readers. In this case, however, Hautman and Logue write with respect for their audience and provide characters we can relate to, a fun adventure, and lots of laughs as Roni and Brian sort through clues while navigating relations with teachers and parents. This work will certainly delight younger readers, but I also recommended it for adults. It would make an entertaining read-aloud selection for any Language Arts or Reading teacher as well as for any parent who wants to laugh and puzzle along with their child. Bloodwater #1: Snatched provides us with a full-blooded male and female protagonist and with enough twists to satisfy the seasoned fan of the mystery genre. Despite a satisfying conclusion, this first installment leaves readers awaiting the next with anticipation.
Copyright © 2020 Thriftbooks.com Terms of Use | Privacy Policy | Do Not Sell My Personal Information | Accessibility Statement
ThriftBooks® and the ThriftBooks® logo are registered trademarks of Thrift Books Global, LLC